by William Sarradet May 8, 2021
FacebookTwitterEmail

Susan Sontag wrote in 2002 about war photography, a field of photojournalism that can allay and enable the troublesome voyeurism of suffering. Citing the many approaches to reporting and documenting the bloody conflicts over the centuries, Sontag articulates the double-edged utility of showing horrifying images to the public. In one passage, Sontage writes, “If governments had their way, war photography, like much war poetry, would drum up support for soldiers’ sacrifices.” One school of thought would train the viewer to think that such awful things must not be left in the clutches of night, hidden from view and excused through inaction. Ignorance is often a natural sluiceway to apathy. Another school of thought might ask: What kind of “documentation” apparatus pits three humans against each other — two to fight to the death, and one to film it?

Sontag presents these question around recording, or history making, because history is supposed to matter. The problem with photography, then, is whether the photo should be shown or not.

Artmaking — about horrible things, or simply the things that are or were — is also often an accounting around attitudes and cultural mores of the time. What is the responsibility of artists or art spaces, exactly, to create and show images that are as dark as the times in which they exist?

This question may feel specific to photography, as photographers return what they see through the camera back to us. For other mainline forms of art — painting, drawing, sculpture — artists must generate the image rather than capture it as it happens.

I’ve been thinking about these issues as current exhibitions unapologetically cover morose territories. The “culture” sphere is where the grim and serious nature of the world is given allowance to sort through itself. Many exhibition spaces throughout Texas have had enough obstacles in presenting new work to a socially-distanced audience, and now, understandably, they’re excited to have regular, in-person viewers again.

But for many shows, celebration is not the tone of the day. That’s to be expected in the realm of art — a reckoning with the heavier side of life. I’m left to wonder how the slant toward bleak-themed exhibitions, the sheer number of them, is perceived by those walking into shows for the first time in so many months; is it our responsibility to feel in synch with how bad things are?

As we encounter the ongoing reopening of Texas art spaces, and I take in shows in the region, I’ve considered contemporary art and current events from the last month with cautious, penitent optimism. 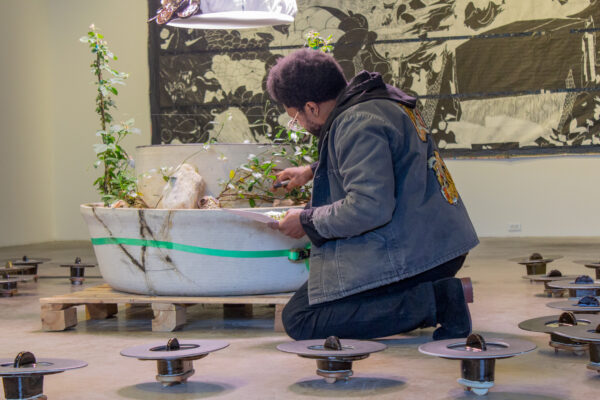 Xxavier Edward Carter’s triumvirate of shows (at Ex Ovo in West Dallas, the newly opened Cluley Projects nearby, and Carter’s Start Livin’ in the New World on view at The Nasher Sculpture Center) was expanded even further with a couple of performances which accompanied Anh Yēu Em, his ecologic installation at Ex Ovo. For The Failings of Man performance on April 19, Carter tended to blueberry plants surrounded by the ceramic containers constellating the floor, and sang quietly to a congregation clustered at the gallery’s bay door. The artist expected the plants to have born fruit by this time, but they had not yet. A pregnant stillness among the viewing group bore the charge of expectation, which is not uncommon to performance art. Gallery etiquette felt more nervous than practiced. Our collective reaction was unsure; the audience had forgotten when to clap. 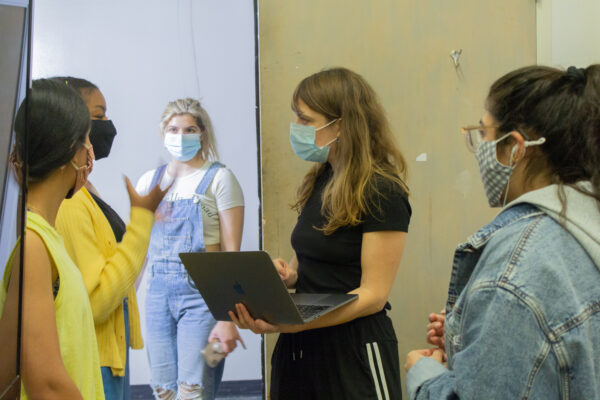 Despite so much isolation, collaboration in art is not foregone. SMU Visiting Lecturer in Sculpture, Tamara Johnson, facilitated DIY director and painter Claudia Bitrán to organize a whirlwind film shoot in the basement of SMU. Productions tend to involve interchanging groups (cast members, production crews, directoral staff and producers), which can mean a lot of work in close quarters. Seeing it happen again, now, in the labyrinthine maze that is the subterranean studio spaces of SMU, felt healing and reassuring. It helps to have the ubiquitously recognized movie Titanic as the string to hold together a creative group. Bitrán’s ability to whip disparate players into coherence is a strength, which in turn lends further relevance to the project. Under ordinary circumstances, unassociated persons inspired to create together is a gift. Under current circumstances, it feels like a superpower. 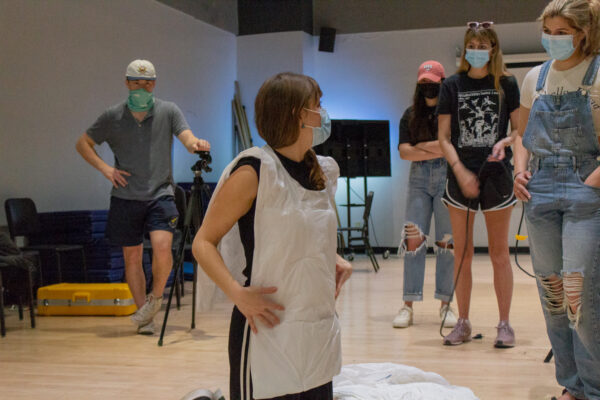 Three works by Beeple will be up for auction May 13, through Dallas-based Heritage Auctions. The auction house says it will be a “a decidedly frisky peek at the past, present and future of the definition of art.” What a sales pitch. On the artist’s website, a promotional video graphic makes it look like Beeple has developed physical artifacts to pair with the digital assets for sale. These shiny trophies, confirmations of the purchase of digital artifacts, prove that the digital sales game has plenty of retail legs (if you have a big name to attract collector interest). I suppose this is Beeple’s responsibility now: to outline strategies for digital artists who seek astronomic success. He’s the first NFT-maker to go to the moon, after all. 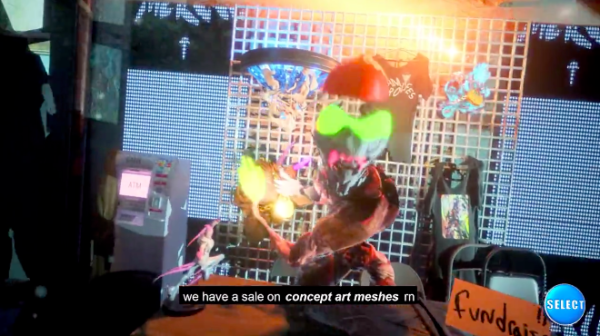 Team Rolfes, a VR production team (featuring Dallas-born VR painter Sam Rolfes, a graduate of UNT’s painting program) is developing a game, and its members are playing with NFTs to market it.

In a bunker party somewhere, a salesman offers rare conceptual art for an upcoming “physics” game. The sale includes digital meshes and in-game accreditation (a “Loud” ranking, to be exact). The trailer for these digital assets is among the many virtual avatars that Team Rolfes puppeteers in genre-bending skits, for events such as Houston’s Day For Night Festival and PC Music’s Pop Crypt Halloween showcase. The characters propped up by Rolfes’ hands are wiley and aloof. The sets of these scenes, additionally, appropriately play with the strangeness of the digital second-world.

The average price of an NFT sale is dropping, but the market isn’t settled yet. There’s lots of experimenting going on, and it will certainly continue to rumble around in the news cycle. Even with all its volatility, the NFT market continues to be a space to keep an eye out for interesting digital artists.

Evelyn From the Internets, as she is known on her confessional-style Youtube channel, is an online personality based in Austin. There are more communities on the streaming platform than one can count, and the best creators use their style and charisma to define their niche. Her Youtube video library spans nine years, and you can watch her interview Margaret Atwood, gab about a weekend of snacks, and scream about being featured on Beyonce’s Lemonade live tour. For her April digital residency with Welcome to My Homepage, she’s plattered a selection of audio-sensory experiences for us. 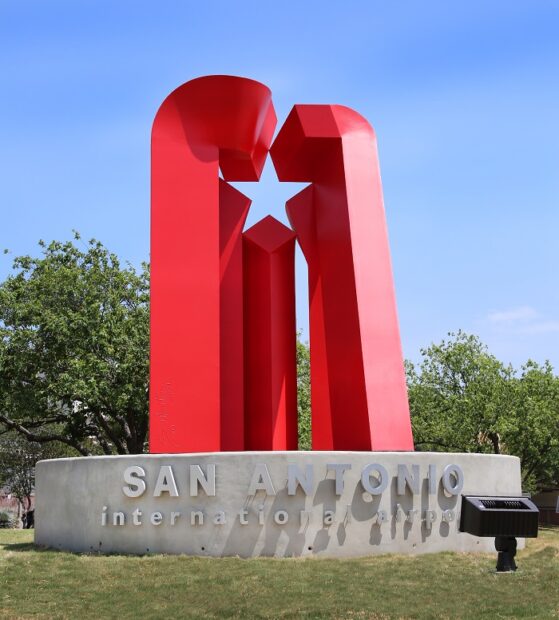 Sebastian’s “Star of Texas” in San Antonio. Photo courtesy of City of San Antonio Department of Arts and Culture

Sebastián’s (born Enrique Carbajal González) highly recognizable “gate” sculptures are planted across the globe, reaching toward the stars in glossy painted steel. In San Antonio, his newest work articulates a single star, the namesake of Texas’ state motto. The 17-foot tall metal arms curve into a five-pointed, gestalt star in a scarlet hue that lovingly adorns so much of San Antonio. This marker of the city’s role as an international place sits at an appropriate location — at the entry of the San Antonio Airport. 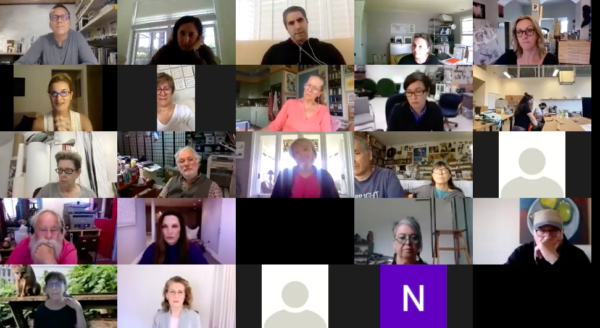 Johanna Hutchison, the Director of the International Sculpture Center, opened the floor for an online panel covering activities from the Texas Sculpture Group. TSG is an official chapter of the ISC, and is enjoying its tenth year, which will be celebrated at the San Angelo Museum of Fine Art in July.

TSG is also releasing an upcoming catalog of works from its members. Fun fact: You don’t have to live in Texas to become a member of TSG. They welcome anyone who loves sculpture. María Carolina Baulo, an art historian and writer based in Buenos Aires, spoke with Daniel Kunitz, a journalist from New York. Of trends in exhibitions, Baulo said, “Lots of exhibitions make immaterial art; people are starting to be more concerned about the message and the concept than actually keeping something material like an oil painting that lasts 500 years. They are more concerned about the message, and leaving something [more] behind than the materiality of the piece itself.”