On a frigid night on the week before Christmas, I watched Snowpiercer (2013), Bong Joon-ho’s post-apocalyptic thriller about a proletarian uprising on a massive, hierarchically organized train that circles the globe endlessly on an annual calendar. (The outside world is uninhabitable.) As the have-nots fight their way to the head of the train, where the rich enjoy themselves, they notice markers that indicate it is January, the start of the Gregorian calendar. We watch the narrative reveal the precise ecological balance in place on the locomotive, a steel arrow striking through the glacial blockages of the failed ecology outside. 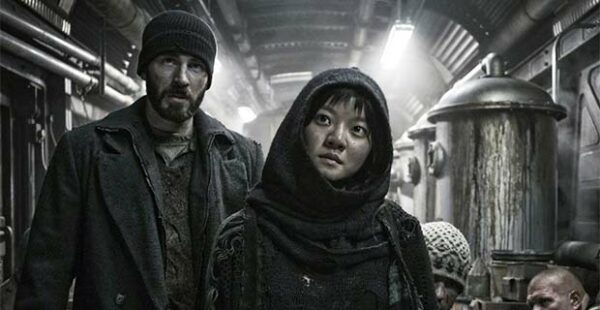 Bong Joon-ho’s celebrated Parasite (2019), for which he won Best Director at last year’s Oscars, was a similar story of the dynamic between those living in different economic realities. He was lauded for his funny, thrilling, and relatable opus depicting the struggle of millions of people trying to break through to the surface, where wealth and success seem to be effortless and casual. I found that film to be a perfect execution of how art can author history disguised as entertainment. I was ready for the world to see it, and wondered if collectively we might shift our perceptions of what we really want and need in order to move forward.

Parasite doesn’t offer solutions, but it does succinctly describe what struggle looks and feels like for so many. In Bong Joon-ho’s movie, separation of North and South Korea are repeatedly referenced as the starting point for much of this generational poverty, but for many in the U.S., the global economic crisis of 2008 was the plunge into the cold water of financial instability. For much of 2019, I heard whispers that we were due for another calamitous recession. I was braced for the day, 10 years after the last downturn, that I would wake up and read the news that markets were collapsing, and the cycle was beginning anew. I began 2020 with that concern in mind.

Instead, we got a global health crisis.

January’s promise is a vaccine to eradicate this blasted pandemic, so we can all move on with our lives in some fashion. We’re ready to exit the train and face the tundra. Art and its exhibitions will be one way we chart progress, demise, and history.

Here are some notes from the perspective of our calendar for the month of December.

After a long year of cancellations, postponements and a swift transition to online content, we have ample evidence of drastic changes in the Texas arts.

The Texas arts community, or its many discrete art communities, in their robust and varied states, consist of many non-profit organizations, cultural centers, and exhibition spaces. Those spaces are still orienting their pandemic response, which we can expect to develop through 2021. Only last month, in mid-December, the Center for Contemporary Arts in Abilene unveiled its Virtual Center, allowing for online viewing of exhibition programming. This is a reminder that the pressure on institutions and organizations to provide robust online programming will last after the pandemic is over, and will take just as long for the majority of these institutions to achieve.

At the start of the pandemic, Glasstire wanted to make sure Texas exhibitions retained an audience in spite of the shutdowns. Our Five-Minute Tours series, for which gallerists and exhibition coordinators provide video documentation of current shows, has surpassed the 200 mark, with new tours continuing to reach our inbox. What began as an earnest tryout to keep Texas art shows visible to a state of cautiously isolated art lovers (thank you, to everyone who reads the rules and takes them seriously) has proven that yes, we can continue to show and view art. Some have taken a stoic, see-for-yourself approach, like Northern-Southern’s still shots of Sterling Allen’s outdoor sculptures in Austin. The shutdowns have also allowed niche exhibitors to embrace online presentation, like Lauren Klotzman’s spoken explanation of her online show of poems and visual experiments, exhibited by Austin’s Museum of Pocket Art. At Glasstire, we continue to welcome tours, walkthroughs, and presentations of your exhibitions. Send them through.

With that, there are definitely in-person shows happening, and there are artists and events to pay attention to as we all work together to reconfigure the Texas arts infrastructure.

Desireé Vaniecia, for one, has had a notable year. After completing her tenure as a studio artist with the Cedars Union in Dallas, she opened an exhibition at Dallas’ Conduit Gallery that showcases large-scale portrait paintings, accompanied by smaller pieces that reflect tokens of significance in her family’s legacy. She works in flashe mixed with a vinyl medium for a matte application that obscures brushstrokes until closer examination. These pieces are in a decidedly limited palette — mostly blues, blacks, and earth tones. Vaniecia’s figures are portraits of significant women in her family, modeled by her cousin. And there are smaller, circular paintings in the gallery’s rear space that take on much more color and variation. Be sure to walk through the entire gallery to see what’s in store. 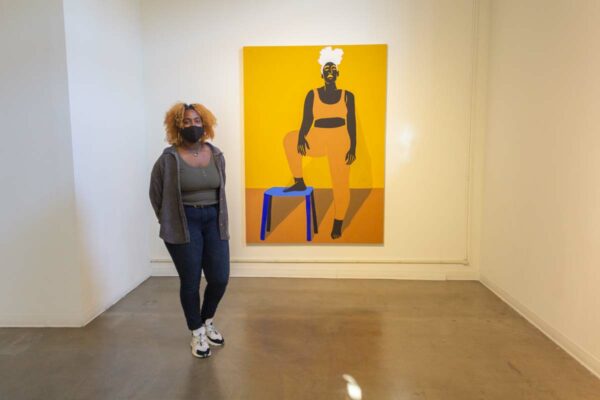 At 500X’s recently relocated space at 516 Fabrication Street in Trinity Groves in Dallas, there’s another Vaniecia portrait painting hung on the wall, defying her usual simple duotone palette for some electric interplay between orange and purple behind a nearly silhouetted figure. This show, Black Voices, is curated by Ciara Elle Bryant, another prolific artist and curator in Dallas during 2020. 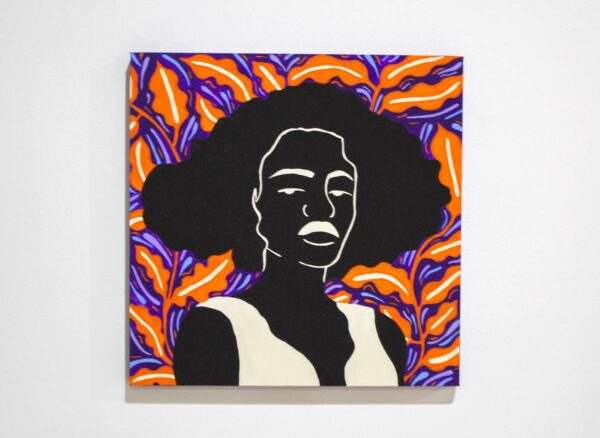 Visiting the gallery space at 516 Fabrication is a still-newish; up until recently I’ve known it as a location for artist studios. Most of the resident artists rotate out after a stint, but a select few have stuck around for years. One of the longest-running residents of the space is Evan Sheldon, an artist working in photography, collage, and heady experiments in mixed media. His work was some of the most adventurous that I viewed while walking through October’s Art Walk West, for which spaces and studios along Fabrication Street open their doors to the general public for an art crawl. Sheldon wasn’t in his studio for that event, so I scheduled some face time with him, to get a second look at the pieces he has on view in the hallway leading to his studio. His work an art framer has remained steady through the pandemic. The work coming from his studio is a sample of the the rich trove of ideas he has collected during times of plenty. 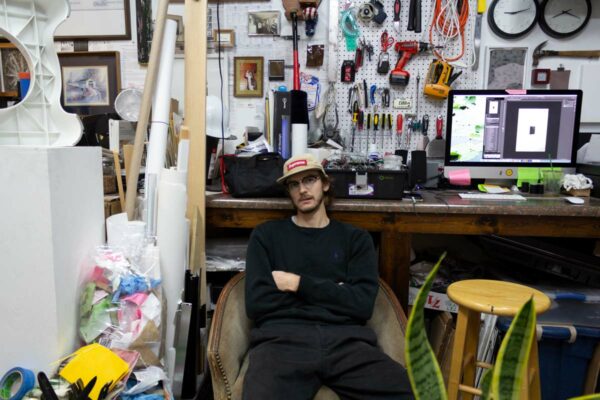 Evan Sheldon in his Dallas studio 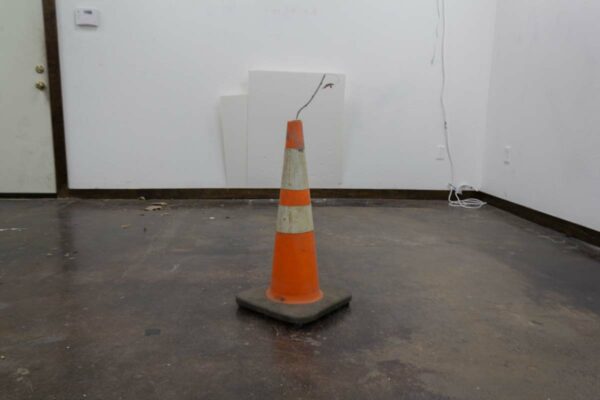 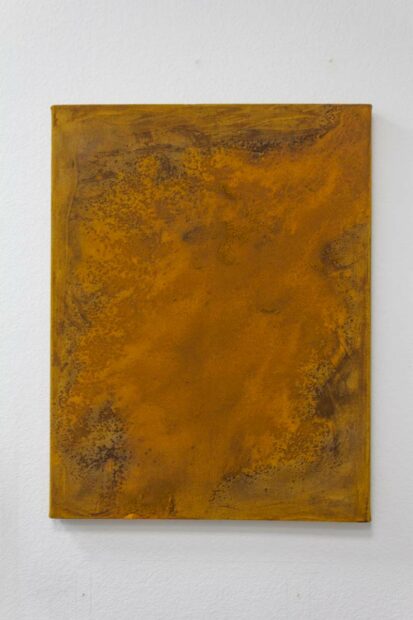