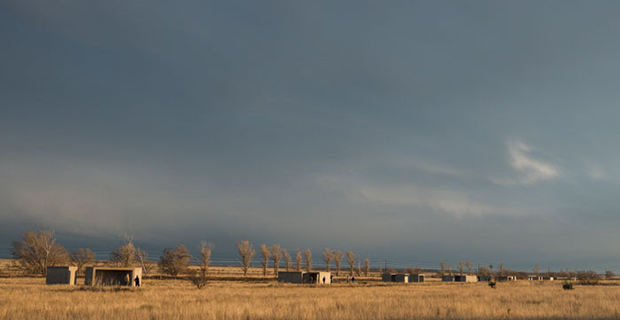 The Chinati Foundation in Marfa recently announced its 2021 resident artists, as well as residency extensions and delays for 2020 due to Covid-19. Chinati states that the Foundation has “worked closely with this year’s artists in residence to make adaptations and plans in the wake of the pandemic.”

The five new residents for 2021 are as follows (via Chinati’s announcement):

—Eric N. Mack “composes textile-based assemblages that dress their environments. Mack is drawn to the legacy of artists who have come to live and work in Marfa; he also sees Chinati as a place to ‘get a better sense of the environmental conditions my work can endure.’ Mack received his BFA from The Cooper Union and his MFA from Yale University. He participated in the 2019 Whitney Biennial and in 2017 he was the recipient of the inaugural BALTIC Artists’ Award selected by artist Lorna Simpson. Other residencies include the Rauschenberg Residency on Captiva Island, the Delfina Foundation residency in London, the Studio Museum Harlem, and Skowhegan School of Painting.“

—Jessi Reaves “activates thresholds between art and furniture — systems of design and living — that find ample traction with Donald Judd’s work in Marfa and his vision for Chinati. Her interest in how art interacts with extreme environments runs parallel with her curiosity about Marfa’s capacity to be both an international artistic hub ‘while also remaining a vast, untouched landscape.’ Reeves received a BFA from Rhode Island School of Design. She participated in the 2018 Whitney Biennial and the 57th Carnegie International.”

—Alan Ruiz “approaches research and sculpture as forms of investigation into critical and cultural techniques of framing. Doors, walls, conduit, vents become ‘architectural media’ in large-scale installations and digital designs that expose and conceal acts of social and economic construction. Ruiz received an MFA from Yale University and participated in the Whitney Independent Study Program. He was awarded a Creative Capital Grant for his ongoing project Spatial Alchemy, which will be the subject of an exhibition at The Kitchen in New York in 2021.”

—Lucy Skaer“anticipates her time at Chinati, where ‘soaking up the relations between sculpture, architecture and landscape would be a rich and productive experience.’ Skaer is a sculptor whose work slows ideas down to abstractions and makes them concrete. She once put a whale skeleton behind a partitioned wall so that it was only visible one sliver at time. Skaer received a BA from the Environmental Art Department at Glasgow School of Art. She was a 2009 Turner Prize nominee and participated in the 2018 Carnegie International. She is at work on a commission for the Thames Tideway Sculpture Park for 2024.”

—Wong Kit Yi “is drawn to Marfa in Presidio County as it borders Mexico, as well as to the ‘meteorological borders’ between the arid west and moist gulf air of this desert region’s dynamic climate. Wong makes entertaining and conceptual use of karaoke as a means of translating her art’s investigations into performative lectures and essay films with sing-along subtitles. Wong studied traditional ink painting at the Chinese University of Hong Kong; she received her MFA in sculpture at Yale University. She participated in the interdisciplinary Arctic Circle Residency program and co-chairs LASER (Leonardo Art Science Evening Rendezvous) an international program that brings together artists and scientists. Her most recent commissioned work Yes-Jet-Lag / 你好時差 is part of Art on Grid, a citywide, open-air exhibition presented by Public Art Fund.”

The Artist in Residence program at the Chinati Foundation provides an opportunity for artists from around the world to work in a striking, natural environment. Exhibitions are often held at the conclusion of the residency. These become an important part of the museum’s temporary exhibition program, and provide a vital counterpoint to the permanent collection.The Chinati Foundation provides a furnished apartment on the museum’s grounds and a studio in Marfa. Resident artists have unlimited access to Chinati’s collection and archive, and the museum staff and interns are available to assist in securing materials and preparing exhibitions. A stipend of $1,500 is provided to assist with travel and art materials.

So, 3 of 5 went to Yale. Cool.
In this time of reexamining and questioning the way power works, it’d be interesting for folks to talk more about how big name residencies like these tend to be a tight circuit that favor ultra expensive educations. I’m not sure if it’s still like this, for example, but when I lived in Houston, it seemed like the Core Program was a pipeline for alums from Columbia and especially SAIC. There also seems to be a trend towards turning the term “emerging” artist into something that encompasses people who have already had all sorts of successes (professorships in big name art schools, solo shows at institutions, etc). I’d love to know more about how these decisions get made and why they persist in this way.