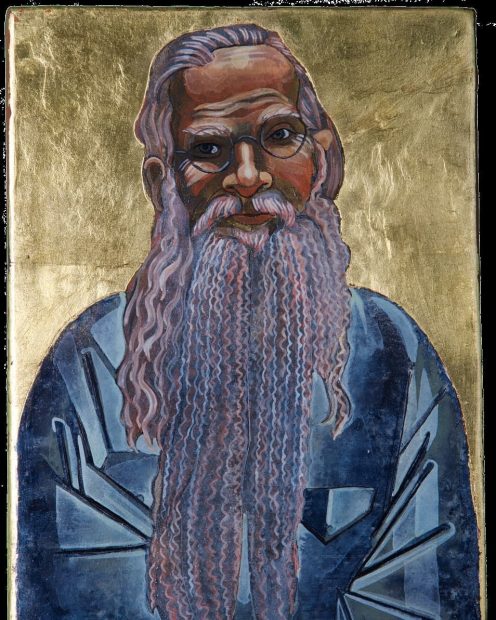 Beloved Houston-based artist Forrest Prince died on July 24, 2020, after developing an infection following a fall. The work of Prince, a deeply spiritual and political self-taught artist born in 1935, is ubiquitous throughout Houston in its institutions’ collections as well as private collections.

A Houston native, Prince began making art in his 30s, in 1969. He had already led a tough life. Houston’s Station Museum of Contemporary Art, on the occasion of a solo show of his work there in 2012, writes: “Forrest Prince is an artist who lives his life and creates his art in the spirit of Jesus. His trials in overcoming drug addiction, crime, and prison as well as his new life of self-imposed poverty and his compassionate support of people in dire need, have given him the knowledge and the inner strength to make authentically spiritual works of art.” 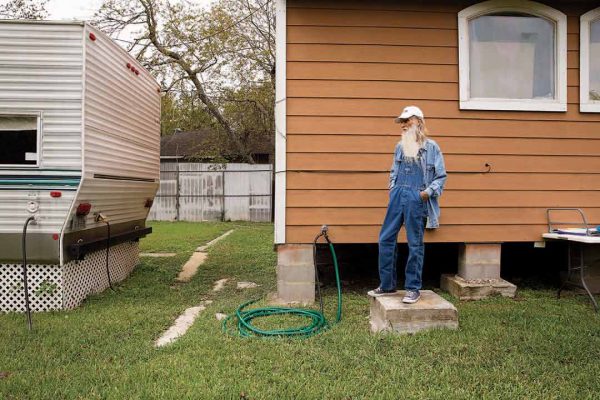 Prince lived and worked in his compound in Houston’s North Shepherd neighborhood. In 2013, after a visit with Prince, Houston art historian and writer Pete Gershon wrote, for Robert Boyd’s publication EXU#1 (2015): “He tells anyone who asks about how God saved him in 1969 after he awoke on a bathroom floor, having overdosed on amphetamines. Two years later, while on the path to recovery, he commemorated the event by painting the words, ‘Please God, Save Me’ on a seven-foot-tall, rectangular piece of wooden siding scored to resemble brick. Like a plaintive graffito scrawled by a tortured hand in a back alley, it’s a bellwether work by one of Houston’s most uncompromising contemporary artists.” 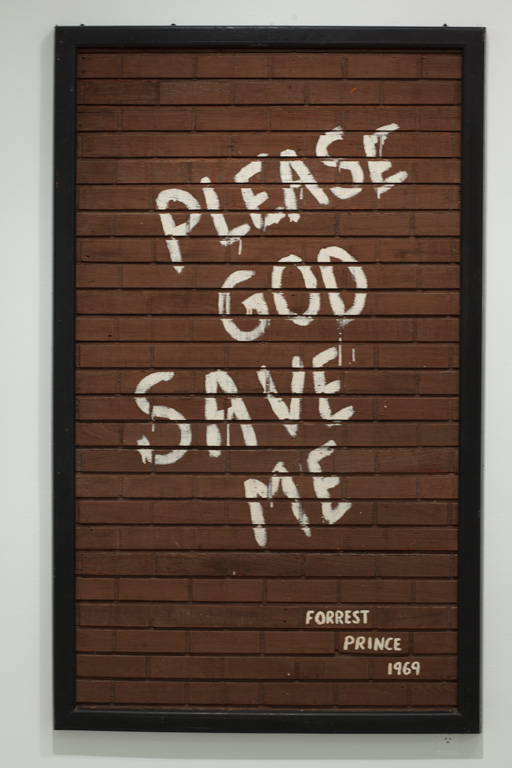 Prince recounted, to anyone who would listen, his childhood and early adulthood — pre-art —as tumultuous and tenuous. As he tells it, his mother was in a sanitarium and his father was an alcoholic, and Prince bounced around in foster care. By the age of 13 he was developing a taste for drugs and evading the police; in 1953 he joined the Marines Corps for a short and checkered stint in Korea and Japan. Upon his honorable discharge he returned to Houston and attempted to become a pimp, without much success. He battled depression and suicide attempts, and he slid into drug addiction and more crime. Then, as Gershon writes: “One morning he woke up on a bathroom floor in a pool of blood, with a hypodermic needle full of amphetamines stuck in the back of his leg. It was the point at which he finally did what he had vowed never to do: he turned to God for salvation.” And he started making art.

In 1976, when the Station Museum’s founder, James Harithas, was the director of Houston’s Contemporary Arts Museum, he gave Prince a solo exhibition, which, as Gershon writes, cemented “…Prince’s place in the hierarchy of Houston artists … [Harithas] placed him on equal footing with such top-tier Texans as John Alexander, James Surls, and Dick Wray.” He went on to exhibit at various other institutions in Houston, and his piece The Greatest of All is Love, a large, mirrored heart inscribed with the word ‘love,’ was acquired by the Menil Collection in 2005 thanks to a gift from Houston-based collector Bill Hill. 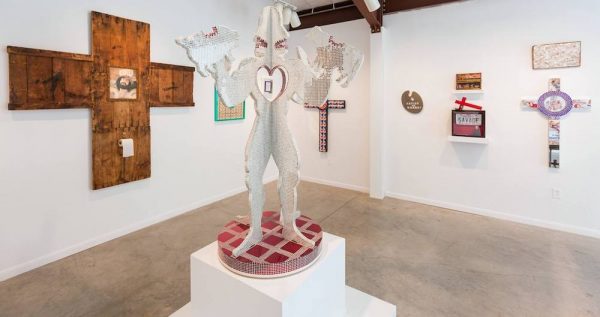 Installation view of Prince’s solo exhibition ‘The Greatest of All is Love,’ at Art League Houston, 2015 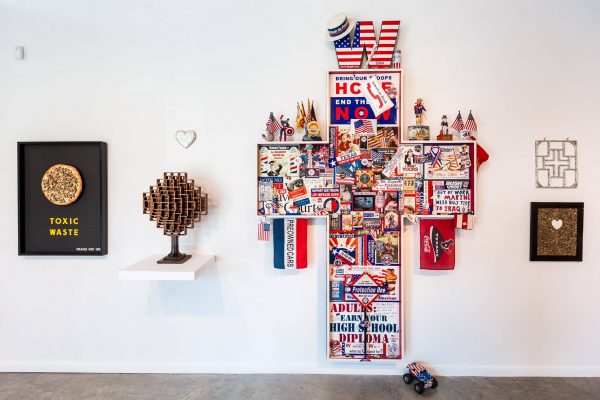 Installation view of Prince’s solo exhibition ‘The Greatest of All is Love,’ at Art League Houston, 2015

Prince was the recipient of of Art League Houston’s 2015 Lifetime Achievement Award in the Visual Arts. In an essay that accompanied the award, art historian and curator Susie Kalil stresses Prince’s lack of interest in the money, glamor, and trappings of the art world. Kalil writes: “…Forrest Prince’s work conveys an anti-commodity bias that harkens to a by-gone era when artists regarded themselves more as priests than as professionals. Like his conceptual predecessors who dematerialized objects and sometimes scattered them to the wind, Prince challenges the static, formal object.” She continues: “He uses a video cam to capture the moments and reactions of viewers; the chatter of written and spoken language to evoke time and mystical truths; base materials to vivify the space by allusions to issues and events outside the confines of the gallery.” 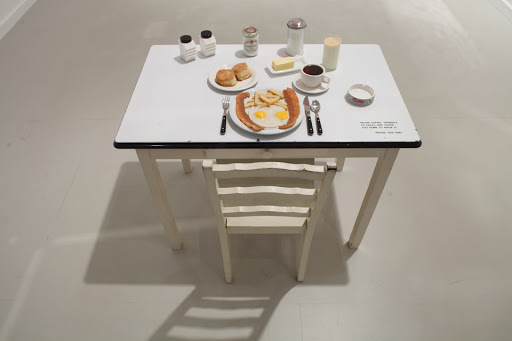 Forrest Prince, “You’re Eating Yourself to Death, and You’re Too Dumb to Know It”, 1990, table, chair, mixed media, collection of Carolyn Farb. Image via the Station Museum, Houston 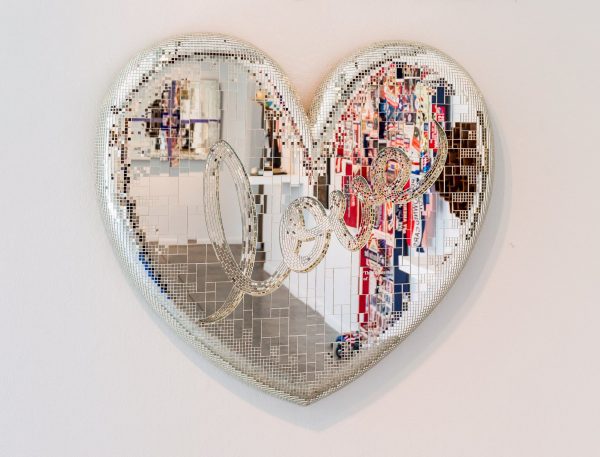 In his art, Prince never pulled any punches; he wanted his viewer to be confronted with the message — his message — about what they were seeing. Largely political, his work addressed everything from socioeconomic inequality, to the failure of institutions, to larger concepts of greed, corruption, and America’s many other shortcomings. His materials were largely found, and his works were typically assembled from disparate pieces. Particularly of note are his artworks made from mirrors — sometimes etched, often mosaicked — in which he turned his audience back onto themselves. These pieces in particular make his viewers viscerally aware of their complacency within the systems he critiqued. Though his art was never without humor, it was also biting and raw, and challenged anything that came within its crosshairs.

In an Instagram post by artist Mel Chin dated yesterday, Chin includes an excerpt he’s written for a bio for the coming publication titled Forrest Prince: If You Want to Know the Truth (by Sandra Jensen for University North Texas Press):

“I don’t believe in god but I do believe in Forrest Prince… My first reflection in a Forrest Prince work was in ‘love’, deeply embedded within a heart shape, completely encrusted with mirrored bits. Back then, my post-art-school criticality was full of high-minded opinions and I thought the shape was overused. But my judgment was fractured by the intensity of this mosaic of love and refracted into introspection by its encrustations. It was intense enough to demand a deeper look, and I mused how it could reflect the accumulated belief of an artist. I even wondered how the bits could represent my own life, pieces that needed to be mended by a force beyond myself.” 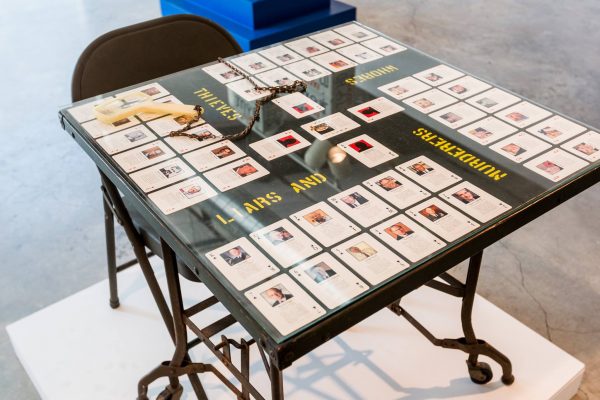 A work by Prince in his Art League Houston show, 2015 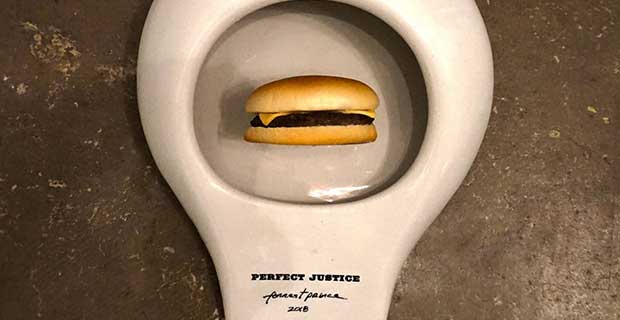 A work by Prince for his solo show ‘Awake Beloved, We’ve Slept Too Long’ at Redbud Gallery, Houston, 2018

One of the most striking things about Prince is that he practiced what he preached: he was an ardent advocate for animal rights, a strict vegetarian, and a giver of unconditional love. Though Prince would proselytize about his salvation by God if given the chance to talk about his story, he is remembered by those who knew him as an exceedingly kind and tolerant person. One of Prince’s friends remembered fondly how the artist would, on occasion, forward them emails (which often contained “a wonderful abundance of emojis”) urging them to become vegan. Prince, no matter the situation, always did what he believed was right. 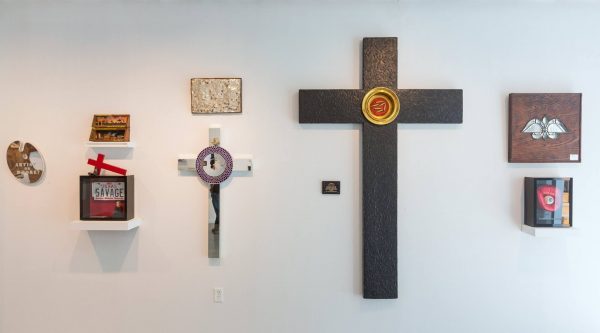 Gershon echoed these sentiments, writing that Prince “live[d] a quiet, hermetic life, having given most of his time and energy over the past three decades to servicing the poor, the sick, and the elderly in assisted care facilities. [It was] a life far removed from the one he led as a young man, when he roamed the streets of the East End and the nightclubs of Montrose as a pimp, a thief, and a drug addict.” 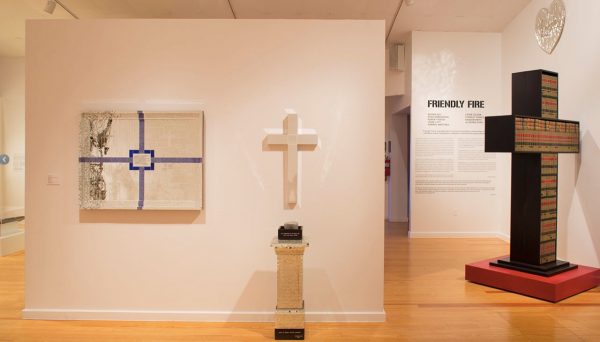 Prince work on view at the Station Museum, Houston, in 2017, for the exhibition ‘Friendly Fire’

Houston’s DiverseWorks presented a survey of Prince’s work in 1991. Caroline Huber of DiverseWorks (1985-94) wrote in the introduction to the Art League Houston’s catalog of Prince’s work: “If you have the privilege of knowing Forrest and even better, the opportunity of working with him, you will be changed. It’s impossible not to be, whether you can fully enter his world of ideas and beliefs or not. You can’t help marvel as the singularity of his vision and his whole way of being; at the seamlessness between his life and art. When DiverseWorks presented the first survey of Forrest’s work in 1991, it also had a globe shaped mound of trash at the entry and a garden growing watermelon and flowers as you left the exhibition. Forrest’s concern for the welfare of the planet and every creature that inhabits it has led him to have a diet like no one else, a spiritual path like no one else and an energy like no one else. He even smells sweeter than anyone else from all those carrots and avocados he lives on.”

We will update this post with information on services or celebrations as we receive it.

Not knowing Forrest Prince personally now leaves me feeling empty. I know I shook his hand once at at exhibition and play that memory over in my mind, attempting to gain some channel, some connection, to his powerful images. I especially would like to dedicate a piece of my own work called “Where I AM”, an etched mirror piece influenced by Forrest Prince, currently on exhibit at Archway Gallery.
Thank you Mel Chin for your words, introspection, insight and love.

Thank you for the wonderful retrospective on the life and work of this legendary Houston heart. He was a dear friend and his spirit and fierce gentleness poured out into everything he did and everyone he met. It was a blessing to have him in our lives and our hearts are saddened by this loss. We loved him deeply.

I was honored to stand shoulder to shoulder with this truly good and unselfish man protesting animal cruelty at the Houston Rodeo and outside Neiman Marcus too.. His show was the best ever at Station Museum, if you ask me! His artwork so explicitly confronted man’s inhumanity to our animal friends, and the deeply radical message of kindness at the heart of Christ’s philosophy that many other Christians- but not Forrest!- get a little mixed up on. I have to admit I was always a little jealous/impressed that he found a way to communicate to people with his art in a way that really got across! I was just an acquaintance and did not know him well, though we texted from time to time ever since he appeared on KPFT’s Vegan World Radio as a guest a few years ago. I’m saddened because I feel like this is another light going out in the dimming constellation of Houston’s interesting and truly good people… He told me on June 27th that he had overcome a bout of Covid, but broke his leg while feeding birds. So he died from an act of kindness for the animals, the least fortunate among us of all. If I may speak for the animal rights community, I hope this expresses the deepest possible respect for our fellow Earthling, Forrest Prince. Where he falls may many more like him spring forth. ………………………. We’ll be dedicating tomorrow night’s episode of Vegan World Radio (Monday, 7pm) by rebroadcasting the 2016 interview Forrest did with the show.