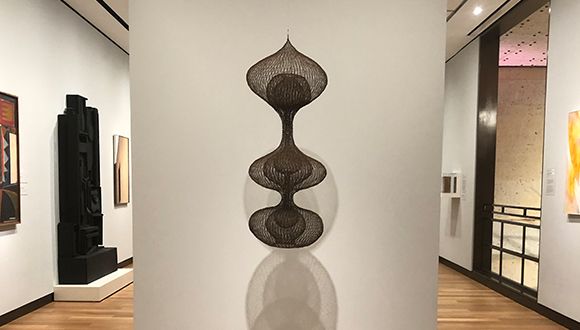 Ruth Asawa’s Untitled (S.453, Hanging Three-Lobed, Three-Layered Continuous Form within a Form) (ca. 1957-59) has been acquired by the Amon Carter Museum of American Art in Fort Worth. It has been on view at the museum since late October. The announcement today of the landmark acquisition establishes the Carter as the only institution in the country to have this type of Asawa’s work in its collection.

The looped-wire sculpture, in a style Asawa is most recognized for, is a unique example of her continuous “form-within-a-form” hanging sculpture, and represents the first major three-dimensional work by a West Coast artist to enter the Carter’s collection, which also includes more than fifty lithographs created by Asawa at the Tamarind Lithography Workshop (New Mexico).

Untitled (S.453) was created for Asawa’s brother George, who took care of the siblings’ aging parents. The sculpture is a rare example of the artist’s work in that it is composed from a single line of intricately hand-looped iron wire, which creates three interior lobes and adds two subsequent layers. Via the Amon Carter: “The continuous line from the interior form of the bottom lobe to its completion at the outer layer of the top lobe is the only three-lobed, three- layered continuous form-within-a-form sculpture that the artist made from one wire.” 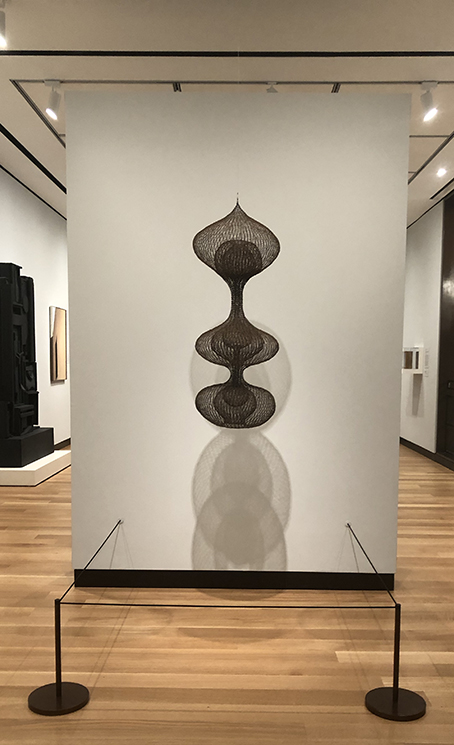 States the Amon Carter’s Executive Director Andrew J. Walker: “The addition of this remarkable work by the celebrated American artist Ruth Asawa exemplifies the museum’s collecting commitment to acquire work of the highest quality that represents important periods throughout the history of American art.”

Widely considered among the most significant artists of the mid-20th century, Asawa studied with artist Josef Albers at Black Mountain College in North Carolina, where she began experimenting with her forms.

A lecture with artists Amber Bailey and Carmen Menza on Thursday, March 26 at the Amon Carter will focus on Asawa, her contribution to sculpture, and the museum’s acquisition. Tickets and details are available here.

Untitled (S.453) is on view in the Carter’s 20th-century collection galleries, which are included in the museum’s free admission.

For more on Asawa and the Amon Carter Museum of American Art, please visit the museum’s website here.

Ruth Asawa was born in Norwalk, California, in 1926. She expressed interest in art from an early age. In 1942, her family was interned at the Santa Anita racetrack in Arcadia, California, where she learned drawing techniques from Walt Disney Studio illustrators also interned at the camp. After six months, they were sent to an internment camp in Rowher, Arkansas, and later attended Milwaukee State Teachers College (now the University of Wisconsin at Milwaukee). She subsequently  enrolled at the Escuela de Pintura y Escultura, meeting Clara Porset, a teacher there, who encouraged her to apply to Black Mountain College in North Carolina to study under Josef Albers. Since the mid-1950s, Asawa’s work has been widely exhibited and collected by institutions including the San Francisco Museum of Modern Art; M.H. de Young Museum, San Francisco; Amon Carter Museum of American Art; Crystal Bridges Museum of American Art; Los Angeles County Museum of Art; Solomon R. Guggenheim Museum, New York; Whitney Museum of American Art; and the Museum of Modern Art, New York.