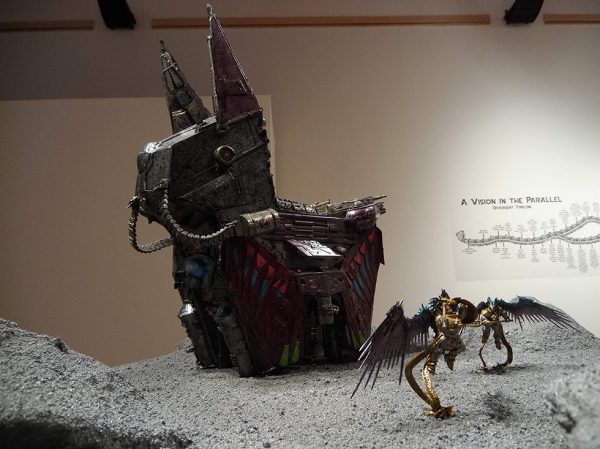 When you first enter The Uncolonized: Visions in the Parallel at The Franklin G. Smith Gallery at Chamizal National Memorial in El Paso, you’re greeted by a video screen set atop a lunar-rover stand. The video itself is a documentary of sorts, laying out the beginnings and rise of Mesoamerican technologies, set to the tune of Cumbia-techno-flute music. The style of the animated video is flattened into sections, like a topographical map, with layers of images merging in and out of focus: computer grids, a rising sun, two Mesoamerican men conversing, and images of Maya codices. This introductory mash-up is required reading for the rest of artist and UTEP sculpture professor Angel Cabrales’ exhibition. 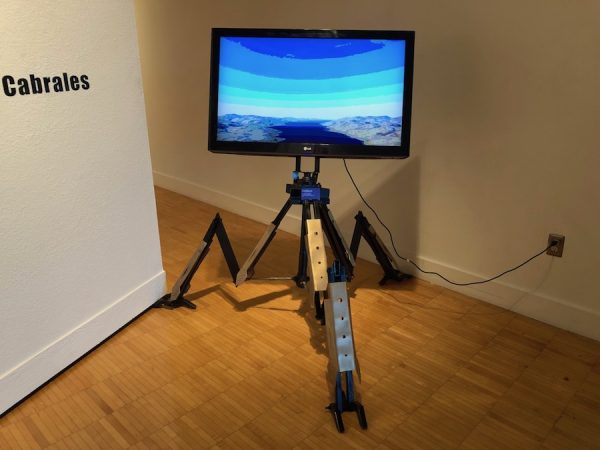 Angel Cabrales, A Vision in the Parallel/Un Vision En Paralelo (Video with music by Henry Van) 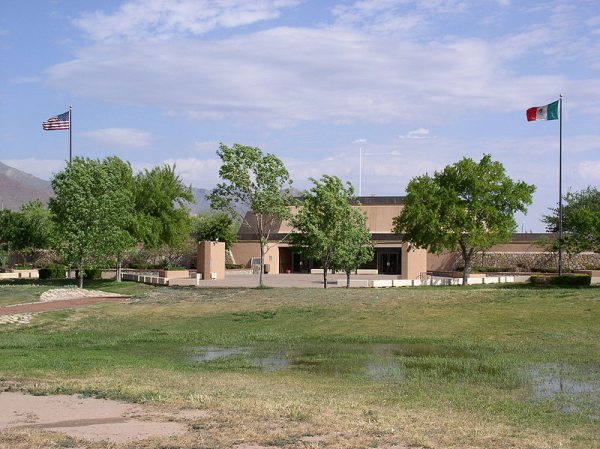 But the exhibition’s venue had already set the tone for me. Chamizal National Memorial and Peace Park is land that was disputed, until JFK was president and the issue was met with a peaceful resolution and land appropriation. The Chamizal Park is split between El Paso and Juarez, Mexico, with a large border fence and freeway enhancing the divide. The memorial itself is a nice reminder that leaders can behave amicably and work toward peaceful resolution, but the adjacent border wall is a more sinister reminder of current feverish politics and national rhetoric regarding immigration and nationalism. The setting of The Uncolonized precedes us by a few centuries, but the discourse doesn’t seem too distant. 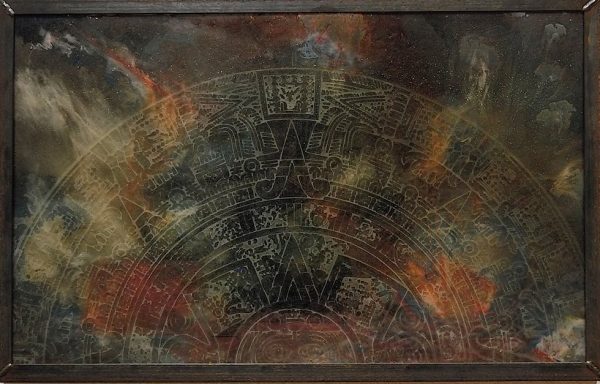 The works you encounter after the video are nine laser-etched lighted panels. In these, Cabrales includes many references to the Aztec calendar, similar to the Mayan calendar of 365 days, but with a concurrent ritual calendar of 260 days (which is, by the way, close to the human gestation period). Quetzalcoatl (a Toltec, pre-Aztec god, the feathered serpent) also appears in these and throughout the rest of the exhibition, often as an ouroboros. Everything seems to be a double entendre — a nod to the complex and cyclical multiple meanings in Mesoamerican symbolism. Cabrales infuses each piece with both material and figurative layers. 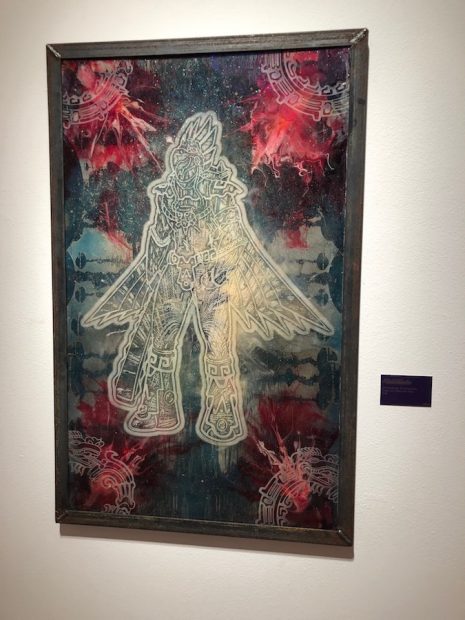 Cabrales “kitbashed” model kits to create his Tanquekaklan and interstellar llama piñata, with other heavy nods to sci-fi and pop culture. (Also, his llama eerily resembles the llama piñata from Fortnite.) This piece is fun and nerdy, with pink and purple patina metallic paint, winged figures (The Aztechnonauts), and action-hero depictions of technological geniuses such as “Zapotecknical Engineers” and “Olmechemists.” Other pieces in the exhibition are action figures, and this element of play permeates much of Cabrales’ work. In this way, the show functions like the recent superhero hit Black Panther, allowing people (maybe especially young people) to see themselves represented in a positions of power, free from the effects of colonialism. 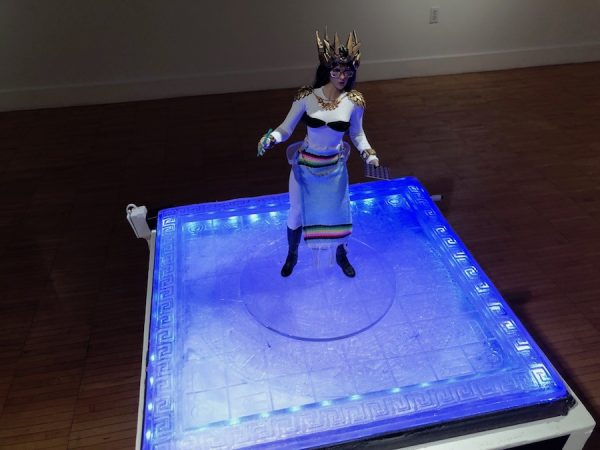 There is also nostalgia here, but in the sense of a miscarriage — something that didn’t fully come to fruition, cut short in which the pain and loss is still very, very real. Along one wall of the gallery there is a two-part timeline (eerily similar to the double-headed serpent, which, like many Mesoamerican artifacts, resides in a Western museum. See Continued Colonialism Problems, page 1492). The two-headed Quetzalcoatl begins in pre-Columbian Olmec history, and the top head follows a timeline of pre- and post-Columbian American history as it happened, with the rise and fall of the Aztec empire, genocide and continued upheaval. The timeline underneath contains Cabrales’s fantasy, and follows closely the world events and wars; at first glance it was difficult to distinguish the two. I found myself thinking: “What is the United Nations of Anahuac?” But around the WWII mark, I caught the sure discrepancies and saw the timeline as a multiverse wish. This reverence for what might have been is tangible throughout The Uncolonized. 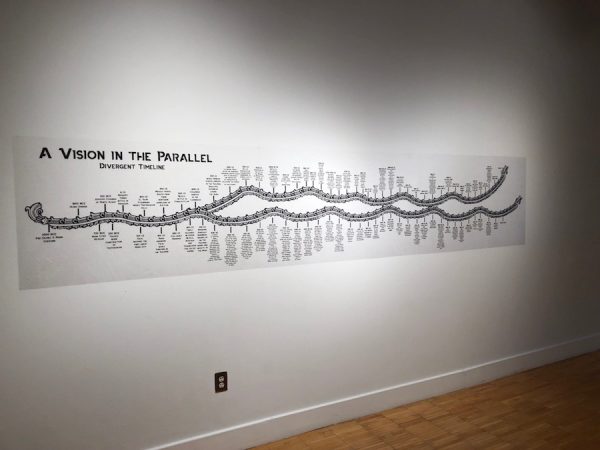 And what was! The real technologies Cabrales alludes to were astounding, so much so that certain folks think aliens must have given Mesoamericans advanced technologies (and conspiracy theory bros with bad haircuts are hocking those views on the History Channel). But seriously, let’s break down some of technologies developed in pre-Columbian America: numerical and astrological calendrical systems; the quipu (a series of knotted strings that the Inca used to record censuses, military organization, even tax obligations — they read very much like binary coding); agricultural and irrigation advances; pyramids; roads, and rubber. All of this centuries before Euro-civilizations caught up. 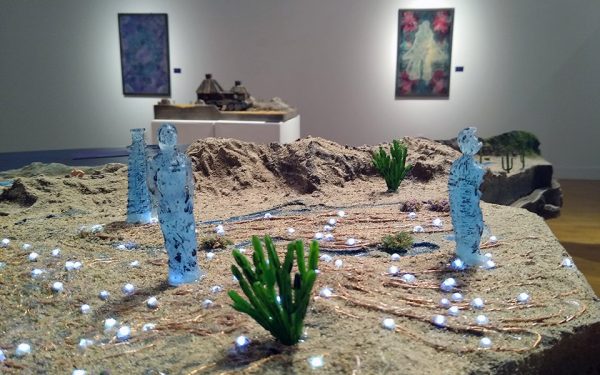 Much of the work in the show is rife with a dark humor and science-fiction references (a movie poster, presented by “ChupaCabrales” which is Cabrales’ signature and metal-works stamp that carries the word play of Chupacabra and what essentially translates to “blow me”). Along with the sci-fi references, there’s a sharp military edge to the work: the Trojan horse, conquerors, wars, strategies, and maps abound. Cabrales grew up in El Paso, a place with continual Border Patrol presence and walls, and his father was a White Sands Missile Range engineer. Cabrales’ work in the 2017 Texas Biennial was a playground surrounded by prison-system fencing and lighting, referencing the continual surveillance of the border, family separations, and systems that are stacked against the Other. While his personal history is present in the weapons technology work in The Uncolonized, there’s also an acknowledgement that pre-Columbian Mesoamerica wasn’t absent from violence — but that perhaps, the value systems and nuance in their technological designs speak to an advanced nuance in worldview. I’m not talking The Crying Indian Keep America Beautiful campaign or any other media trope of indigenous folks (screw you, Aldous Huxley), but maybe a basic respect for the planet that keeps us alive. Cabrales’ non-binary, layered approach is a breath of fresh air. The hard part is, nuance or not, we can’t really know what the pre-Columbian way of thinking would be.( Last week on these pages, Dr. Ruben Cordova illustrates just how deep and far back the reach of colonialism goes.) 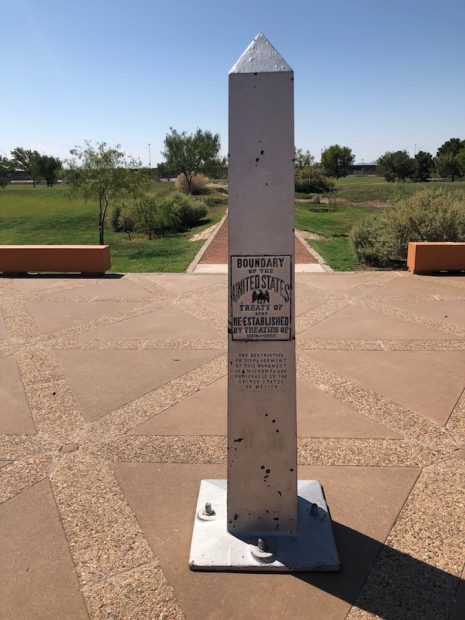 The impact of art exhibitions can’t be delivered or communicated in a meme or a sound bite, but there are components of Cabrales’ work that deliver meaning in the same quick and biting manner. But spending time with his work delivers further reward — I could have spent all day in this show. The work is a shot in the arm; I left filled with excitement, bursting at the seams with tangential ideas and loads of questions. And a feeling of dread: whose voice is telling these stories, trying to answer the questions of what was lost? Descendants of Inca, Maya, and Aztec peoples are all around us. The most important question then, is: what could have been? To take only enthusiasm, nostalgia, and joy from this work would be in the same spirit as taking selfies at any Holocaust memorial. To be clear, Cabrales’ work overflows with humor, but as a counter to really difficult truths, just as great comedy tends to do.

On view through January 16, 2020 at Chamizal National Memorial and Peace Park, El Paso.