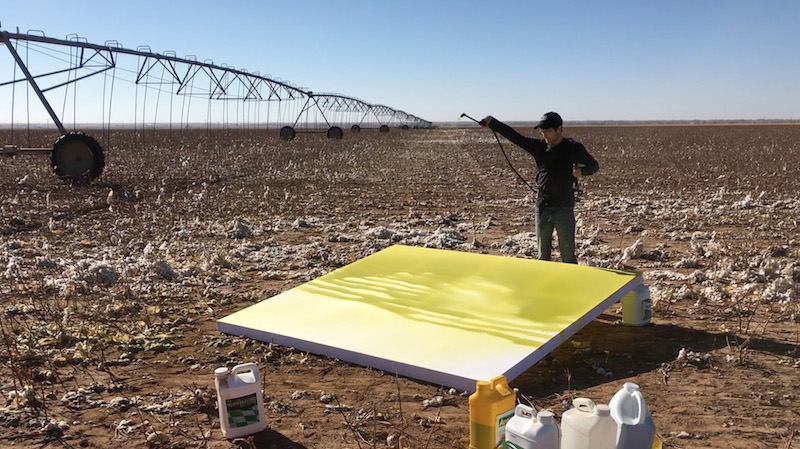 The “native” vegetation of the South Plains seems primarily to consist of pricklies, stickers, and pokeys: plants that grab you, stab you, and don’t let go. These tough weeds evolved to cling virulently to passing ruminants and spread like crazy, but they’re a torment for humans, our clothes and tender bare skin. I’m convinced that goatheads, for instance, are tiny manifestations of pure evil.

While traveling through California in 1919, the barb of the cholla inspired London-born author and photographer J. Smeaton Chase to denounce the cactus with this memorable quip: “If the plant bears any helpful or even innocent part in the scheme of things on this planet, I should be glad to hear of it.” If he’d paused to observe the cactus in more detail, he might have noticed the desert rats and birds that take refuge in the cholla’s spiny fortress. Chase’s quote exemplifies a Western attitude about plants, and about nature in general, that frames them as either antagonistic or beneficent. Plants are categorized as “helpful,” “useful,” “beautiful,” “rare,” etc., or, if they are none of those things, they’re just “weeds.” People have cultivated or eradicated plants according to their place on that spectrum — culinary, medicinal, or aesthetic. With the advent of capitalism came the “cash crop”: plants as commodities.

Humans have inadvertently tracked seeds and spores around on their boots, and spread noxious weeds to different continents on boats. They’ve chopped down diverse forests to plant vast fields of one single crop. All of these levels of human intervention have had the effect of diminishing the diversity of species on the planet, and contributing to the next “great extinction” powered by human activity. 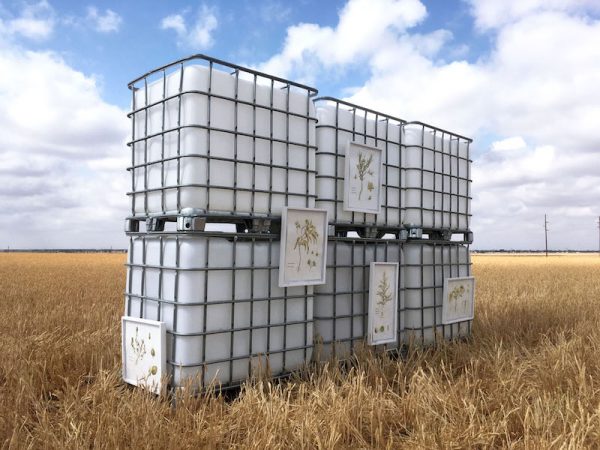 Artist J Eric Simpson grew up in the midst of a monoculture, on a farm just outside of Lubbock, Texas, growing cotton and corn. After attending grad school at the University at Buffalo, New York, Simpson — an alumnus of the Land Arts of the American West program at Texas Tech — made his way back to the family farm, where he currently “daylights.” In his art, he deploys the materials and tools of industrial agriculture to critique the “current mode of crop production that implements an anthropocentric agency over the land.”

Simpson’s work combines the keen eye of a naturalist, the sharp mind of a researcher, the activist impulse of social practice, and the immersive monumentality of installation art. In a recent series of performative paintings, all entitled A Painting for Monsanto, Simpson set up canvases out on the vast, flat cotton fields of the farm (pictured at top), mixed various herbicides and pesticides, and proceeded to use an industrial sprayer to apply the “paint.” The result is monochromatic paintings in a yellow that’s somehow simultaneously sickly and vivid.

As luck would have it, my yard got sprayed the very day I went to visit Simpson at his studio. I asked the college boy who came unannounced to dispense the herbicide what was in the stuff he was spraying. Some kind of general broad-leaf weed killer, he mumbled. It made my goatheads shrivel up and turn brown. But their cruel spikes were still left in the dirt. The whole exercise seemed utterly pointless to me.

“The true product is the weed,” Simpson pointed out, describing the cyclical nature of the relationship between herbicide-resistant, genetically modified cottonseeds and the “superweeds” that develop resistance to the herbicides. Of course, both the cottonseeds and the herbicides are the intellectual property of the multinational agro-chemical companies that sell them to the farmer. 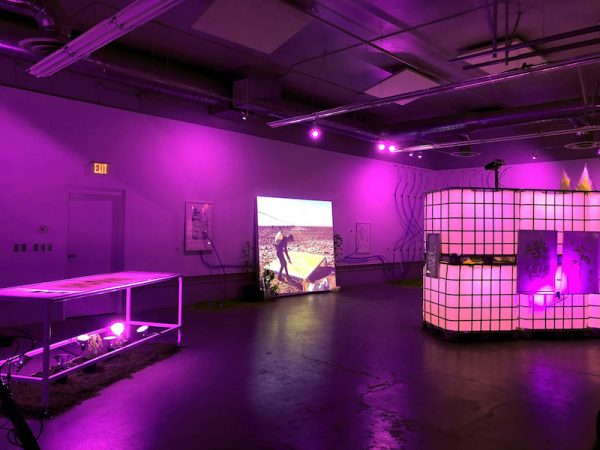 That evening, Simpson’s studio, which is in one of the live-work spaces in the Charles Adams Studio Project (CASP) in Lubbock, was still set up with the installation he showed at the First Friday Art Trail the weekend before. Each sculpture was grounded by a little patch of dirt. A pump that was hooked up to a length of clear plastic tubing sent a blue liquid from an herbicide container into one of Simpson’s paintings, a naturalistic rendition of a generic bottle of Roundup, painted using Monsanto’s genetically modified cottonseed as paint medium. The room was suffused with a pink glow, courtesy of greenhouse UV grow lamps. 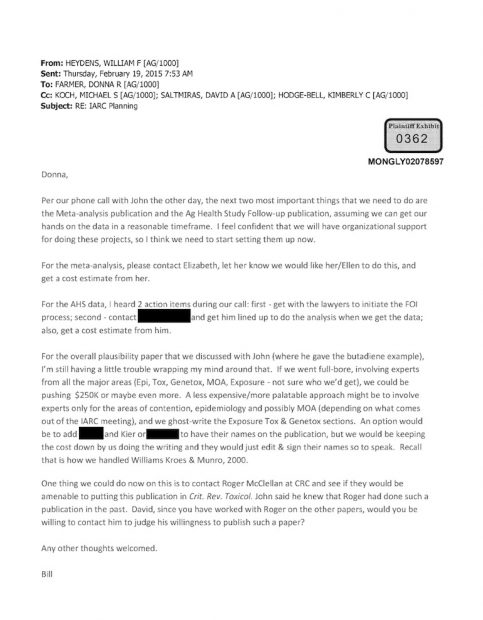 There was a shelf displaying several pages of heavily redacted emails, drawn from the highly publicized trial that ordered Monsanto to pay a California groundskeeper $289 million for his cancer caused by repeated exposure to Roundup. The emails demonstrate that Monsanto was well aware of the carcinogenic effects of glyphosate, a chemical used in their herbicidal products. They tried to cover up the facts by ghostwriting sections in scientific papers, a fact that seems to also implicate researchers who would be willing to “edit and sign off” on sections essentially written by Monsanto. During First Friday, I watched as Lubbock locals filed past the emails, and nearly every person responded to the exhibit. This is something they relate to. 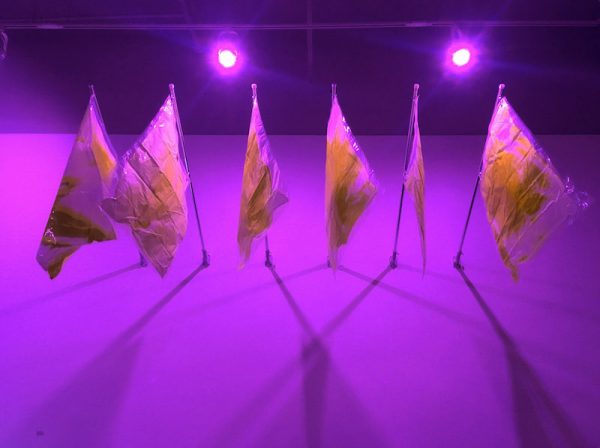 “There were only four agro-chemical companies controlling 91% of all cottonseed sales in the U.S.,” Simpson told me. “And it’s even less than that now, because they’re all merging with each other.” The German multinational firm Bayer acquired Monsanto earlier this year, while Dow and Dupont merged in 2017. Even without the mergers, these corporations are intricately intermixed due to cross-licensing agreements of genetic traits between them, which creates an oligopoly or cartel-like system. These mega-companies hold extraordinary, pervasive power over this region. “So, in a way,” Simpson says, “the strain is put on the farmer who becomes a bystander to all the ‘big decisions’ happening in the world of bio-technology. The power [that farmers] once had, a diverse market from which to buy products from for instance, is all but depleted. For instance, try to find a local dealer for non-GMO cottonseed. I assure you it is very difficult to do.” He picked up a transgenic cottonseed from where a pile of them were scattered on a video monitor. It was bright and unnaturally blue: about the same color, size, and shape as a blueberry-flavored Jelly Belly. I thought fleetingly about the proprietary blue meth from Breaking Bad. 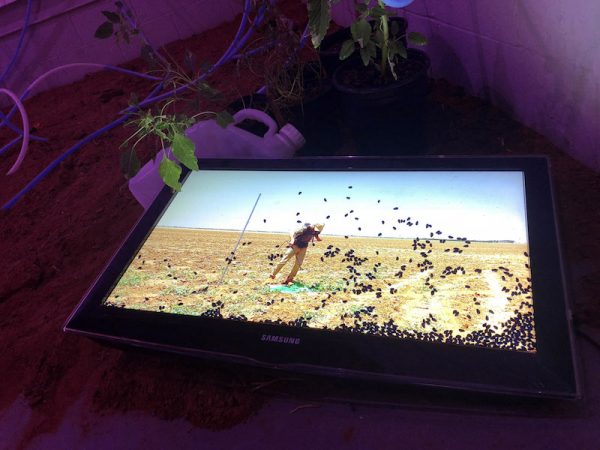 As pointed out in an earlier Glasstire review of Simpson’s work, using a piece of heavily protected intellectual property in an artwork is pretty gutsy. Though it is extremely unlikely Monsanto (now Bayer) would pursue a lawsuit against an artist who used a scattering of seeds in an installation, the implication is present. (More troubling is the work by Simpson’s collaborator in the exhibition reviewed, Caleb Lightfoot, who made a video of himself in a Bayer greenhouse while an employee of the company.) In a town that is essentially run by Big Ag and the scientific research institutions that enable it, that’s no trivial matter. 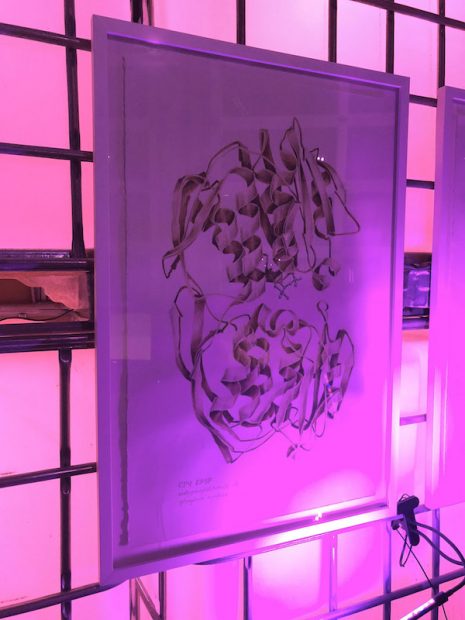 Simpson clearly doesn’t kowtow to the powers that be in Lubbock, but he isn’t an antagonist, either. He mindfully emphasizes that he’s not against the farmer, or the scientists, or even against the corporations. “I know personally some people who work for these companies,” he said. “From my experience, these people are not gaining any personal power over the farmer. Nor do they want the farmer to fail. In fact, just the opposite. They are doing intense research to help the farmer succeed.” 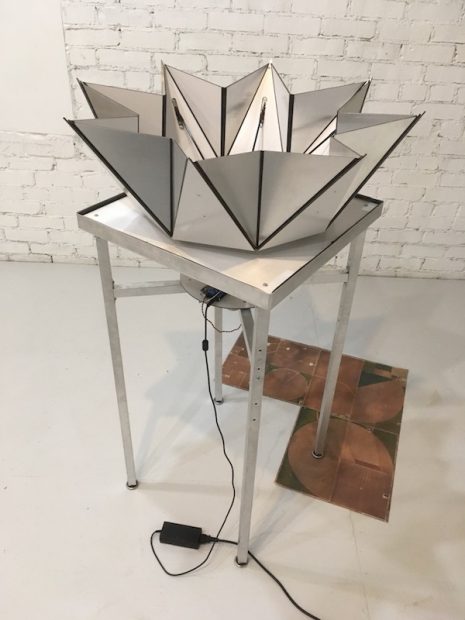 So what does he see as the future for the farm? “Realistically, we can’t go back to a time of agrarian subsistence-level farming,” he says. But we urgently need to invest in devising and developing sustainable practices. He has faith that science will help us reach that point, and that art can help us envision it. Simpson has been working on a sculpture that would collect rainwater and solar energy, with an origami-like shape that opens up to receive rain, and closes to collect and store sunlight, distributing the water as needed through a root system. “The idea is that the sculpture would function as a ‘mother plant’ to surrounding vegetation,” he says. 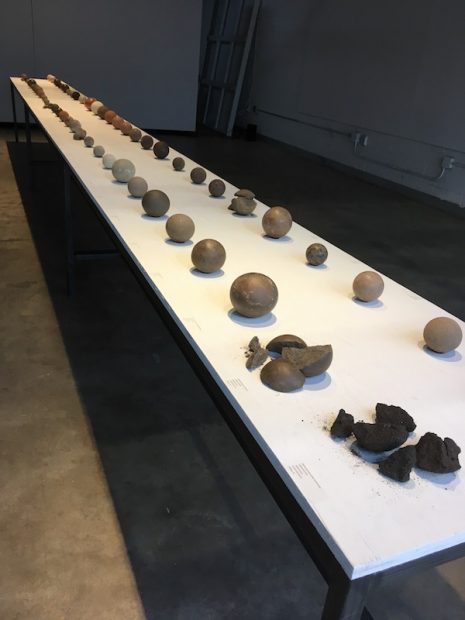 As a CASP resident, Simpson has been extending his efforts out into the community, through curated exhibitions and talks. His curatorial endeavors so far have been outstanding. Each exhibition in the series takes one of the “four vital resources of Lubbock”—earth, wind, sun, water—as its theme. For “earth,” sculptor and ceramicist Nicolle LaMere exhibited her “dorodango” collection—perfect shiny spheres of dirt. And last month, Ryder Richards showed his phenomenal installation Empowerment, for “wind.” I’m eagerly anticipating the “sun” exhibition, opening February 1, which will have “art objects, modular solar panel kits, and floating habitat workspaces.”

With an art studio as interdisciplinary research space, Simpson creates a fruitful dynamic between the fields of art and agriculture. Because CASP studios must engage with First Friday crowds — and these crowds are diverse, not just “art folks” — they serve a public function in Lubbock, and, one would hope, can strengthen different communities through mutual understanding. Simpson wants to create an “actual dialogue” with viewers, real conversations “on topics that impact their local economies and ecologies.” “During First Friday events,” he says, “I’ve been able to meet biologists, engineers, weed scientists, farmers, bankers, you name it, all of whom are able to engage with an aspect of the work, as it was rooted in this place.” The work is “about Lubbock, for Lubbock — it’s hyper-local in that sense,” he continues, but it can be shown elsewhere. Monoculture impacts landscapes all over the world and its effects have serious consequences for the diversity and sustainability of life on this planet.

As research continues to pour in showing that our planet is under threat, that human-driven climate change will have even further-reaching effects than we’ve previously imagined, touching every level of life (even the bugs are disappearing, for God’s sake!), it becomes apparent that we, humans, are the mammalian version of weeds. We’ve spread to every corner of the planet, and wherever we are we choke out other species. We should be looking at the weeds to understand more about who we are.

The landscape here is deceptively simple. It is flat, dry, dusty, with cotton as far as you can see. But Simpson’s work identifies it as a complicated system, with far-reaching effects. The dialogue he’s opening up in this corner of Texas, while clearly addressing the lives and livelihoods of locals, concerns itself with the ways we treat landscape and agriculture and how that will affect the world and our future. There are important lessons in it for all of us.

Bayer’s role as a critical player in the Holocaust precedes its “contributions” to U.S. agribusiness. Their advancement of drug regimens and applications with serious side effects for humans and the environment extend way beyond their involvement in the South Plains and includes an impressive list of devastating but profitable products. See, for example: http://www.i-lawsuit.com/the-dark-history-of-bayer-drugs/