Lubbock City Eternal opened at the Charles Adams Studio Projects (CASP) 5&J Gallery in Lubbock this month. CASP resident Eric Simpson daylights on his family farm, and his collaborator is designer Caleb Lightfoot. The exhibit is best seen at night, when the impact of the unsettling purple glow-lamps that light the show is most intense.

The artists vigorously critique corporate farming and dominionism, the Old Testament ideology that man is above all of the rest of nature. Many of Simpson’s past works and performances have used Christian iconography and displays of quiet rituals of endurance. 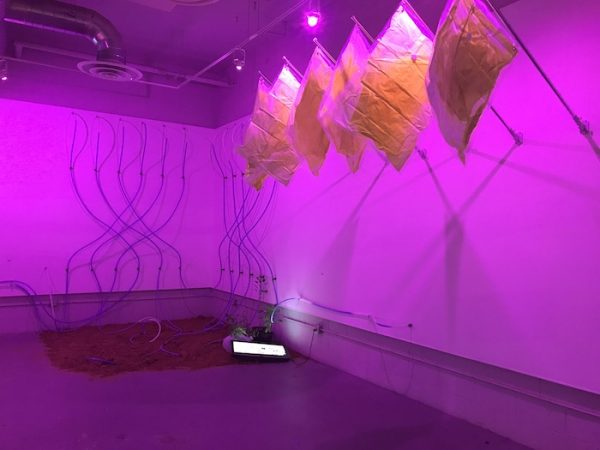 Simpson and Lightfoot get into creationist commentary, especially as it applies to genetically engineered organisms. The plot twist is that the critique is less about humans exercising control of their environment, and more about the repercussions of chemical resistance that follows monoculture. Hence, the show title alludes to the fall of the Roman Empire. (Not the mention that the Ogallala Aquifer is all but dried up.) It takes guts to mount a show critiquing the very economy that sponsors your gallery space. (Lubbock is the largest area of cotton production in the United States.) 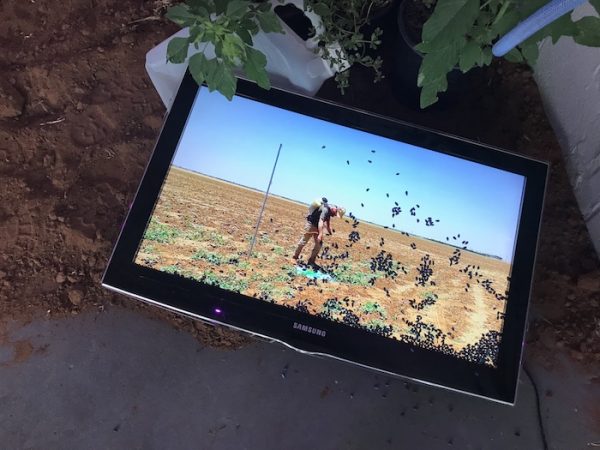 Both artists took major personal risks in this exhibition — of the legally questionable kind. Which is cool! But in all seriousness, they could be sued for three of the works in particular. I’d rather not contribute to someone’s financial ruin by writing this, but this is absolutely one of the strongest aspects of the show. By that, I mean, Lubbock City Eternal dives deeply into ideas of ownership. Ownership of an organism, and that of intellectual property. 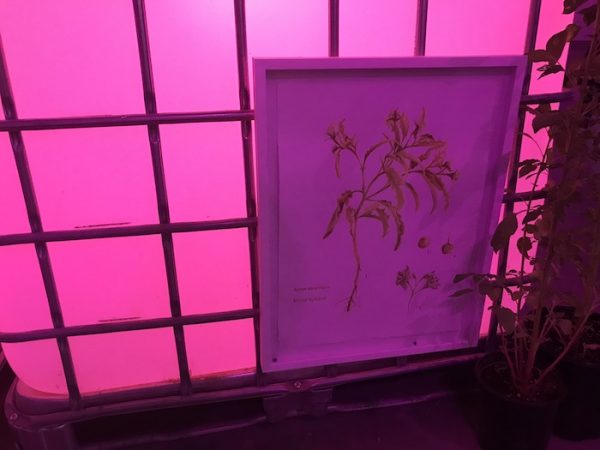 Simpson has two pieces that put his neck out there: a sprinkling of Monsanto seeds on a video monitor (you are not allowed to store these seeds year to year), and drawings made using the seeds, displayed throughout the gallery. Monsanto’s fanatic patents over seeds allow for even its website to have a section on why the corporation sues people… . Don’t worry, it’s to promote innovation. These artists go so far as to hint at the plants’ autonomy in all of this; resistant weeds (some edible and useful) that proliferate West Texas cotton fields are memorialized through drawing and potted throughout the border of the gallery. The philosopher and speaker Dr. Wayne Dyer says it best: “The difference between a weed and a flower is judgement.” 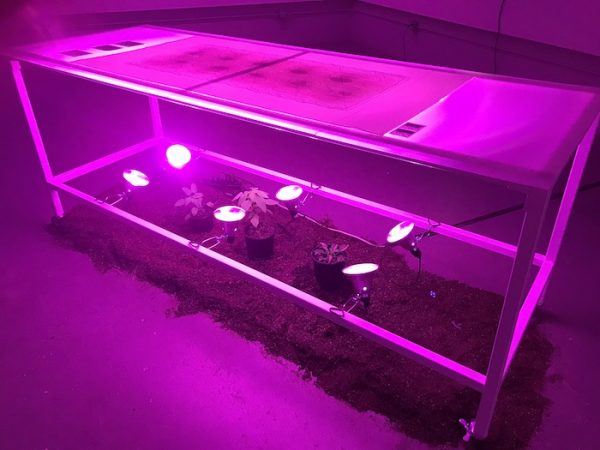 Simpson’s family farm is working on a way to allow weeds to cohabitate with crops, so the farmers don’t have to continue to battle them. (The weeds always win, as Simpson’s seed-drawing Enemy of the State will show you. It’s a list of different chemicals that were produced to combat the ever-evolving and responsive weed.) Plants talk to each other, really. They send out chemicals, and can even make noise, to adapt to threats or send out warnings. Very Avatar, sure, but to really consider human activity thrust upon the world at the underbrush level is a bit of a (guilt) trip. The promising thing about Lubbock City Eternal is that there are artist/prophets who are unafraid to challenge the big dogs in real and personal ways. And that there are farmers who are innovating, legally, even when monoculture is the reigning business model that squelches small farms’ efforts before they take root.

‘Lubbock City Eternal’ is on view at The Charles Adams Studio Projects’s 5&J Gallery in Lubbock, by appointment until the end of August.