Barack, Michelle, and Artists Teach How to Look at a Painting 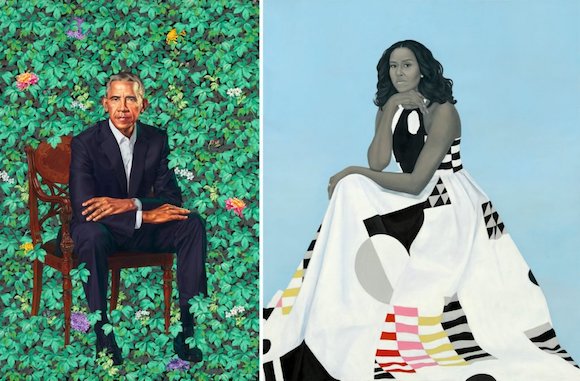 The artists, Kehinde Wiley and Amy Sherald, aren’t known for photorealistic portraits within everyday settings. Sherald isn’t usually bound to the concept of strict resemblance and even Wiley’s is a bit “almost,” but both artists infuse their works with much meaning.

About Sherald’s portrait, Politico remarks, “The dress is as much a window into the former first lady’s identity as her face, and possibly a more accurate one.” Artnews explains the pretty greenery surrounding former President Barack Obama: “The plants carry a certain symbolism: chrysanthemums are the official flower of Chicago, where Obama went to law school and became a politician; jasmine refers to Hawaii, where he spent much of his childhood; and African blue lilies allude to his father, who was Kenyan.”

For more, Brian Boucher over at artnet News scrolled through the Twitterverse for some pretty great responses to the portraits.

I visited the National Portrait Gallery just a few days before this unveiling. It’s a fascinating place, and the exhibit labels beside each portrait offer candid insight into how the artists approached their subjects. The image of President Obama is very good, although I find the greenery around his chair and feet a bit distracting and “forced.” I love Elaine de Kooning’s museum portrait of John F. Kennedy; in fact, the two portraits are very similar, in my opinion — both full-bodied portraits, facing the same direction in their chairs, and the color schemes are complementary.