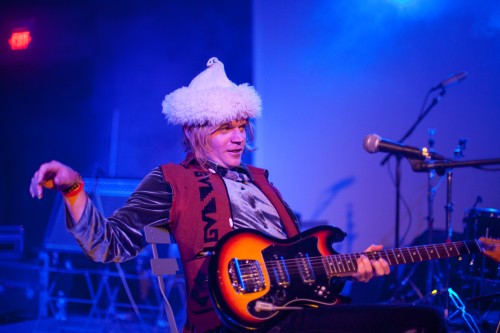 Now in its third year, Marfa Myths will come to Marfa, TX on March 10–13. Curated by Brooklyn-based record label Mexican Summer and Ballroom Marfa, it’s referred to as a “cultural program.” It’s pretty heavy on the music, but there will also be visual art and films. Ballroom Marfa will open the group exhibition After Effect to coincide with the festival, with a reception on Friday, March 11. For the full schedule, go here.

Last year, Billboard called Marfa Myths the “Anti-Coachella” and stated: “There are no VIPs, no velvet ropes, just long brambles called ocotillo, which look like the kind of menacing weeds you expect to find on your way into hell—which is to say, Marfa Myths is a music adventurer’s dream.” (Also last year, Urban Outfitters blogged all about it, which means that now is the time to go, before it gets too, too hipster.)

As usual, it’s scheduled right before South by Southwest, which is March 15-20, for those on the festival circuit. Unfortunately, Marfa Myths attendees would miss SXSW’s pre-festival keynote speaker President Barak Obama on March 11, but can still catch its other keynote speaker, First Lady Michelle Obama on March 16. And there will be tons of music there, too.