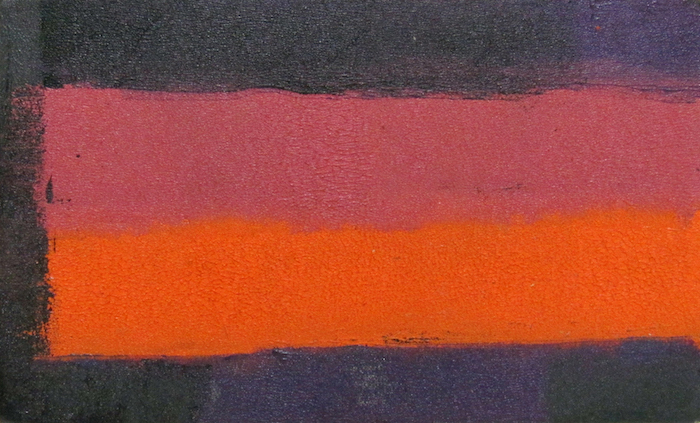 An exhibition at the Moudy Gallery in Fort Worth brings overdue local attention to the city’s artist McKie “Mac” Trotter III (1918-1999) on the centenary of his birth. Far from being a cultural backwater, Fort Worth had some progressive artists in residence in the 1940s and ‘50s. McKie Trotter was a latecomer to the artists’ group referred to as the Fort Worth Circle (today it would be called a collective), which was important primarily due to the social interactions and aesthetic experimentations of the group’s members, rather than for fostering any particular style. Though Trotter didn’t arrive in Fort Worth until 1948, he was already well-versed in regionalism and modernism after being instructed by Lamar Dodd and Howard Wilbur Thomas while completing his MFA at the University of Georgia in Athens.

Trotter showed his work in New York City several times during the late 1940s and ‘50s at the National Academy of Design, the Solomon R. Guggenheim Museum, M. Knoedler & Co., and a solo show at Grand Central Moderns. The 1954 show at the Guggenheim was titled Younger American Painters, and Trotter’s 1953 abstract cityscape Two Cities, lent by Fort Worth collector Ted Weiner, was included with works by art-world heavyweights such as Jackson Pollock, Robert Motherwell and Willem de Kooning. In addition to shows at several museums around the country, Trotter showed his work more locally, with frequency, at the Fort Worth Arts Center, Texas Fine Arts Association in Austin, Texas Watercolor Society in San Antonio, and the Betty McLean Gallery in Dallas. 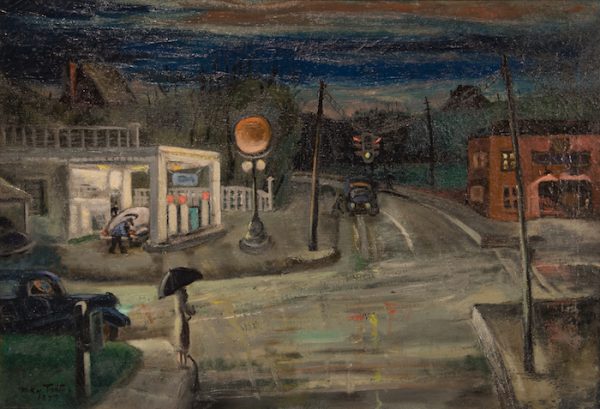 Trotter incorporated the word “scapes” into many of his titles, and one of the strengths of this exhibition is its focused presentation of Trotter’s abstract landscapes. For comparative purposes, an example of his representational work from 1947 is included. Titled Intersection, it has the hallmarks of regionalism in the townscape view of people and buildings on a rainy day at a small town intersection, with wet streets suggested by colors representing reflections of the traffic and station lights being dragged through layers of oil paint. The background landscape in the oil-on-canvas painting is a precursor to his later, more abstract ‘scape’ works — the trees are indicated with simple vertical stick-like strokes and the sky is painted in horizontal bands of color.

The exhibition effectively shows off Trotter’s versatility in various mediums, including graphite, watercolor, screenprints, collage, oil and casein. The largest painting in the exhibition, titled Southwestern Landscape #3, is one of the most complex abstractions among those in the show and is entirely brush-painted oil on canvas. The composition is anchored by two round circular sun/moon forms, and is divided into areas of bright color that reveal Trotter’s fondness for red and orange tonalities juxtaposed with areas of gray and blue-black that suggest the passage of time — night to day, or season to season. The central swirling shapes may represent natural forces on the landscape, like wind or storm clouds. 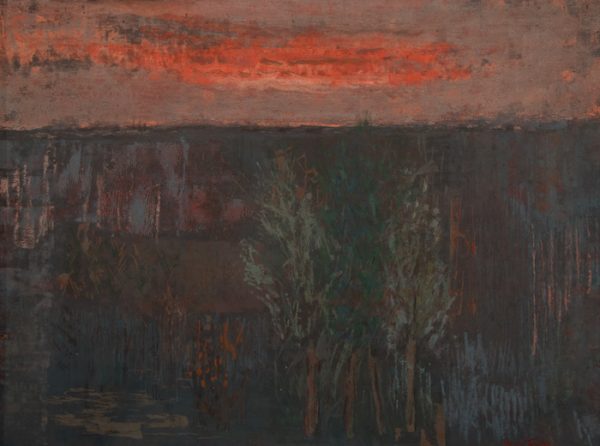 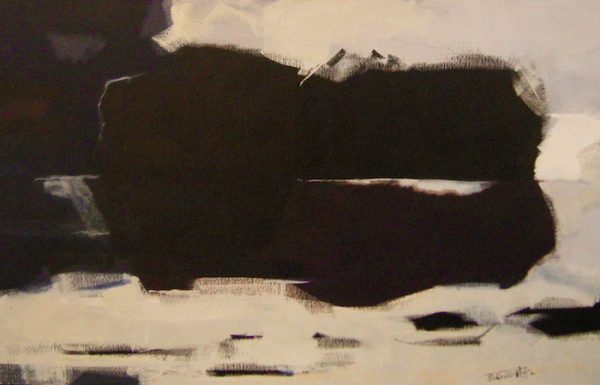 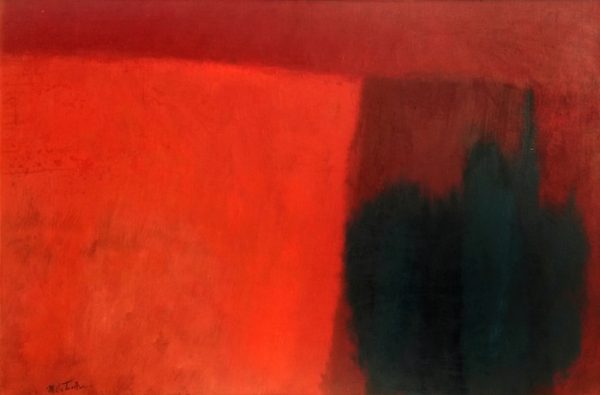 Trotter certainly saw and responded to the work of the Abstract Expressionists. Works like Late Evening Landscape, Sea III, and Earthscape may invite comparisons to Mark Rothko and Robert Motherwell, but the influence of those artists on Trotter was synthesized rather than imitated by him. Although Trotter’s work appears spontaneous and gestural, there is evidence that he drew studies of the compositions and planned his color schemes before proceeding with his paintings. Late Evening Landscape appears entirely abstract at a distance, but closer examination shows that it still has direct references to representational landscape. Trotter did not move in a straight trajectory from semi-representational works to increasingly abstract work. He continued both approaches throughout his career. 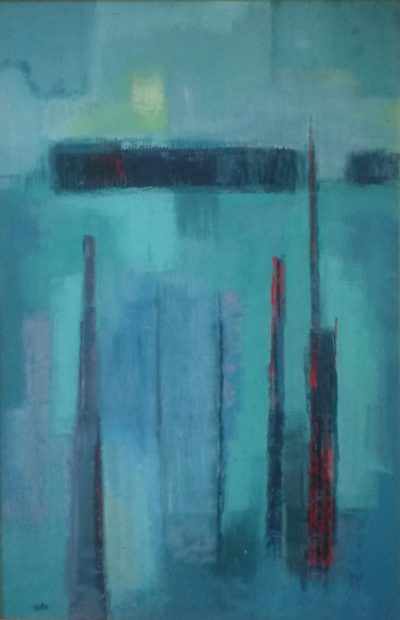 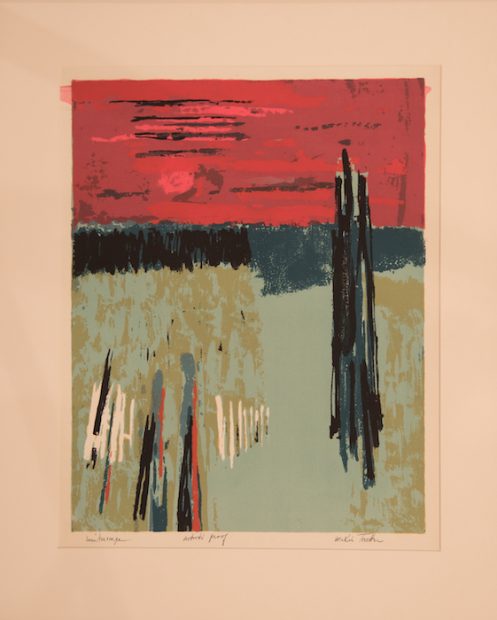 The show reveals Trotter as a strong colorist, who created variations on a compositional theme using differing color schemes and media, such as the painting Winter #4 and the silkscreen Winterscape. The 1963 Earthscape is the most recent work in the exhibition, and it achieves its monumentality through strong color contrasts of its simple forms, enhanced by a blurred effect at their edges in the brushed application of the casein. 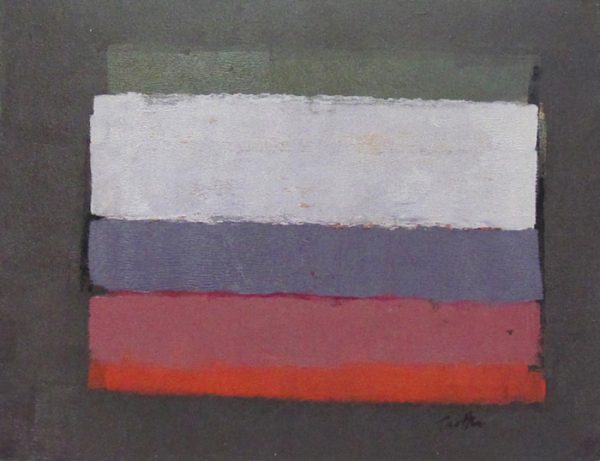 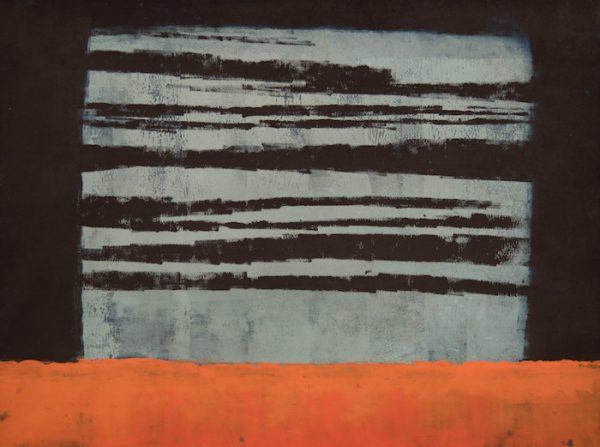 Innovative coloristic and textural effects predominate in a pleasing group of small-scale paintings on masonite. These small ‘scapes’ range from directly referencing the landscape in Untitled (Green Horizon) to totally reductive form expressed through color in Fields. These works showcase one of Trotter’s favorite painting techniques: he used a printing brayer to roll on tacky oil paint, and the brayer leaves a distinctive raised texture that’s found in paintings throughout this show.

Trotter uses a purplish gray and an opaque black as framing elements in both Fields and an untitled work from 1959. This framing device creates an ambiguous dimension to the suggestion of landscape by isolating and further abstracting the stacked bands of color.

Unlike some of the Fort Worth Circle artists who later decamped to New York City or Santa Fe, Trotter chose to stay in Fort Worth, where he first taught at Texas Wesleyan College for five years, and was appointed as the head of the art department. In 1953, he became professor in Texas Christian University’s art program and taught painting for the next 34 years, until his retirement in 1988. Among his students were Jack Boynton, who moved to Houston, and Fort Worth artists John Hartley, David Conn and Ron Crouch, among many others. So it’s fitting that a group of five TCU first-year MA art history students — Dery Martinez-Bonilla, Nicole McKowen, Alexis Meldrum, Ashton Smyth, and Tessa ter Horst — took the opportunity to research and curate this well-conceived exhibition, including selecting the work and writing catalog essays for a nicely produced exhibition booklet. (They also installed the show.) Former students of Trotter recall that he was very modest about his accomplishments, but he no doubt would have approved of having his work used in an educational context to provide valuable experience for another generation of art students. The exhibition continues through Thursday, Feb. 8.

Through Feb. 8, 2018 at Moudy Gallery, Texas Christian University, Fort Worth.