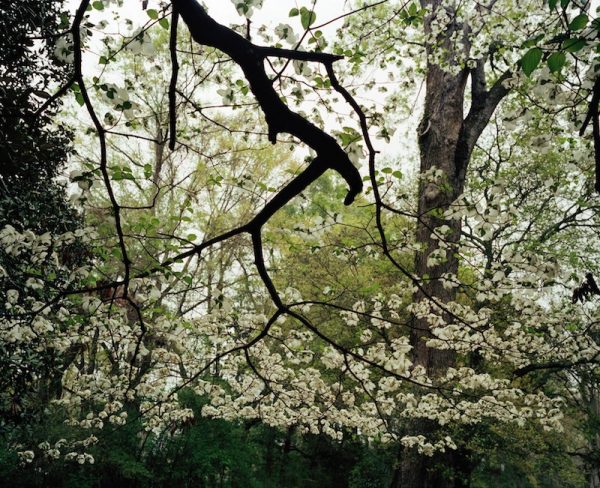 Photographer Luther Smith bids farewell to 35 years of teaching in a finely-honed “mini-retrospective” of his work at TCU’s Moudy Gallery. Curated by TCU’s Sara-Jayne Parsons, the show is arranged in a series of vignettes that are drawn from the different bodies of work that Smith has crafted over the past 45 years. Smith was born in Tishomingo County, Mississippi where he spent his early childhood; then his family moved to Aurora, Illinois. His photographic study began during his undergraduate degree at University of Illinois at Urbana-Champaign, after which he studied with Harry Callahan and Aaron Siskind while completing an MFA at Rhode Island School of Design. Smith stayed on in Champaign to spend the first nine years of his teaching career. 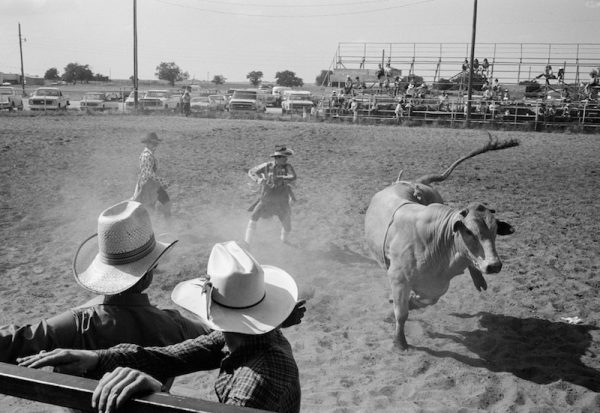 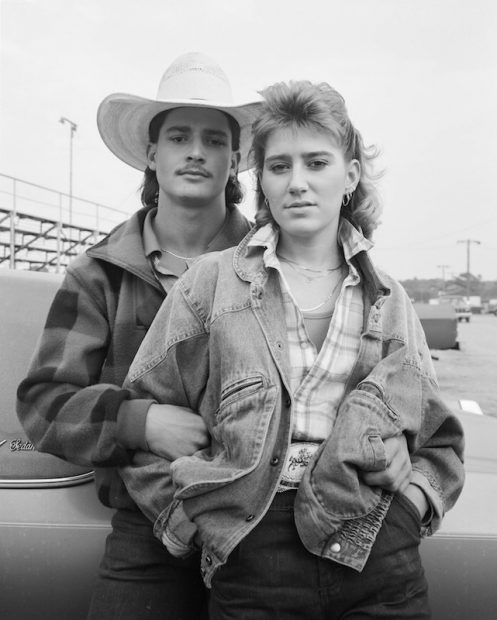 Smith’s arrival in Fort Worth in 1983 to teach photography at TCU is illustrated with a selection of images from his high school rodeo series, taken with a 35mm portable camera. The black-and-white silver gelatin prints show the typical rodeo activities of roping and bulldogging, but also provide vivid portraits of the young men and women who threw themselves into the hard work and danger of working with these animals. The traditional western gear of the participants becomes a compositional element as a pair of boys in white hats counterbalance a muscular bull and its shadow. Smith’s portraits from this period reveal youth transitioning to adulthood, a theme that he still enjoys.

In 1986, following the rodeo series, Smith turned to landscape photography. He embarked on a series of photographs of the Trinity River in Texas, initially using an 8×10” view camera and later, a 7×17” panoramic camera. He systematically followed the river from its origins in the West, East, Clear and Elm Forks to the Trinity Bay basin and recorded the controlled sections of levees, the untamed sections, the eroded banks, flooding, and areas littered with trash. Gleaming expanses of the river sometimes dominate the images, and sometimes the water is nearly invisible so that the surrounding landscape has preeminence. His Trinity River series work was partially supported by a TCU Research and Activities Fund grant during a sabbatical in 1990-91. A selection of these black-and-white images were eventually published by TCU Press in 1997 book The Trinity River: Photographs by Luther Smith. 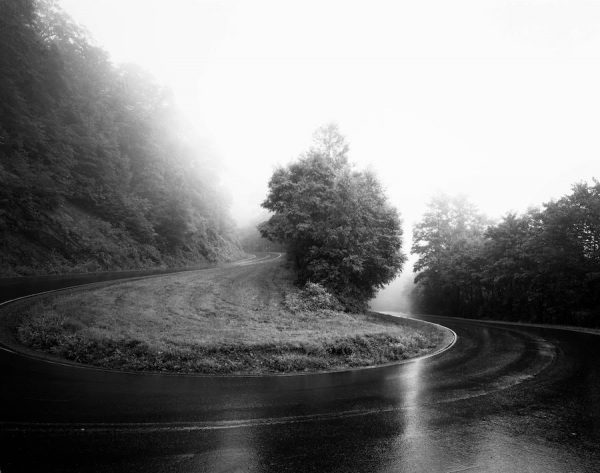 Another ongoing series is The South, which takes Smith back to the region of his childhood. Images were produced with multiple cameras. Trees are a dominant element in many of these images, in all of their variety and linear qualities and shapes. Reaching tendril-like branches of live oak trees contrast with the perfect stasis of the round tree form anchoring a bend in a misty road. 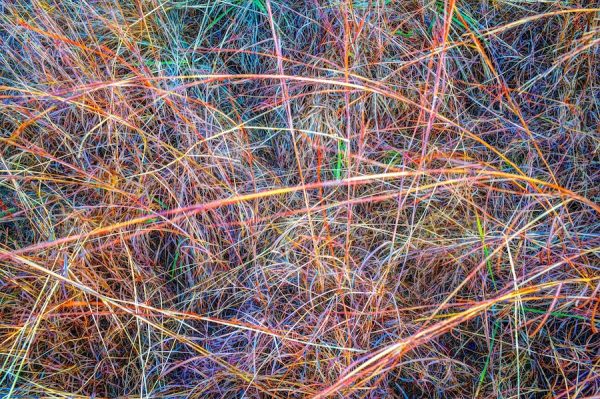 Closer to home, Smith found a wealth of material a few miles from his house in the Where I Live series. This series also marks his transition from black-and-white images to color, and his use of digital cameras. In his interview with Debora Hunter*, Smith remarks that “Light is really important in black and white, and it defines the picture in many ways, but in color, it adds this other dimension to it that has nothing to do with texture and form.” A close-up view of long grass pulses with heightened colors, ranging from yellow-oranges, pink and magenta to sections of blue, purple and bright green. 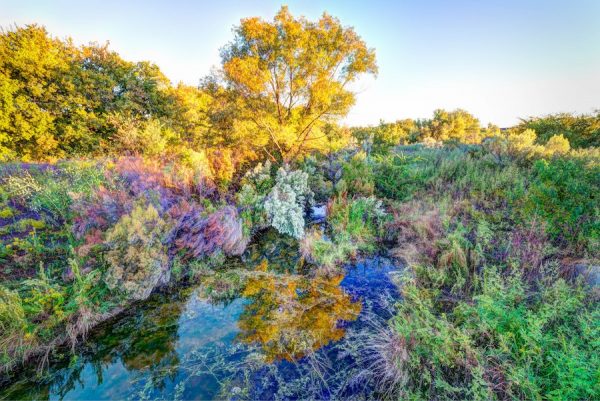 Smith’s exploration of HDR post-production and digital-printing techniques accentuates color into a range beyond our traditional ideas of naturalism. “I do like the idea of color that is a surprise. All of the colors are there, they are just hyped up. So on a day where there’s sun in the sky, and there’s shade, usually, the shade much more blue than the other light that’s there, but you don’t notice it because your mind corrects for it.” 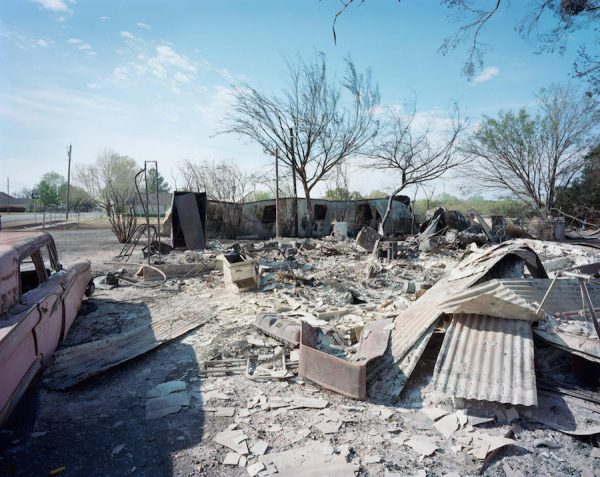 A more sobering counterpoint to this bright work is photographs that Smith has taken after devastating wildfires in recent years. One image shows a dead horse lying on its side after being trapped by the fire, while another shows the remains of a mobile home and a vintage car, capturing the tragic impact on the lives of both animals and people. Smith comments that while being moved by the tragedy of natural disasters, he also responds to the tonal range of the color in the scorched landscapes. “Really hot fires turn everything to this sort of cyan ash. It’s this very strange color, and then there’s always that black, that’s one of the deepest blacks that you can see.” 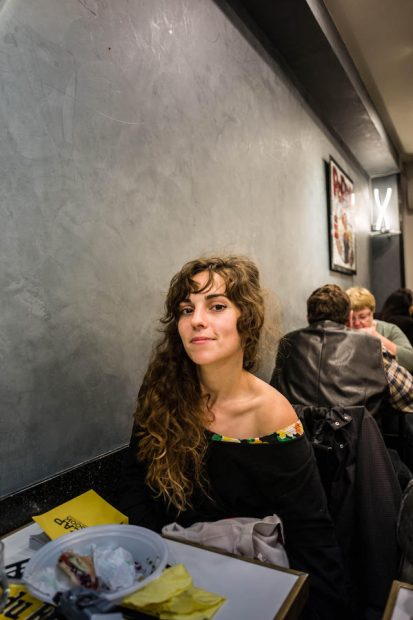 A recent trip to Paris by Smith and his wife Pat resulted in a colorful series, including a street view of a building splashed with bright graffiti and further painted with blue shadows cast by the adjacent street trees. The trip also produced informal portraiture, as in the image of a young woman that Smith captured after he and his wife chatted with her at a crowded café. Retirement will provide more opportunities for travel, and Smith is still considering what projects he might pursue.

*Quotes are from the interview conducted with Smith by retired SMU professor and photographer Debora Hunter, and published in the brochure accompanying the exhibition by The Art Galleries at TCU.