Dallas Contemporary Will Organize the Ukrainian Pavilion for the Venice Biennale 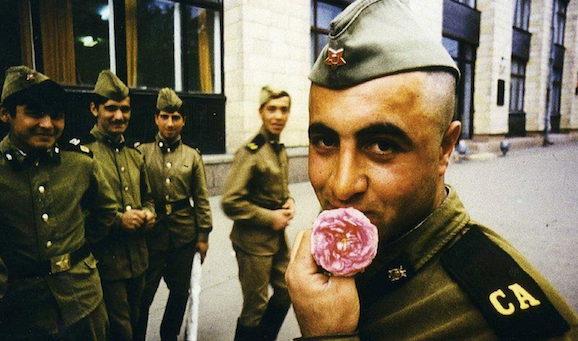 Via the Contemporary: “…Mikhailov will present a new series entitled Parliament (2014-ongoing) which focuses on photography’s interaction with media interfaces, and the interplay between analogue and digital representation,” and this work “…is symptomatic of the current media landscape and the post-truth society we live in. Decomposition of the image in the presented photographs alludes to cyberbalkanization, the phenomenon of echo-chambers, and splintering of the media communities.”

Also on show, organized by the Contemporary, will be “…an expanded interpretation of the biennale’s theme of discoveries and rediscoveries through a series of unique commissions in which Ukrainian artists will create and perform works that reference the artistic oeuvre of Boris Mikhailov and reflect on the lineage of Ukrainian contemporary art.”

Mikhailov, born in 1938 in Kharkiv, has been an active and highly influential artist for four decades through Soviet and  Post-Soviet Ukraine. The Ukraine connection with the Dallas Contemporary is with some of its key leadership: Dorshenko has acted as the commissioner of the Ukrainian Pavilion in 2007 and 2009, and was once director of the PinchukArtCentre in Kiev; and Kudelia, who is from Ukraine, was recently Chair of External Relations at Ukraine’s Art Arsenal in Kiev. Both maintain strong ties with the region.

The exhibition will be on view from May 13th to November 26th in Venice, Italy, and will come to the Dallas Contemporary in 2018.

Why It Will Be Difficult for Peter Doroshenko...