A Mural of Lee Harvey Oswald Is Up in Dallas 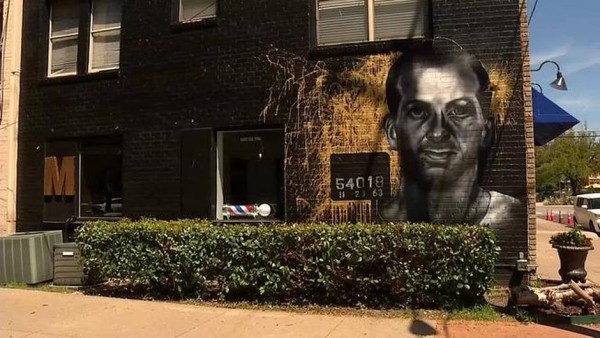 It’s one thing to name a (beloved) Dallas bar after Lee Harvey. But a new privately commissioned mural of Lee Harvey Oswald is nearly complete at the corner of Madison and 7th in the Oak Cliff neighborhood of Dallas. It’s positioned for high-traffic views in the heart of the Bishop Arts District.

Christian Avanti, the owner of the Members Only barbershop (the mural is on its outside wall) has asked artist Theo Ponchaveli to create the mug-shot likeness of Oswald. When it’s finished accompanying text will read “Forgive your enemies but never forget their names.” Ponchaveli has painted (non-Oswald) Kennedy-related murals in the past in Dallas—during the city’s 50th anniversary commemoration of the assassination, in 2013.

Oswald of course lived Oak Cliff, and was in fact arrested blocks away from the mural’ site at the (alive and very well) Texas Theatre, hours after President Kennedy’s assassination.

Avanti is quoted in the Dallas Morning News: “It is kind of our way of saying we are not paying homage to Oswald.”  Interesting way to go about not doing something. Also, take a moment to check out the lively comments section underneath the DMN’s news post. It seems the vast majority of web commenters have decided, passionately and once and for all, that Oswald was not the trigger man.