by Michael McFadden May 13, 2016
FacebookTwitterEmail 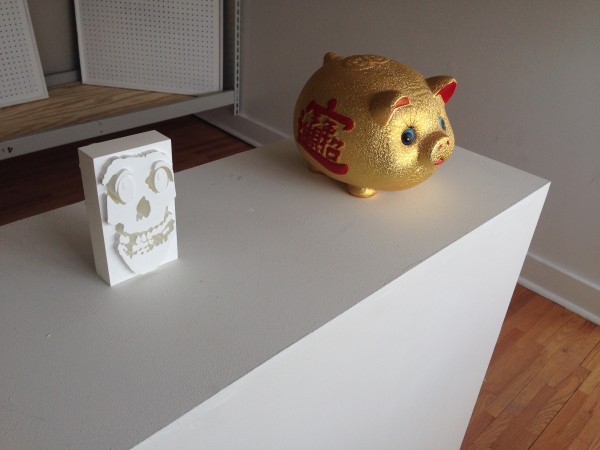 London Alexander and Chris Henry, the founders of a new space in Montrose called Blank Check Gallery, are interested in the notion of access in our modern age. The two young artists-turned-gallerists-but-still-also-artists share a live-work space and have built out a section of it to create a gallery to show the work of their friends as well as artists they feel are not being given exhibitions by conventional galleries, or have a style of work that isn’t being shown in other Houston spaces.

On view now is The Delicious Life-Giving Fluid, an exhibition and installation by co-founder Chris Henry. The exhibition opens with a pedestal displaying two small objects that provide a subtle hint as to what the show as a whole represents. A plump golden pig with blue eyes and big black irises sits smiling, its eyes glancing left toward a white sculpture roughly the size of a Pocky box.This weirdly happy pig is branded with a bright red Chinese character and the box is thin and white with a design rising out of its front and back that resemble the Misfits skull, but with big anime eyes.

The pig and the skull’s anime eyes introduce a general notion of “Asia” and speaks to how such a visual marker can pervade a culture to the extent that it takes on a meaning of its own. These two presentations of the eyes are separate yet connected, and act as the foundation of the show but complicate its context. More on this in a moment. 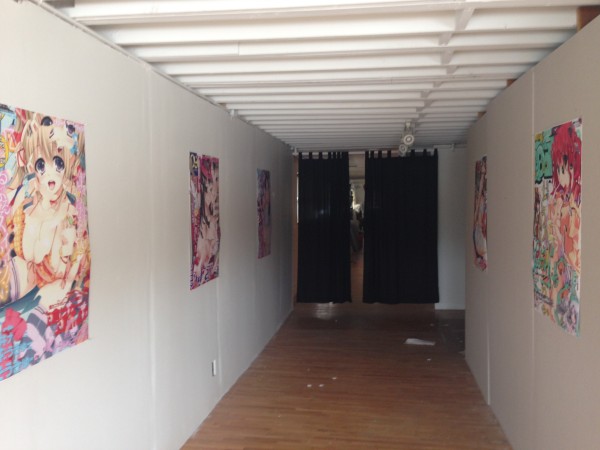 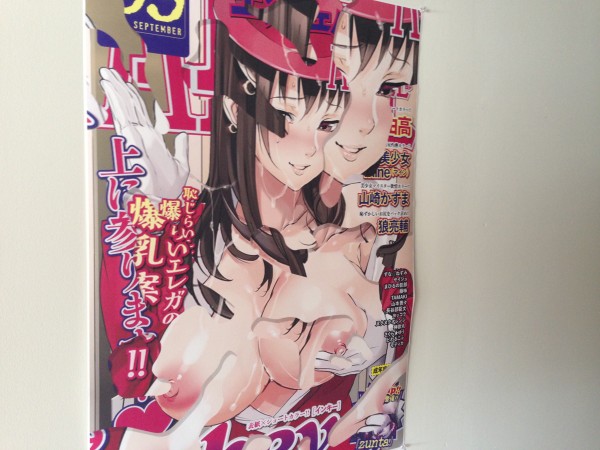 At the end of the hallway, the artist has constructed a room and filled it with garbage, a cardboard box with a sleeping bag, a laptop playing anime, computer towers, a pile of cables, plugs, and adapters, and a rack with four Japanese-branded soccer jerseys designed by the artist. The garbage ranges from empty Lone Star beer cans and cigarette packs to ramen wrappers and newspapers. The floor of the space is a flattened grid of broken-down cardboard boxes, and the rear wall is a stack of boxes, roughly 10 feet high, with that same anime Misfits skull spray-painted on. 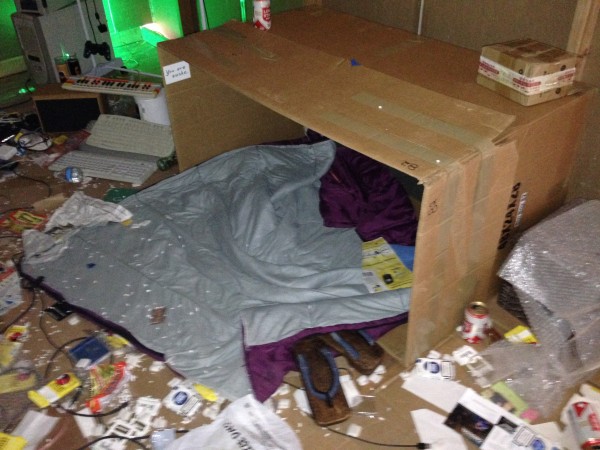 The space is Henry’s reconstruction of a hikikimori’s room. Hikikimori is a Japanese term which means “withdrawal” and is also used to describe those who withdraw. It’s a lot like agoraphobia. There’s an old saying in Japan: “The nail that sticks out gets hammered down.” Historically, Japanese culture is very group-oriented. You live with your parents until you get married, and in exchange for this, you support your parents when they get too old to take care of themselves. That worked better in a steadier economy; that bubble burst in the 1980s. Younger generations are facing drastic insecurity, and Japan has also seen a shift from people being group-oriented to more individualistic. More nails are starting to stick up, and older generations are trying to hammer them down. The tension can be quite subtle but also traumatic within families. This is the driver of hikikomori. 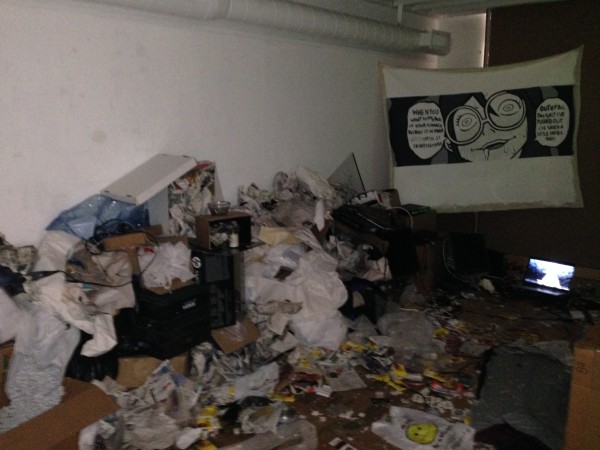 Some of the trauma might come from the withdrawal itself. The hikikomori hermits himself away, potentially severing contact with his family, and wallows in a swamp of negative emotions. In a 2013 BBC.com article, one hikikomori details the condition as “the desire to go outside, anger towards society and my parents, sadness about having this condition, fear about what would happen in the future, and jealousy towards the people who were leading normal lives.” In the past, hikikomori would at least have to leave their room to get groceries, but the Internet now allows them to buy everything they need online.

Henry observes this subculture through the lens of the Internet and has taken a great deal of liberty in his reconstruction of the bedroom; he’s abstracted and transformed it in an act of translation. Hikikomori are hermits but don’t necessarily live a sad garbage life. The cardboard boxes (including the installation itself which is essentially a cardboard box) reference the packing up and shipping of cultures across borders via websites, forums, social media, etc.

Henry’s version of hikikomori might complicate a viewer’s understanding of it if they’re not already familiar with the condition, but this is an artist’s prerogative. A viewer walks into a stranger’s room and wonders at its contents and guesses at what kind of person lives there and why they choose to live this sad garbage life. And in the end, that’s likely what they’d be thinking in an actual hikikomori’s room. At Blank Check, Henry has imported an exotic problem and made it familiar.

Up through May 19 at Blank Check Gallery, Houston.