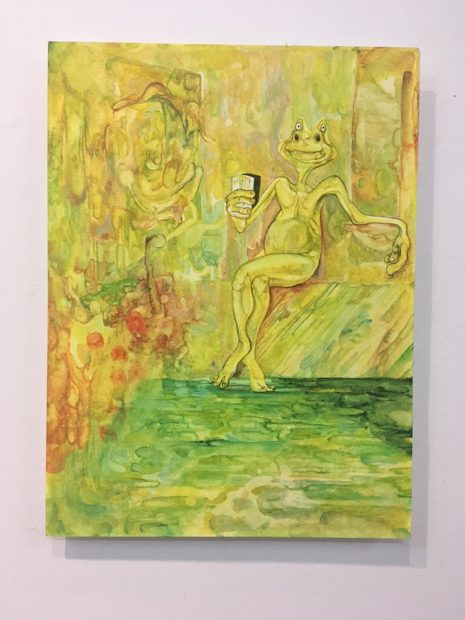 In mid-July, Blank Check in Houston opened up a MVP show with recently returned local champ Cody Ledvina. The new solo exhibition, titled Crawdaddy Ledvina, Cody USA, features a collection of new drawings and works on paper from the past four years. The individual pieces, described by the artist as his closest friends and worst kind of therapist, are enthralling.

Blank Check is a small and well-articulated space located in the Sawyer Yards complex, hidden among a group of artists’ work studios. Run by London Ham and on a timeshare schedule with Cardoza Fine Art, the gallery is well-informed about Houston’s art comings and goings and deeply involved with its artists and the environment in which they evolve. For such a compact space, 15 feet by 10 feet, the programming by both Cardoza and Ham is rarely dull. And Houston’s creative community is versed in the musings of Cody Ledvina — from his performances, including dragging a parachute outside the courthouse of the Enron trials, to his political sign collages around Montrose, to, of course, his days running the loved and missed The Joanna project space. 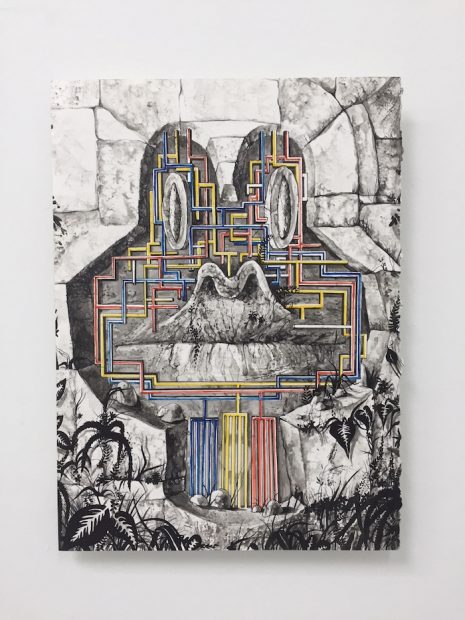 Ledvina is a short-circuited Renaissance Man, and I mean that in the best possible way. I had heard about his Blank Check show and was eager to see how it was going to be presented, since it was purported to reference some of Ledvina’s other shows in which he made works and then cast them into the belly of a construction crater. 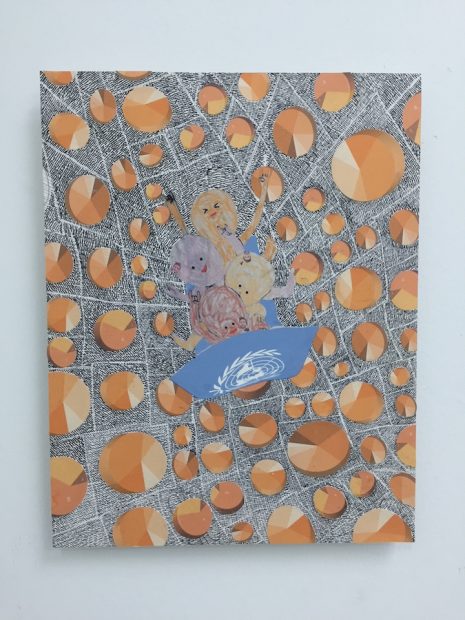 The new works on paper range greatly in subject matter and technique. Drawings, watercolor washes, and pen and ink are executed with madman precision. I tried to find a connective narrative, or to believe there was one hidden within or between them. I didn’t, and yet I was impressed by their impact as individual works. His sketches and doodles provide the blueprints for a bigger idea or project. Or, the works are created as a series of miniature versions of the paintings that are companion pieces. Ledvina describes the drawings as a way to work out stuck or jammed thoughts banging around upstairs. Their details are something the viewer could come back to repeatedly, and discover something new each time. There are moments in them that may be intentional, or a “happy accident” (as Bob Ross would say). For instance: a small face of a character, half scratched out and corrected too many times; or the remnants of a drink ring with colors bleeding together on the paper around where the cold beverage once sat. When it comes to work, Ledvina’s mind lives in a state of controlled chaos that notably and strangely brings the pieces together. 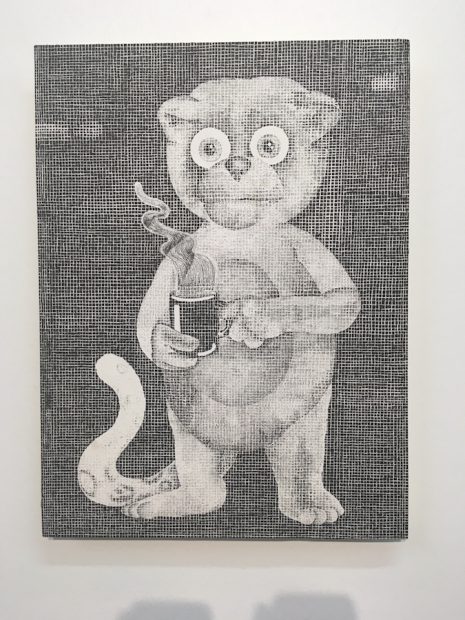 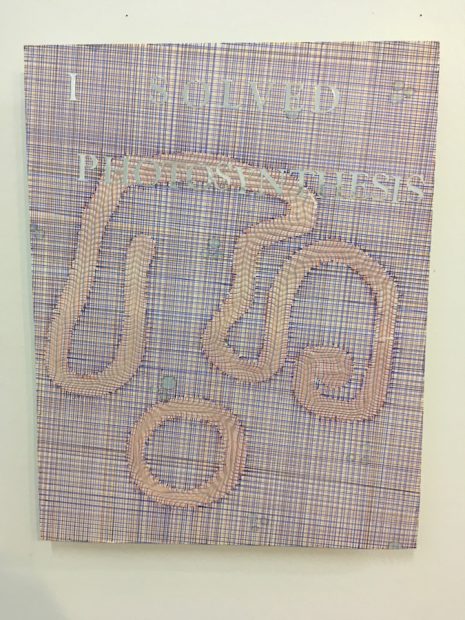 I couldn’t get past Ledvina’s absurdity, which enjoyably evoked, for me, the 16th-century Italian painter Giuseppe Arcimboldo. While the rest of the old master painters were creating epic bodies of work for the church, Arcimboldo was painting portraits of nobles with their faces constructed out of vegetables. The critics debate that Arcimboldo’s work was a creation of great fantasy, or a product of a deranged mind. I’d say that also handily describes this new show by Crawdaddy Ledvina. He pulls from popular culture, dreamscapes, and day-to-day trials and tribulations, and it results in pure eye candy. 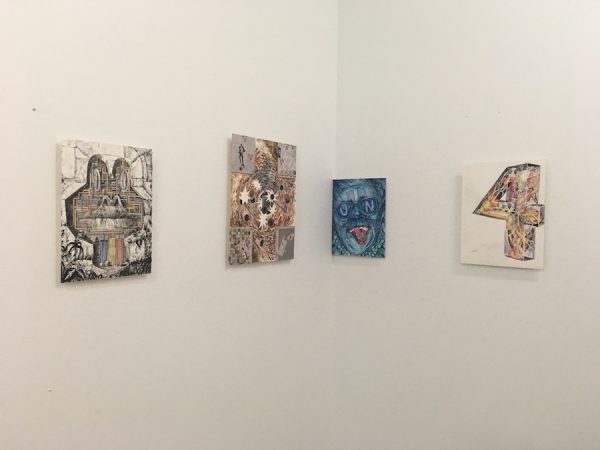 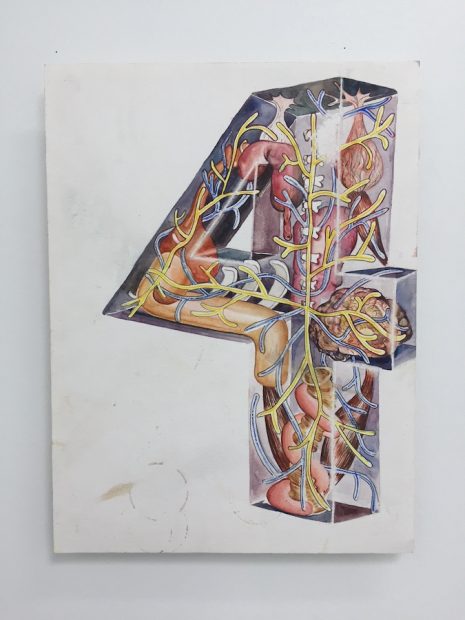 Working often in cut-paper collage and a blend of sculpture and 2D, Ledvina has refined his process for this show. A vortex of cartoon explosions, a tile floor, and Barack Obama shouldn’t fit together, but Ledvina makes it happen. He’s done a painting on paper of a glass number four with exposed human-like organs. What does it mean? Who the fuck knows? Maybe Ledvina doesn’t know either, and this is why the whole thing works. 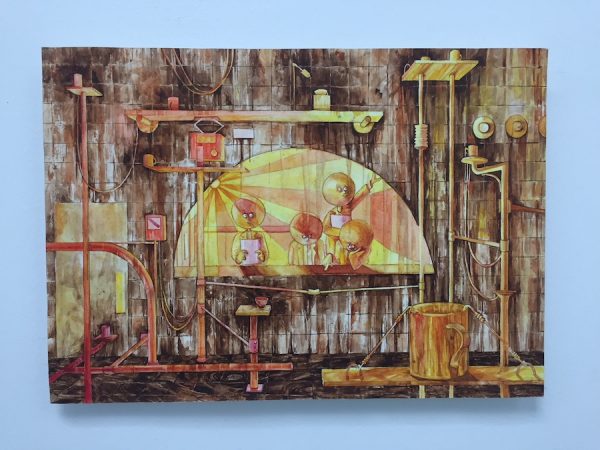 I recently visited Ledvina in his studio, where he described just “making work.” There is no agenda with his practice, and there’s no end goal. His work is for sale, but isn’t t made for the hustle-and-flow art market. (This is pretty evident when he hangs work under freeway bridges or tosses it into construction holes, only to be viewed by the bulging-eyed mole men featured as subjects in some of his other works.) Sometimes it’s refreshing to see an artist, especially this one, present such a take-it-or-leave-it proposition.

I love you Paul. I miss you Cody. I admire you Pablo.