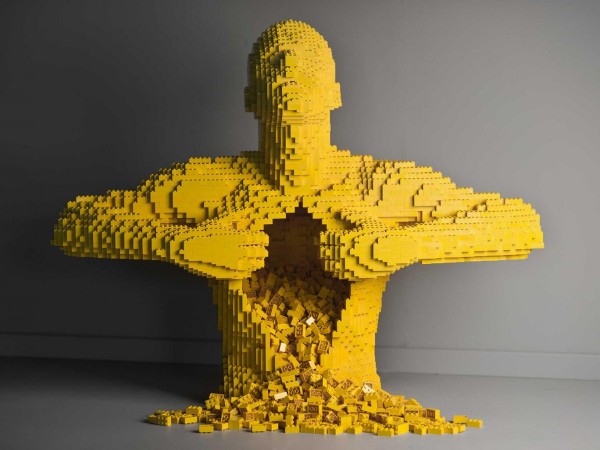 From ‘The Art of the Brick’

Legos in art museums are nothing new. Nathan Sawaya builds intricate, kitschy reproductions of famous historical artworks from Legos. His Art of the Brick exhibition has been touring the world’s museums since 2007. If you missed it at the Art Museum of South Texas in 2010 you could have caught it at the Tyler Museum of Art in 2015, or in Beijing, Johannesburg, Tel Aviv, or at any of 50 other venues in between. It’s one of CNN’s top ten “must see global exhibitions” and a surefire attendance booster, but it’s just not respectable as art. 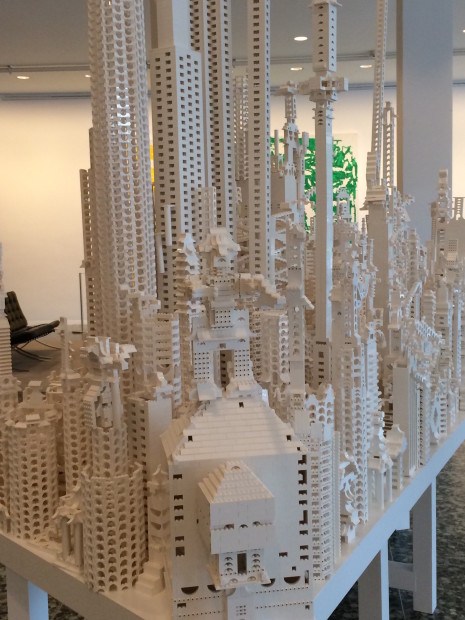 I took a couple of kids, Lego experts, to see both. Eliason’s piece, right near the MFAH’s main entrance, works just like Legos in the playroom at home, but better: a cadre of museum guards sweeps up the stray pieces. A mound of creamy, all-white blocks fill a large hexagonal table, invariably crowded with people busily snapping bricks together. Display tables on either side hold a cityscape of structures left by participants, beginning with teams of architecture students from Rice and TSU who were invited to start off the project. I’m not sure what instructions these seed-builders were given, but the results are a crowd of white towers that both encourage and constrain participants to add similar constructions. Star destroyers and polar bears are few; one enterprising builder perched an all-white robot atop a building.

The brilliance of the piece is Eliason’s willingness to stand back and let Legos do their thing, content to act as facilitator. The credit for the piece’s success is about 85% Lego, and 10% Eliason, and 5% participant input. 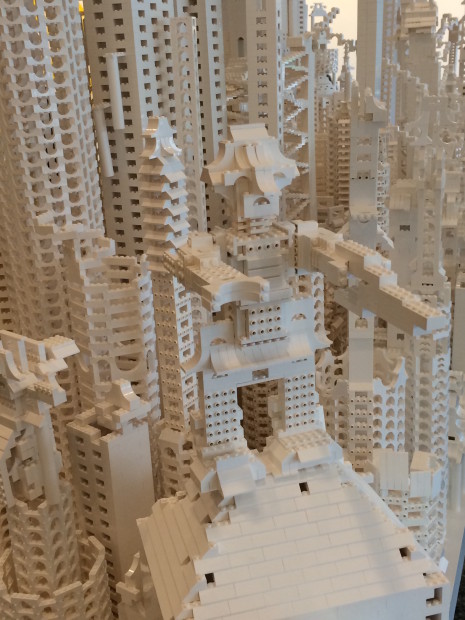 The piece’s playful, participatory style doesn’t hide its more serious themes about collaboration, conformity, and choice. It seems young and old have set to work busily adding to the piece, and those of us with an immediate urge to destroy suppress it. That’s collaboration in a nutshell: people working together, subtly directed by authority, with dissidents pressured to keep their mouths shut. It’s enjoyable or insufferable, depending on your tolerance for socialization. In Houston, a city that rebuilds itself every ten years, the mutability of the modernist Lego skyline is especially pointed. 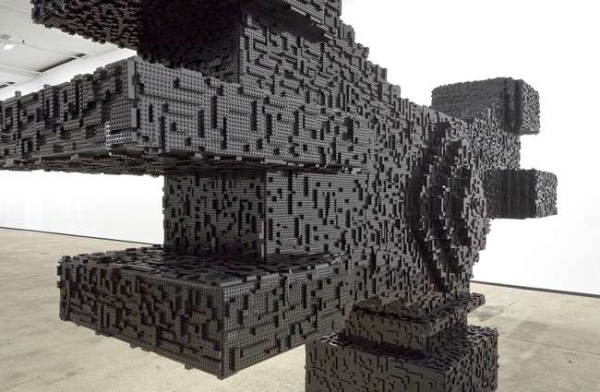 Upstairs, Los Carpinteros—the Cuban collective consisting of Dagoberto Rodriguez and Marco Castillo—has its own big Lego piece, this time in all black. Podgaric Toy, from 2013, is a blocky Lego version of Dušan Džamonja’s 1967 Monument to the Revolution in Podgarić, Croatia. The original is 20 meters tall, in brutalist concrete; the Carpinteros version is only about the size of a compact car, and made of wood covered in Legos. Revolutions aren’t what they used to be.

I read that Ai WeiWei is doing Legos, too. Recently, there was an international brouhaha when the Lego company foolishly and unsucessfully tried to control the end use of their products for “political statements” by making Ai buy his Legos retail. But the marketing misstep was repaired by the shamed company, so I guess Lego is now positioned to become a serious art-making tool.