The exhibition For a New World to Come: Experiments in Japanese Art and Photography, 1968–1979 opened this past weekend at the Museum of Fine Arts, Houston. Starting amidst the uncertainties and pivotal clashes of 1968, the show frames an important dozen years of stylistic and conceptual experimentation in the arts in Japan, and illuminates the importance of photography in the formation of the country’s contemporary art and cultural identity. Hundreds of photographic prints, publications, film and video installations, paintings, and sculptures—many of which have never before been seen in this country—reveal a fantastic laboratory of aggressive reconsideration and creative seeking. It’s exciting to see this stuff, and interesting to consider simultaneous developments in American and European contemporary art. 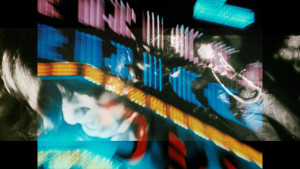 Greeting visitors at the entrance of the exhibition is Toshio Matsumoto’s layered and fast-cut, three-projector film piece, For the Damaged Right Eye, which originally premiered at the Exposé 1968 symposium in Tokyo. It can be seen as initial, experimental sketches of ideas that he would expand upon the following year in his feature film, Funeral Parade Of Roses. Image: © Toshio Matsumoto / Photo: PJMIA

I may write more about the show later, after I’ve had a chance to go back and spend even more time with it. But here I want to focus on one important and very rarely seen work that, due to its one-night-only presentation at the museum, is in danger of being overlooked. In conjunction with For A New World To Come, there will be special, monthly screenings of related films selected by the exhibition’s curator, Yasufumi Nakamori. The first and best in the series (shown THIS FRIDAY evening, March 13, at 7pm) is a singular masterpiece from 1969—the audacious debut feature film from director, video artist, and critic Toshio Matsumoto.

Funeral Parade of Roses (Bara no Sōretsu) tends to be categorized as part of the Japanese New Wave, but that label—or really, any label—is inadequate. Filmed in black and white and told through a non-linear narrative in a mosaic of different filmic styles, this queer revamp of the Oedipus myth follows rebellious, young drag queen Eddie into the strange world of sexual hedonism and political unrest that was Tokyo’s Shinjuku district in the late-60s. Outrageous sex, drugs, dancing, and diva drama eventually give way to Eddie’s mounting inner demons. A seemingly impossible mix of New Wave reflexivity, slapstick comedy, grindhouse shock, and avant-garde aesthetics, the film’s themes and sensibilities were a direct influence on Stanley Kubrick’s A Clockwork Orange.

The role of Eddie is played with surprising nuance by a non-professional actor, credited solely as Peter, who was plucked by the director right out of a Roppongi transvestite bar for the role. (He went on to a few more film roles after this—most notably, as the Fool in Akira Kurosawa’s Ran). Yoshio Tsuchiya, who plays a cabaret owner and Eddie’s older lover, is one of the few professionals in the cast, with several roles behind him (including Kurosawa’s The Seven Samurai and several of Toho Studio’s Godzilla films.) The film also includes members of the influential Fluxus-inspired performance groups, Zero Jigen and Genpei Akasegawa. 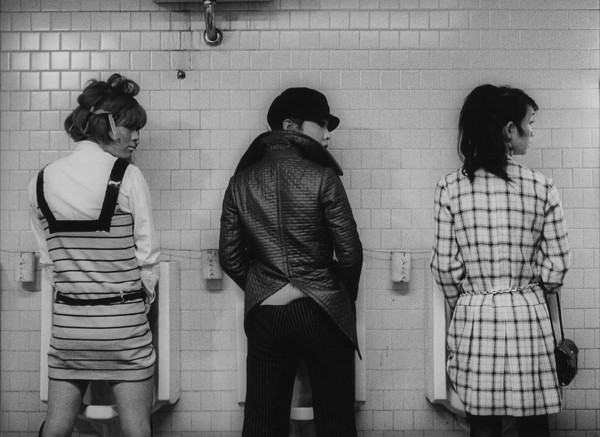 Matsumoto was afforded unheard-of freedoms by creating the film completely outside of the mainstream system. Supported by the progressive, independent production and distribution company Art Theater Guild, Funeral was the first Japanese film to unabashedly represent homosexuality and gay culture. It was also the first to respond to the 1968 Shinjuku Anti-War Day riots that had occurred in the area mere months before shooting.

In addition to his innovative breaking of linear narrative through splintered flashbacks and repetitions, Matsumoto also manipulates time through speed changes and freeze frames, and weaves a dynamic meta-cinema tapestry including inserted bits of text, vérité footage, interviews with the cast, clapboards, solarized shots, and distorted TV news footage. The film’s continual inversions and subversions (myth-flipping, gender-bending, style-hopping, time-warping) can be seen as aggressive and well-orchestrated acts of defiance against the conventions of both traditional cinema and dominant social order in general. It’s a bold effort in what Matsumoto has referred to as his “sensorial pursuit of chaos”—the invention of new methods to reflect new, complex truths.

While Funeral Parade of Roses is often described as shocking, I’m personally most shocked by two things: how surprisingly accessible this dense cinematic circus ends up being, and how seldom it is seen and appreciated—especially in the U.S. At one point, a character in the movie quotes film critic Jonas Mekas: “All definitions of cinema have been erased. The doors are now open.” Friday night’s screening provides a rare opportunity to walk through those doors and into a truly unique, funny, dark, wild, weird world.

The exhibition For a New World to Come: Experiments in Japanese Art and Photography, 1968–1979 will be on view through July 12.

Never heard of this guy and I got a fairly decent vocabulary of Japanese New Wave films and directors. Imamura, Mizoguchi, Ozu, of Suzuki and Shinoda but this guy, nope. Thanks for the introduction and the heads up. Nice review my brother!

Thanks, Garry. This one’s a rarity.

I’ve been a fan of this film for years, but I’ve never seen it on the big screen. I’m excited! Thanks Peter for helping get the word out!