Prints, and Architectural Pathos, at the Art Museum of Southeast Texas

Currently on view at the Art Museum of Southeast Texas in Beaumont is a show of recent works produced by Austin’s Flatbed Press. The exhibit is small, given AMSET’s modest galleries. It’s also uneven, as contemporary printmaking tends to be—but there are some standouts.

Linda Ridgway, who currently has a solo show at the Old Jail Art Center in Albany, is represented by three elegant monoprint drawings of translucent, seemingly x-rayed clothing: a child’s dress, a jacket, and a veil. I like Ridgway’s charged drawings of textiles—I seem to remember a particularly compelling thong from her show at Brand 10 in Fort Worth from a few years ago, as well as some very nice drawings of crocheted lace. I imagine her printmaking process is more technically complicated than it appears, given the spare final results. These works suggest ghostliness, the ethereal nature of memory, and TSA checkpoints. Plus they just look cool. 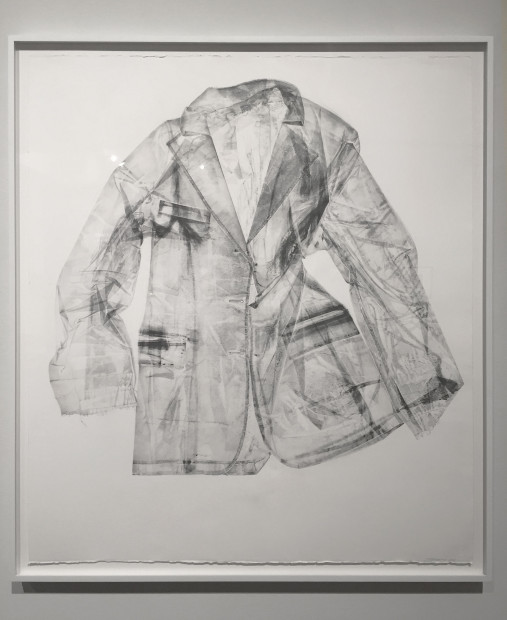 Recently the Houston artist Frank X Tolbert2 has been working on a series of paintings of Texas birds, and as part of this project he’s produced a series of eight color etchings at Flatbed, three of which are included in this show. With his signature heavy, scrawled black lines and flat style, Tolbert is able to effectively convey delicate feathers, nests and Spanish moss, as well as the cold lack of personality that is particular to birds. He channels his spiritual predecessor James Audubon, inserting threatening predators alongside the birds and their young (although his pileated woodpecker looks like it could tear a hole in the polecat nearby). AMSET’s brochure for the exhibition includes a statement from each artist. Tolbert’s reads, simply, “Birds the word,” the main lyric of The Trashmen’s Surfin Bird, and a satisfying riff on John 1:1. 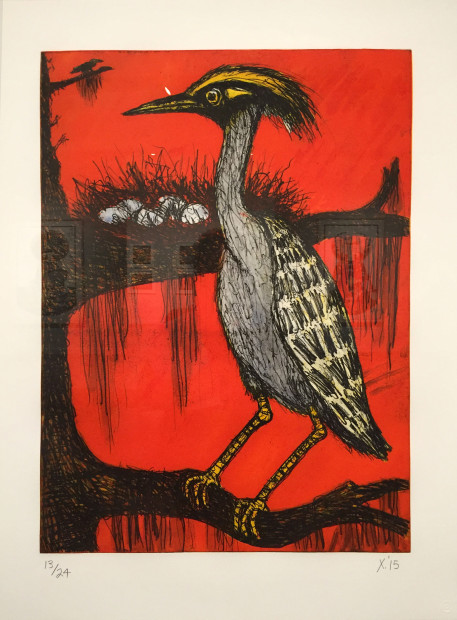 I was never able to get behind Sharon Kopriva’s grody, horror show popes and cardinals of the 1990s and early aughts, but I’ve enjoyed seeing her more recent paintings and works on paper. Her skeletal, hairless hounds of heaven and hell in the three etchings on view at AMSET neatly convey the action of the universe chasing its own tail, with all of us in tow. It would be a stretch to say that there’s humor in these works, but these half-smiling dogs have a whiff of irreverence along with their sense of emaciated threat (Kopriva does love her ribcages). And her dynamic, circular compositions make good use of the scratchy effect of etching. 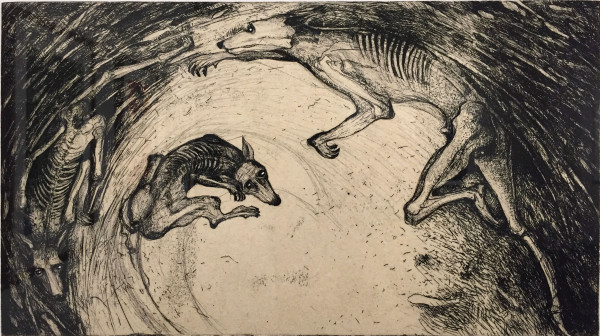 Also in the show are Alice Leora Briggs’ series of intricate woodcuts, which pair her dense, graphic imagery (a dead bird; a baby boy being circumcised; bodies of migrants) with lines of poetry by Mark Strand. Like the masterful sgraffito drawings she’s known for, these prints are about Ciudad Juarez and the terrible things that happen there. Ricky Armendariz is represented by two large, handsome woodcuts that carry the weight of various art histories, including Mexican, Native American, and Western imagery. The pictures, of a bison and an eagle, are loosely interpreted Greek mythological scenes. 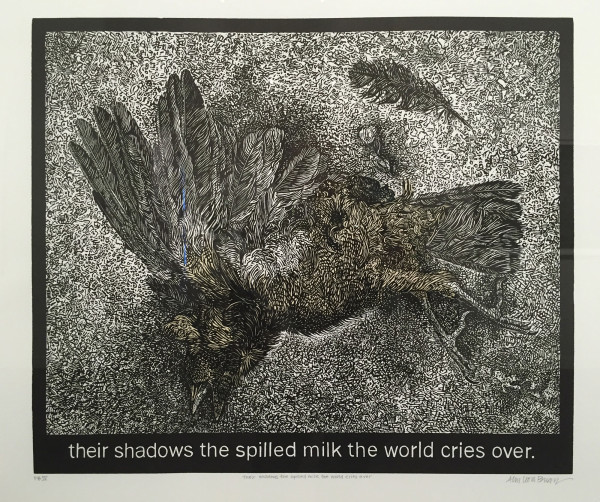 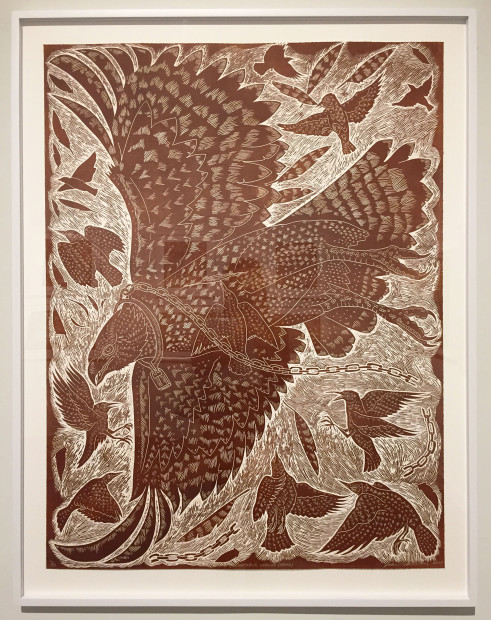 The small temporary galleries where the Flatbed show is installed are the only proper galleries for hanging work in the museum, and so elsewhere one encounters odd moments of permanent collection—a Paul Kittleson figure leaning over the reception desk; a James Surls sculpture that’s stashed, unlit, in a weird alcove high up near the ceiling; paintings hung along a hallway that leads to the museum offices. AMSET has a large collection with a lot of Texas art, and they rotate it out in whatever spaces they can. In their back reception room, I was especially glad to see two meaty, beveled paintings from 1987 by the Houston artist Ken Luce. Tucked into a side room, there is also a permanent display of the folk art totems and statuettes of local artist Felix “Fox” Harris, who died in 1985. 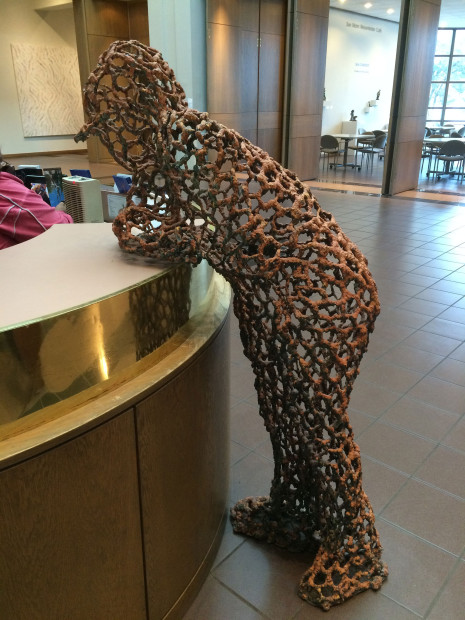 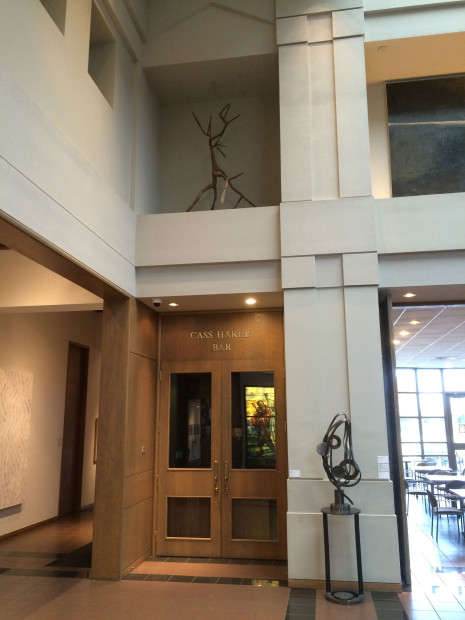 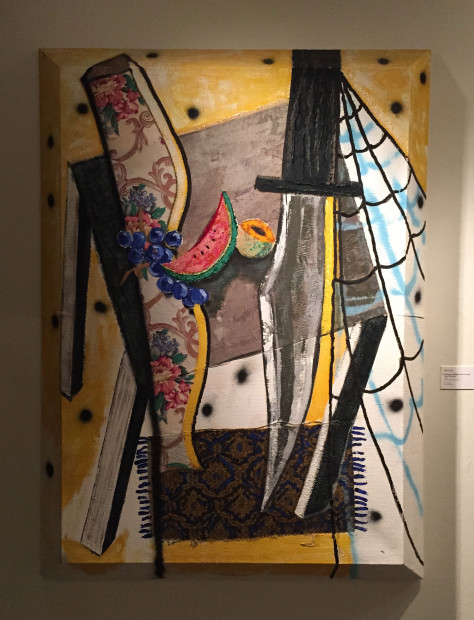 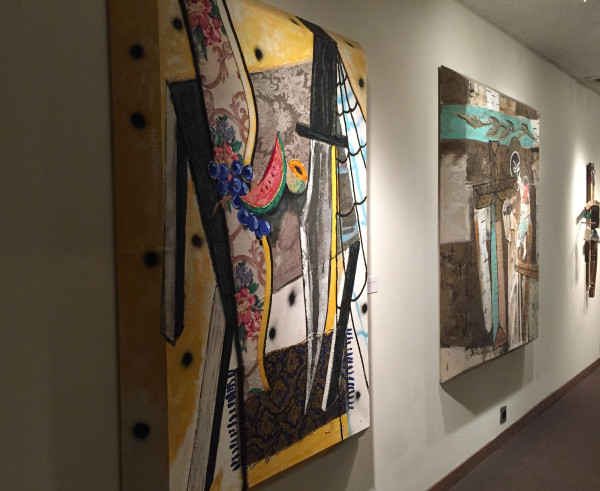 Side view of Ken Luce paintings 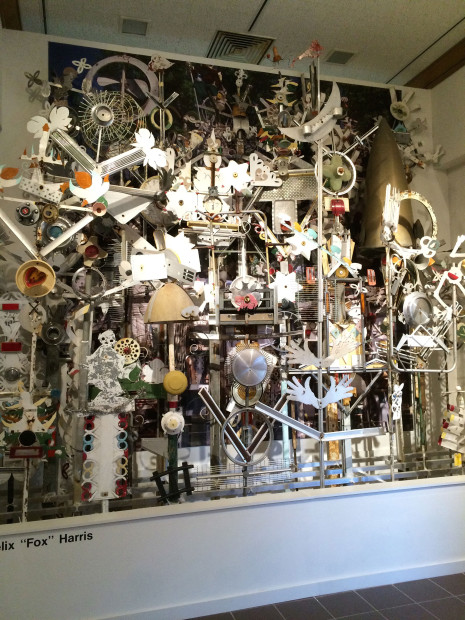 Built in 1987 as what appears to be a municipal party rental hall with some gallery spaces attached, AMSET is a museum in need of architectural intervention if there ever was one. Fortunately, their director Lynn Castle reports that they’re having an “evaluation” in 2016—hopefully this will be the first step towards dynamiting their absurdly large porte-cochere, which feels like a 1980s Beaumont socialite’s idea of Dynasty glamor, and using some of that footprint for gallery space. AMSET should be able to exhibit more of its permanent collection more of the time, rather than having to make do with meager galleries and catch-as-catch-can placement of works (with attendant terrible lighting). This is a museum that has kept the torch burning in Beaumont for years, tirelessly supporting Texas artists with solo shows and catalogs. Their work is important. I hope that someone will help them do something about their space.