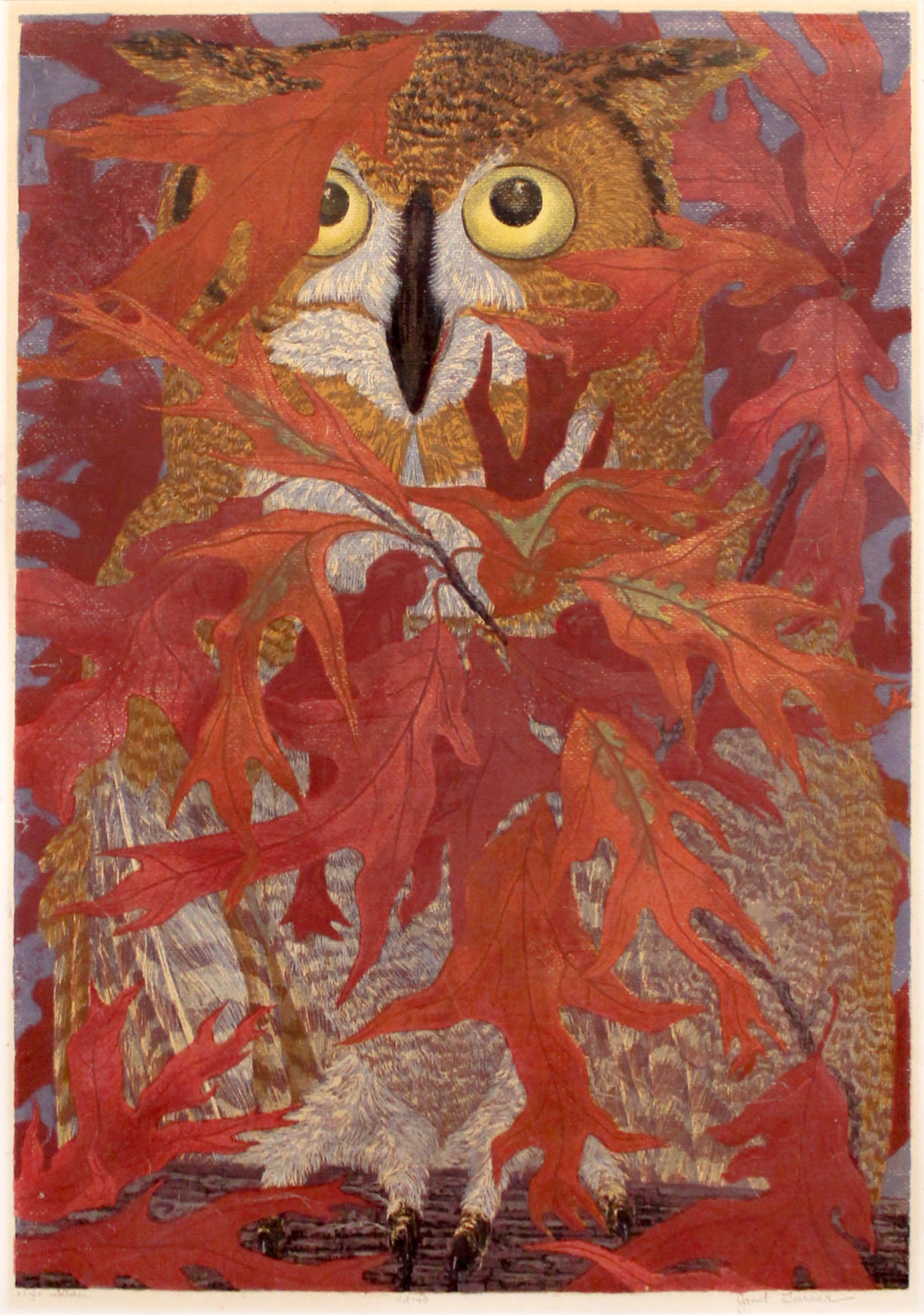 Halfway through my visit last weekend to the Grace Museum in Abilene, I left the big group show downstairs titled Menagerie (about animals in art) and made my way upstairs to the solo show by Janet Turner. There I found all the chatter and buzz in my brain settling down as I walked along the long walls of her prints. It’s not that Turner’s work turned me on so much—though I do like it— as the transition from seeing dozens of artists dealing with animals as subject matter to seeing one artist do so. Turner’s work had a calming effect. It felt embracing and symphonic compared to what was happening downstairs. 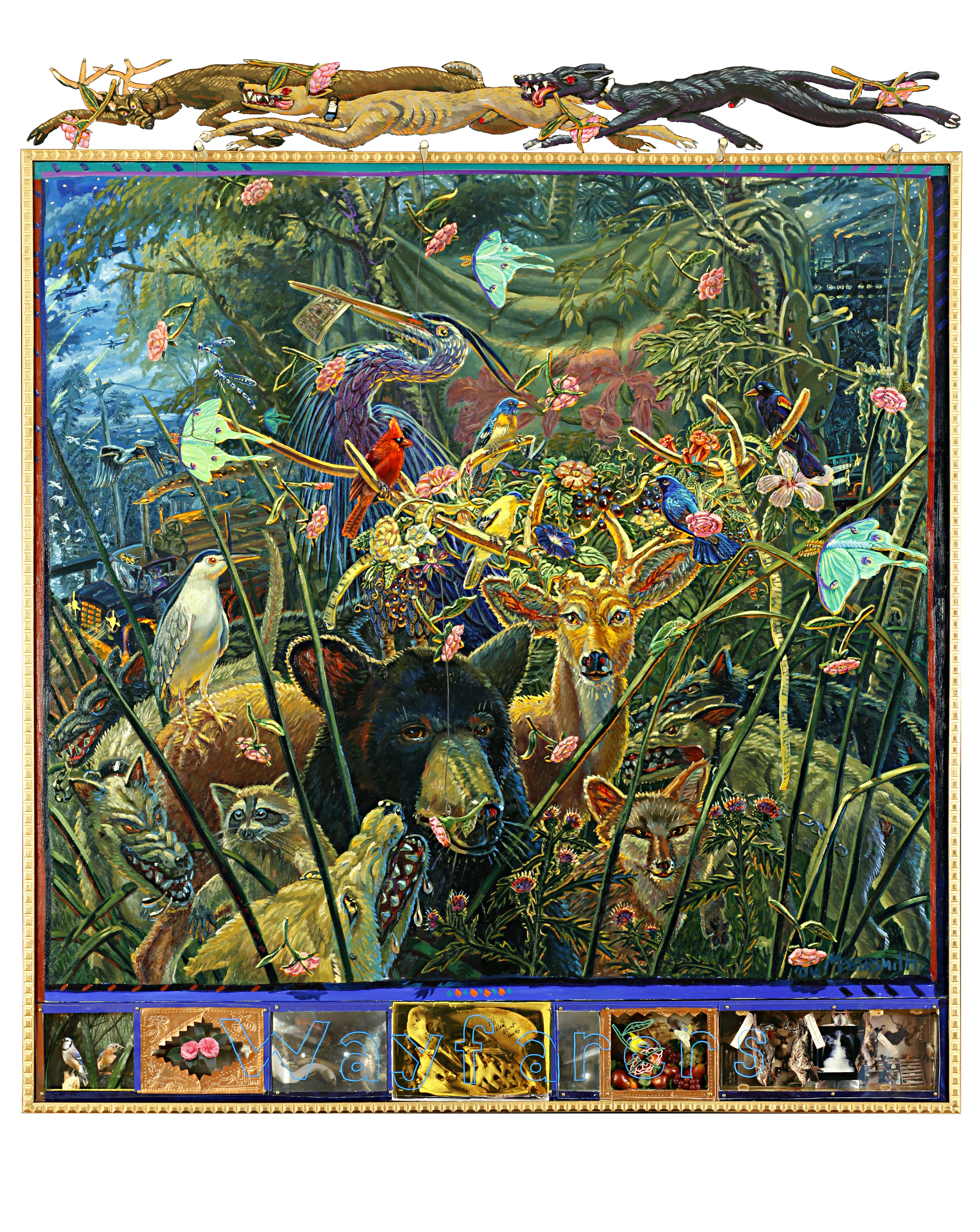 The show downstairs is the museum’s current main show. Menagerie  features works by artists from across the last century—many of them Texas-based. Given my thing for animals, I was of course charmed by a lot of it. But I was also often grasping for context and depth. It’s a massive subject and a messy one, given humankind’s fraught relationship to the animal kingdom. Many of the artists were represented by one work, or perhaps a few works not always hanging near each other, and for the names I didn’t know I had a hard time sussing out the artists’ reason for landing on a bear or a horse or a snake as subject. Is this something they did often? Is it totemistic for them, or political, or humorous, or allegorical, or melancholy, or sentimental, or short-hand convenient for “insert emotional and visual texture here”? Of course, this is a risk for any sweeping group exhibition dealing with a big theme. Which of the artists really have a dog in this particular fight? 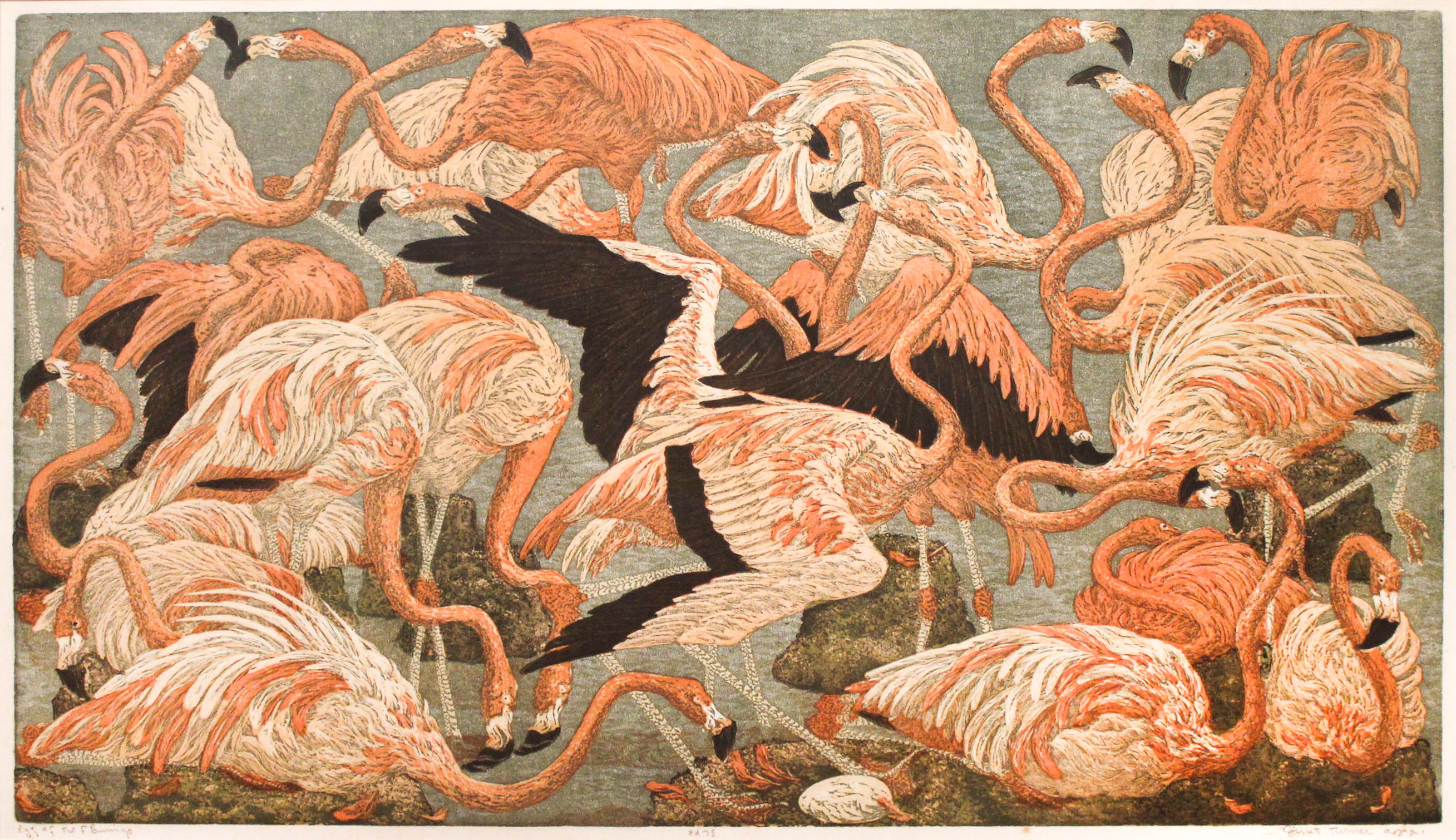 But with Turner upstairs, all the skepticism and pin-balling around settled into a familiar and knowable rhythm. Turner was a (sometimes Texas-based) master printmaker and an environmentalist whose prime was in the middle of the last century. She clearly knew her way around a serigraph, a linocut, an engraving, and the waves and sheen of a goose or guinea fowl’s feathers. She was as consistent as the tides. And now I know her work. 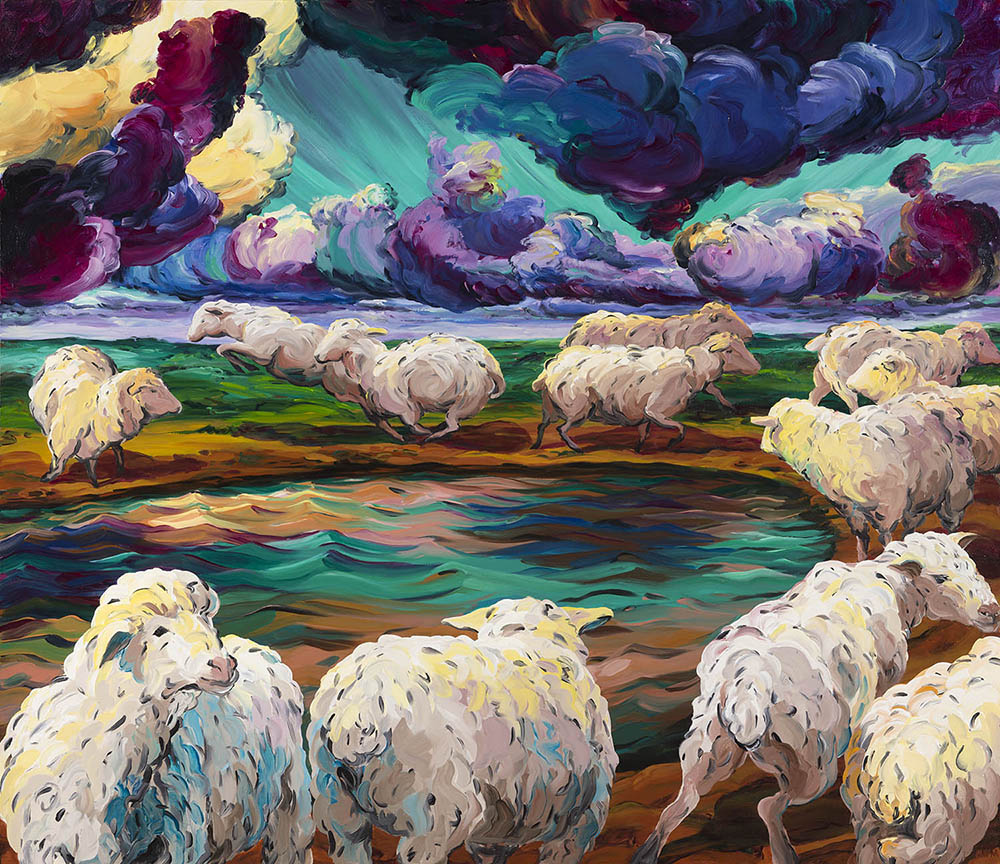 By the way: The Grace is worth a visit. And I’m not knocking Menagerie. It’s a good way to see a impressive range of works by Texas and Texan-born artists: Helen Altman, Melissa Miller, David Bates, John Alexander, Linda Ridgway… the list goes on. And there a couple of stunning J.J. Audubon prints of huge undulating birds—an owl and a swan—that are so gorgeous they make your throat close up.

But I think in this age of information static—and I don’t know how you all approach it, but I’m a constant and sloppy multi-tasker—there’s something meditative about settling into a room full of one artist’s works. There’s a center to it. There’s a singular viewpoint and personality, and there’s time and (head)space to familiarize yourself with that person. This really goes without saying and yet right now, in a time of art fairs and social media, et. al., this feels like a luxury. 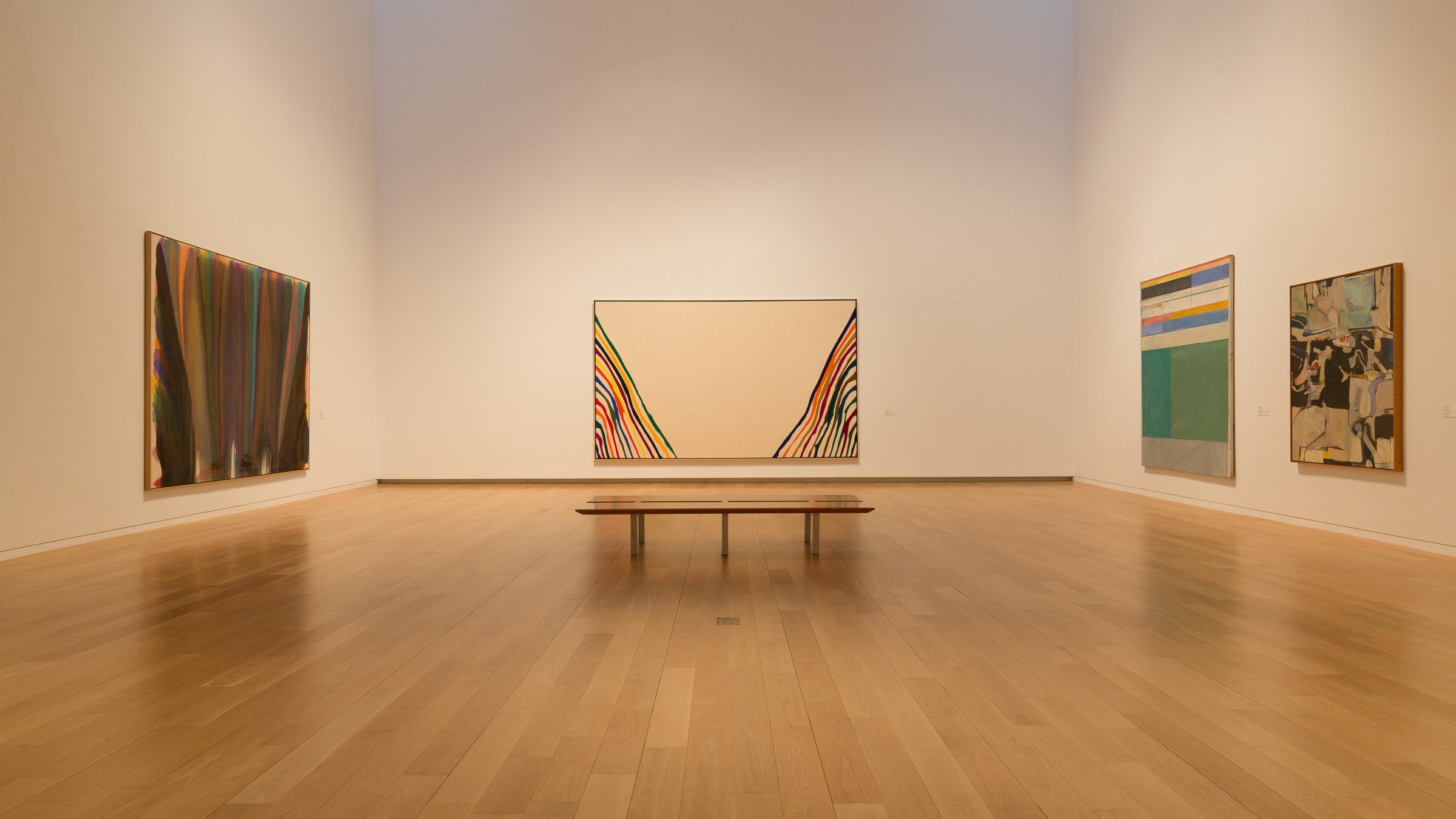 On that note: the Modern Art Museum of Fort Worth has a way with inserting small solo shows within bigger permanent collection installations. It’s always great, and sometimes surprising. The last few times I walked through the museum, I found myself stopping for a long time in the big gallery that often holds one Morris Louis painting (the one; the one we all know) among other 20th-century touchstones. Right now that big room is chockablock with a handful of Louis’ works—maybe five or six others. They’re up on nearly every wall, along with works by his peers. It’s a stealth solo show injected into a group show. I love it. I’ve actually never seen a whole posse of Louises before. It makes me like him and his work more than I did before—I got to know him a bit, with him contextualizing himself. 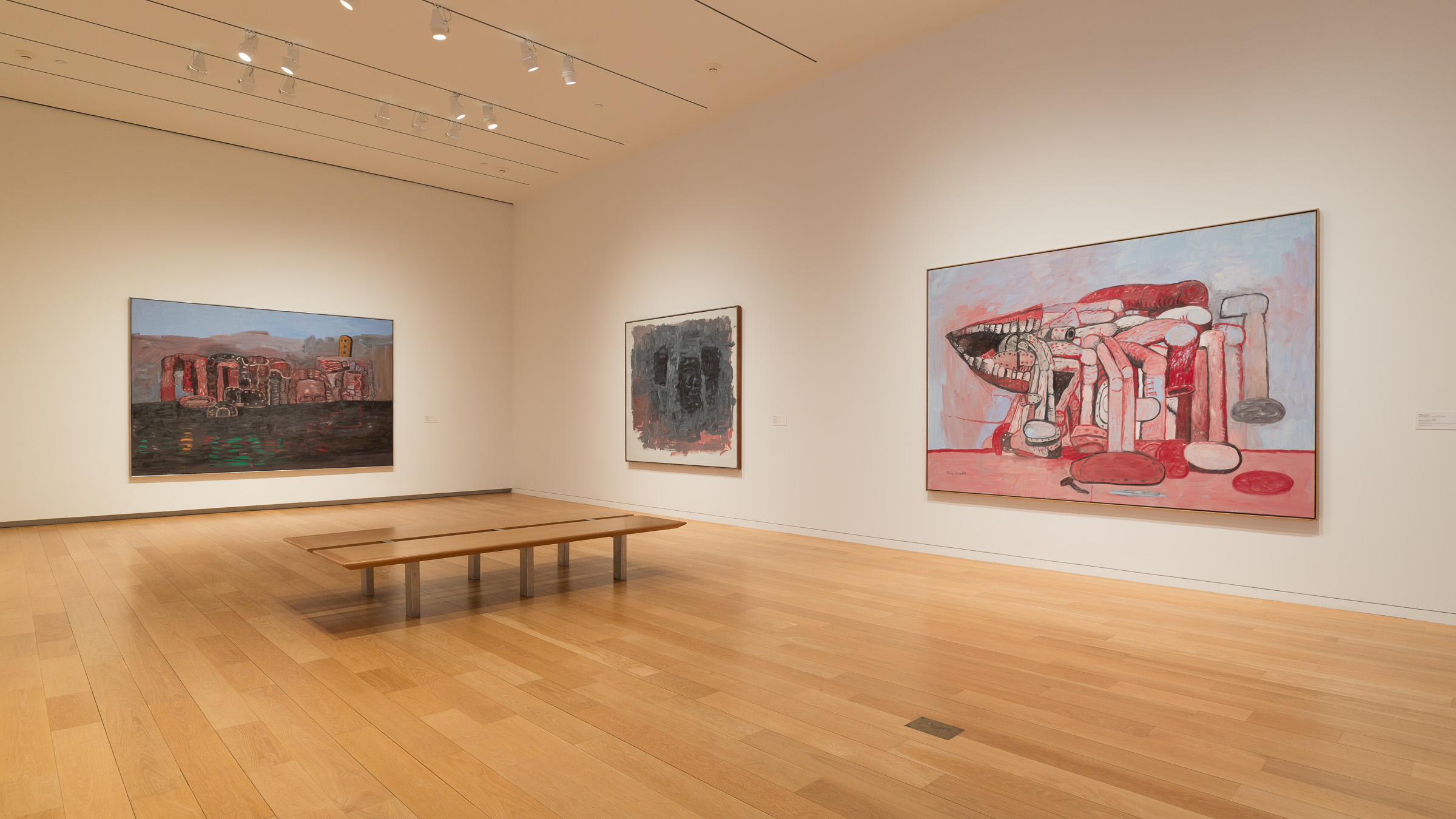 Philip Guston at the Modern in Fort Worth

Not to mention a current Philip Guston room, which is part of the same permanent installation hang. There are seven or eight of Guston’s nails-shoes-and-knees paintings up in a small gallery off to one side. Because the display is compact and  unnecessary, it’s like walking into an extravagant little section of Guston’s brain. Where else in Texas, or even the U.S., are you going to have that experience right now? The Modern’s curator Michael Auping has always known how to play up the museum’s strengths in this way. 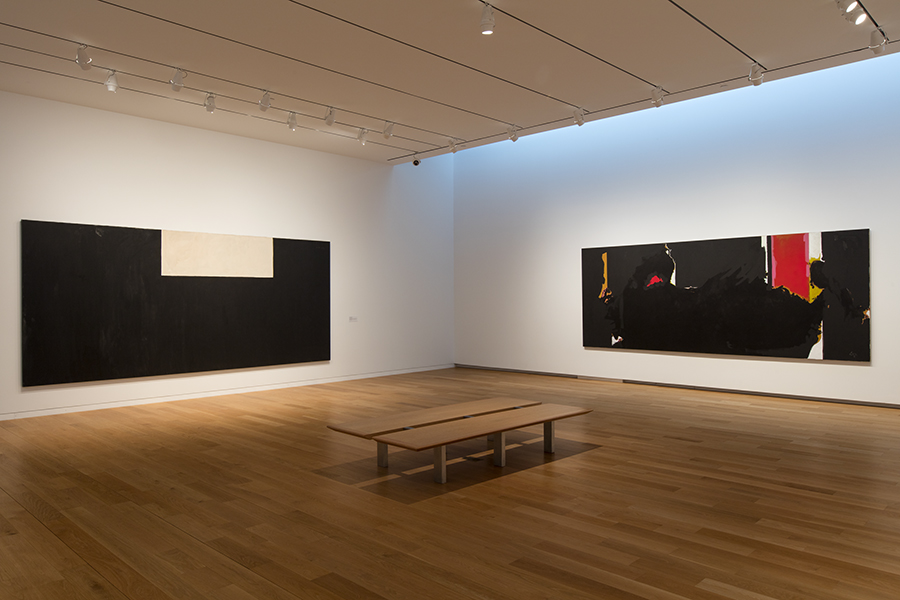 Motherwell at the Modern in Fort Worth 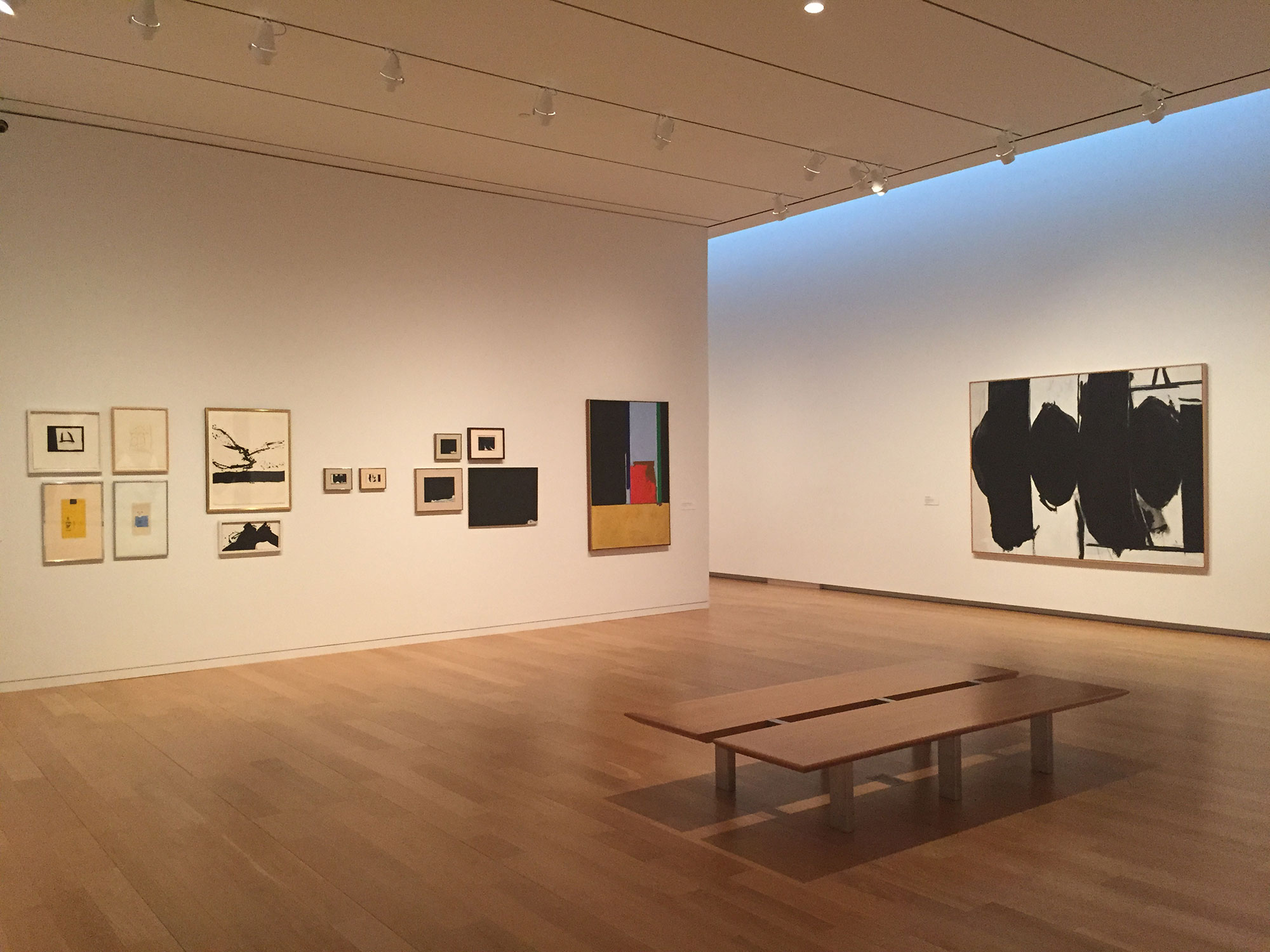 The Sean Scully room (ugh, don’t ask) is incredible real-estate at the Modern—great proportions, great lighting—and every once in a while the Scullys take a short vacation and some other artist’s work gets to set up camp there. Right now it’s all Motherwell, which is never a total surprise at the Modern considering its considerable holding of Motherwells. But old Uncle Bob’s paintings, collages and works on paper look fresh and muscular and surprisingly dynamic all over again in that space, with strength in numbers. I know most good museums play around with putting clusters of works up by one artist. It’s not new. But it’s as reassuring and shaping of one’s art experience as the rests are in music. It’s a way of keeping crowds of artists from coming off as just a lot of noise.