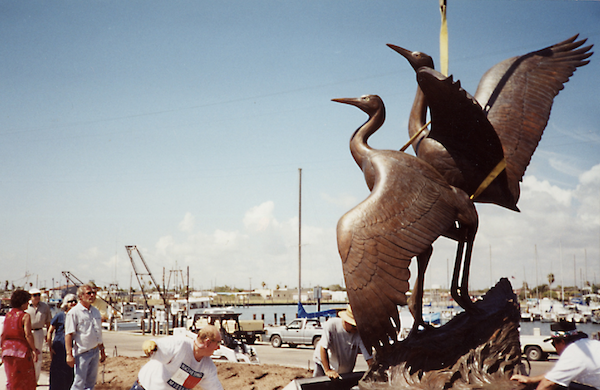 Installation of Rites of Spring, 2000. Image courtesy Rockport Center for the Arts

The small coastal town of Rockport, Texas has a population of roughly 10,000 (although it increases when the northern “snowbirds” arrive), so it is quite remarkable that the city is home to a very impressive sculpture garden. The Rockport Center for the Arts (RCA) inaugurated the garden in September 2000 when its first permanent sculpture, a monumental work by Kent Ullberg entitled Rites of Spring, was dedicated.

RCA’s sculpture garden has surpassed its original goal of installing ten large works, including one by James Surls, Charles Umlauf, and three by Jesus Bautista Moroles, who called Rockport home until his untimely death in 2015. Ullberg’s sculpture is also joined in the garden by several other representational works. 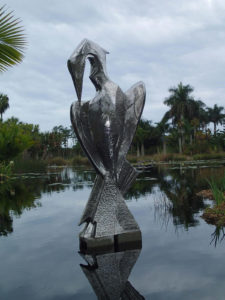 The RCA sculpture garden has now come full circle and unveiled its second sculpture by Ullberg, a five-foot monument, Preening Heron, cast in stainless steel, which resides between Aransas Bay and Rockport Harbor. (For Rockport residents: the site will also be landscaped by Rockport’s very own ”Native Dave.”) RCA Director Luis Purón states, “The piece is part of Ullberg’s Evolution Series, which demonstrates his versatility as an artist and his eventual transition from abstraction to realism.”

Ullberg likens this transition to his monumental bas-relief triptych Evolution, three bronze panels, which literally depict his evolution of style, commissioned by the Art Museum of South Texas and were installed in November of 1992. As Ullberg explains, “As a naturalist [and major supporter of many wildlife conservation efforts], I’m very interested in evolution.” He let that sentence hang in the air for a moment to make sure it was understood that he meant scientific evolution, personal evolution, and artistic evolution. 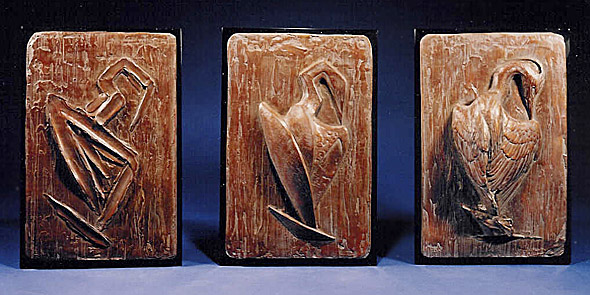 How did this young man from a small Swedish fishing town end up in Padre Island? Although Ullberg and his wife Veerle have been in the Corpus Christi area for almost 40 years, it was quite the journey to get there. Ullberg’s parents were both artists and he often tagged along to art classes and plein-air painting outings, but he was more interested in the weird, fascinating world of nature and animals. At the age of 18, Ullberg enrolled in Stockholm’s Konstfack University College of Arts and, as it was still during the heyday of Abstract Expressionism (at least for art-school teachers), a professor warned Ullberg he would never have a career doing representational sculpture.

In 1970, Ullberg told Southwest Art magazine, “I decided to do the next best thing; I apprenticed to become a taxidermist at the National Museum of Natural History.” That’s an ingenious way to learn how to sculpt animals when a prestigious art school is too discouraging. He then traveled to Germany, often crossing back and forth from East to West Berlin, to continue his study of taxidermy and hone his skills in animal anatomy. In 1967, he was offered a job in Botswana to help build and run the National Museum and Art Gallery. “As a naturalist, an avid sculptor, and a taxidermist, I dreamt of Africa like a maniac,” he says. “I had read Isak Dinesen and Hemingway, and I jumped at the chance.” He lived there for seven years. He later moved to Colorado to become a curator at the Denver Museum of Nature and Science. Ullberg is a member of numerous notable art organizations that have honored him with many prestigious awards. In 1990, his peers at the National Academy of Design elected him a full Academician, thus making him the first wildlife artist since John James Audubon to receive one of the greatest tributes in American art. 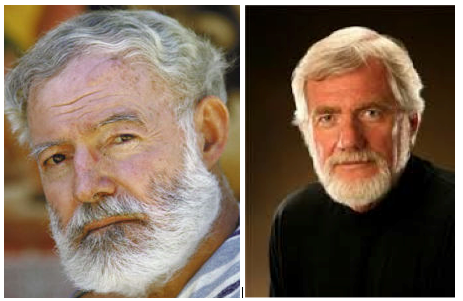 Ullberg is best known for the monumental works he has executed for museums and municipalities from Stockholm, Sweden, to Cape Town, South Africa. According to Trailside Galleries, his Fort Lauderdale, Florida and Omaha, Nebraska installations are the largest wildlife bronze compositions ever done, spanning several city blocks. Ullberg’s work has been shown and can be found in major museums and corporate headquarters around the globe, including the National Museum of Natural History in Stockholm, Sweden; the Salon d’Automne, Paris, France; the National Gallery in Botswana, Africa; the National Geographic Society, Washington, DC; the Exhibition Hall, Beijing, China; the Guildhall, London, UK; and numerous museums in the United States.

Along the way, Ullberg was on an artist’s jury judging sculpture and awarded Rockport’s Jesus Moroles a prize. They became friends and Moroles began exhorting the virtues of South Texas fishing towns. Ullberg eventually fell in love with Padre Island and moved. (“Yes,” he says, “I raised sons in Padre; I know about the craziness of Spring Break.”)

Presently, the Coastal Bend area is host to 18 monuments by Ullberg. His sculptures are part of corporate, public, and private collections across the globe. In May of this year, the Millesgården Museum in Stockholm, Sweden, where he spent his formative years as an art student, will be host to a retrospective exhibition. Ullberg says he’s “scared to death.” These are the people who told him “he would never have a career doing representational sculpture.” But Ullberg is still going strong, as busy as ever, and we’re sure that the Swedish art world will welcome him with open arms.

As to the new Rockport sculpture, RCA Director Purón says, “In my short tenure, I have had the enormous pleasure of working with Ullberg and two generous families, the Herrings and the Guinns, to procure this second sculpture from the Swedish master.” Ullberg is happy to be back in Rockport, working with people who love his sculptures and love the history of the area. Rockportians enjoy art, fishing, birding, and a good story. RCA Director Purón joins in the love: “Ullberg is worldly, extremely talented, a consummate perfectionist, and the best raconteur I have ever met.” 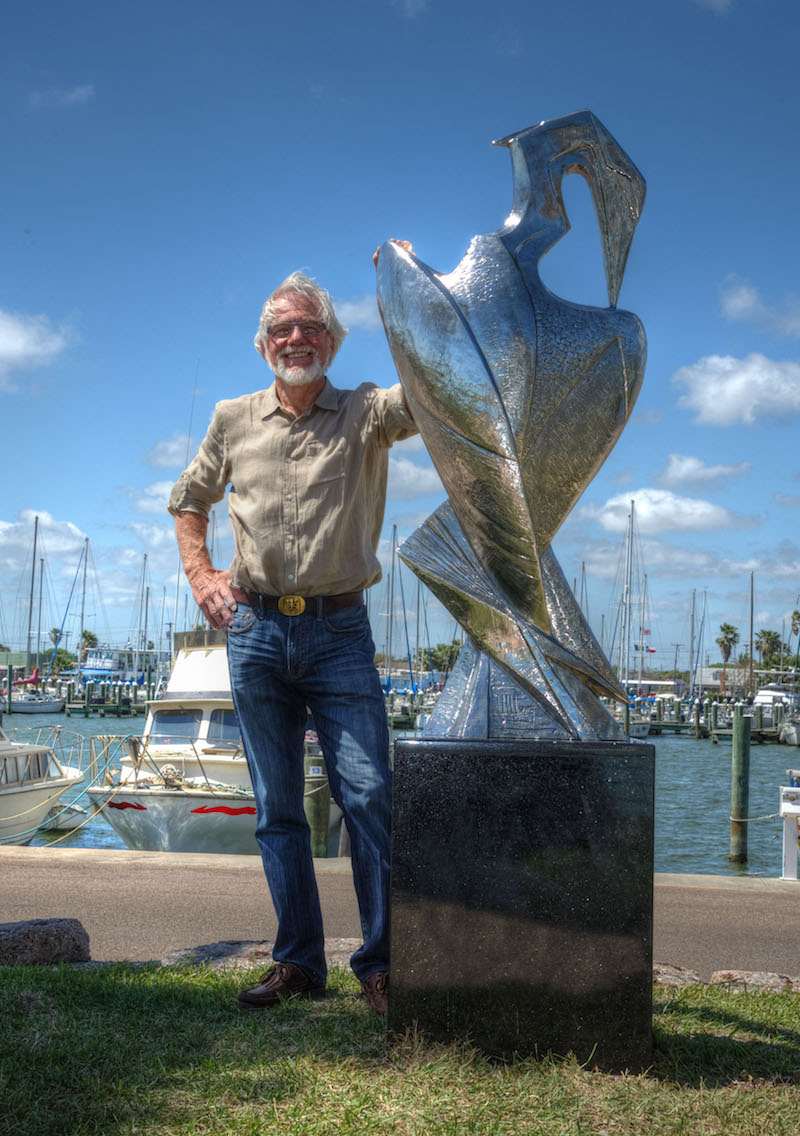 Kent Ullberg at the installation of Preening Heron in front of the Rockport Marina, March 20, 2017. Photo credit: Pamela Fulcher

This and That: Lizabeth Rossof and Joshua Goode