Robert Lansden draws small, repetitive marks that link into larger pictures that look like strange fabrics, blooms, and topographical data. Lansden bases each picture on an algorithm, and the marks are typically triangles or rectangles that the artist makes with pen, gouache, or watercolor. The rules of his algorithm make for an operation that is not wholly deterministic. That is to say, the algorithm allows for variance in the output—variance that results in the illusion of gashes, folds, peaks, and vales. 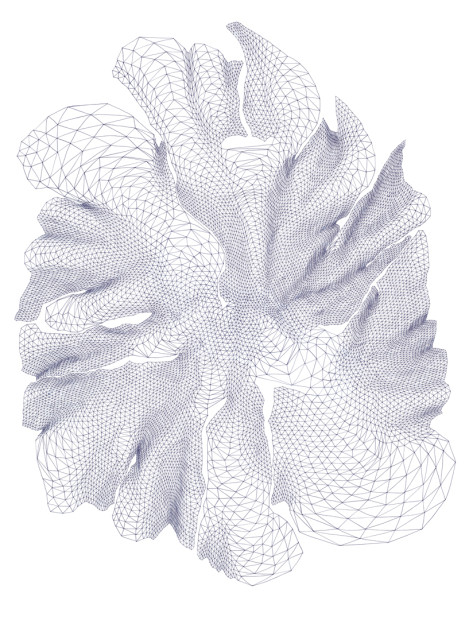 The pictures in Metamorphosis, Lansden’s show at Cris Worley Fine Arts in Dallas, evoke a compelling sense of mystery: if these are fabrics, they are somehow animated; if blooms, they grow out of the imagination; if maps, the locations are fantasy. There’s also an alluring tension between balance and imbalance: one wonders which side will win out. 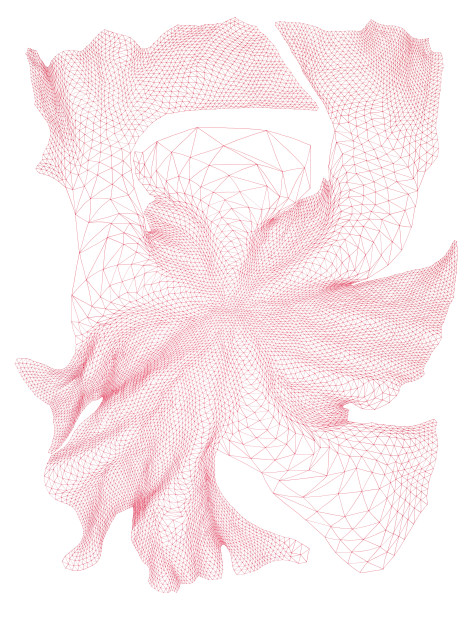 Lansden’s interest follows a course of disciplined procedure into natural mutation and evolution. His title calls to mind Ovid’s poem, Metamorphoses (the distinction is plural), but Lansden isn’t reaching for the delirium and subversive power that radiates out of Ovid. There are, however, some of Lansden’s  drawings that call to mind a bit of that Ovidian fire: Let It All Go By #1; Let It All Go By #2; and Coming Down. 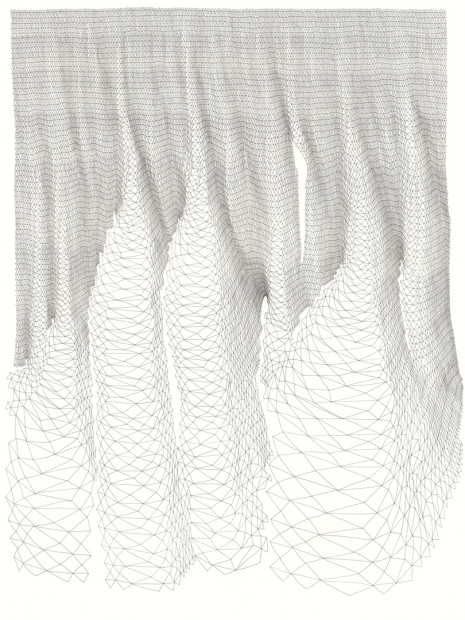 Lansden follows the mutations that come out of his algorithms, mark after mark, moving his body around the paper to follow the emerging course. It is a process that reveals an increased purposefulness. Mutation, rather than presenting a problem of decay, is instead responsible for the vital becoming of the picture. The process is quite at odds with views that equate evolution with entropy, the winding down and loss of energy that are supposed to accompany the aging process of the universe. Mutation in Lansden’s Metamorphosis enlarges the vitality of his systematic process. In this way, Lansden finds an interesting point of contact with Ovid’s Metamorphoses, a poem grasping to apprehend how order emerges from disorder, complexity and purpose from chaos. Metamorphosis is not an action of loss, but rather a process of possibility. 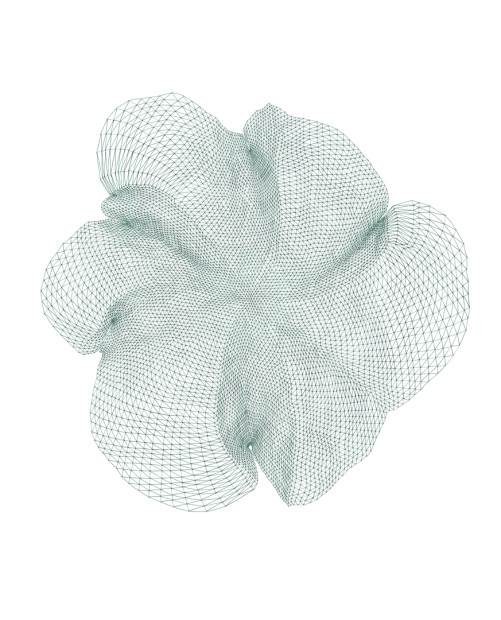 Light Through The Leaves

Mathematics has a long historical relationship with art, but the process generally known as “algorithmic art” has only been in practice, as far as I can tell, since the early 1960s, when digital technology began falling more readily into the hands of artists. Algorithmic art is typically a way in which artists explore computer-robot communication and information sorting, in which case the artwork itself is a computer graphic. Pioneers in the form include Manfred Mohr and Vera Molnar. 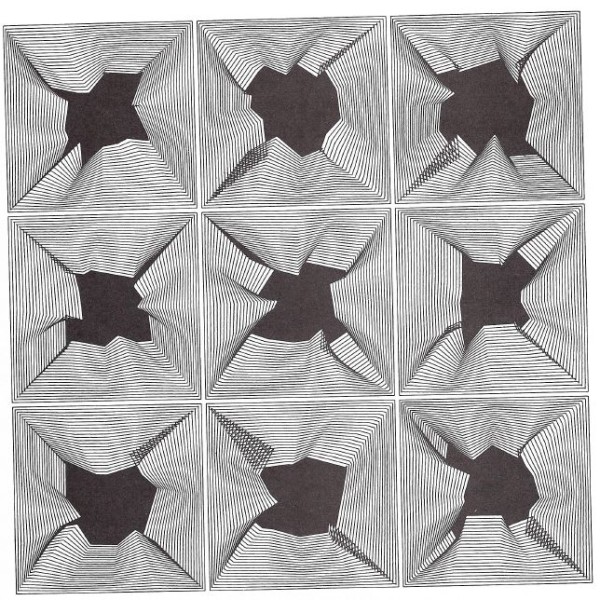 Lansden recapitulates the tradition by leaving out the computer. He runs the algorithm in his head and makes the marks by hand. The variation and selection that occurs within the algorithmic system is entirely organic. 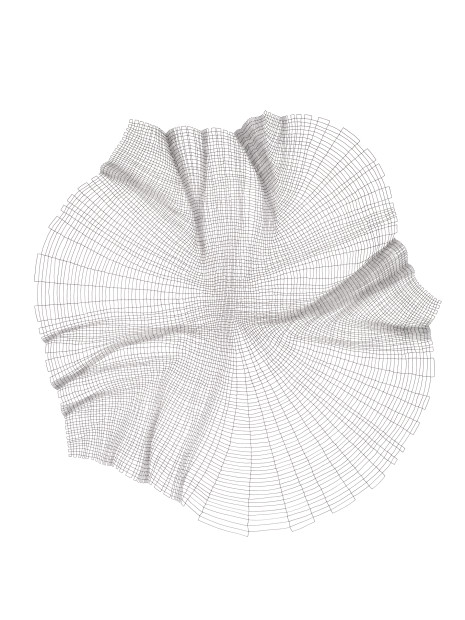 The Shape of Time

I suspect that Lansden’s reliance upon his own sensori-motor capabilities rather than computer-robot communications for his work in Metamorphosis is a comment on digital society, which is dominated by computer algorithms. It hardly bears reminding that all our online shopping experiences are governed by computer algorithms. Same with our investment systems.  If you have a 401(k), your retirement hopes are batched with investments chosen by algorithms. Should mutations in these sorts of algorithms go uncorrected, we’d quickly reach a point of global freak-out. Lansden, it seems, is taking a step back from this accelerated digital system. The mutations in his procedures are explored calmly and are registered by his own hand. His method could be described as a form of Self-Reliance. 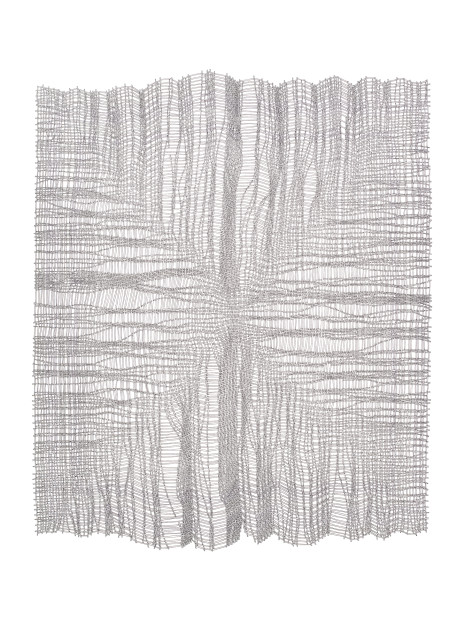 Caught in a Dream

The pleasure of looking at the variety of folds or blooms in Lansden’s pictures is accompanied by tension for the chaos that created them and the divergences sprouting out of the algorithms.  My meditation on Light Through The Leaves was broken after a short moment, when my gaze slid down the funnel at the bottom of the picture and went down into that little void just between the unclaimed space at the lower edge and the bustle of algorithmic marks above it.

I confess it could be my own tense feelings about digital society that draws my focus to the tension between balance and imbalance in Lansden’s work. The digital age seems to have sprung up fully formed for the speed of its many conveniences, but it will be a long time coming before we understand what it means in terms of sustainable employment. We were one hundred years into the industrial age before the economy and social life fell into a pattern we could call “adjusted.” For my part, I’ve been through two large-scale layoffs, in different industries, since 2007. Both times I was told the numbers in the new economy didn’t support the programs that employed me. I’m hardly unique in this; there are plenty of middle-aged people like me adjusting to the idea that two to five years at a job is the new normal. By temperament, I’m optimistic. I see evolution as a creative, vital, ever-becoming process rather than an inexorable winding down. But as far as where I’m at today, struggling in the digital economy, the furling and unfurling qualities in Lansden’s pictures like Let It All Go By #1 and #2 make for vivid descriptions of the sorts of psychic terrain I’m navigating as I bend course and morph to make myself relevant in the new age.