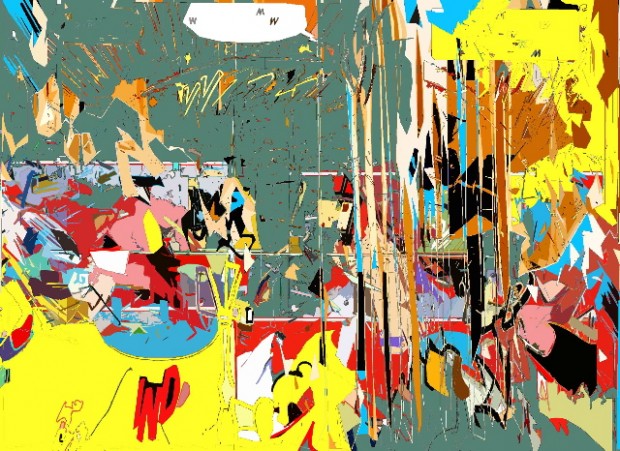 The beauty of a gallery like Cris Worley Fine Arts is its invitation to view all of the art at once. The space itself requests your slow study over the panorama of work on its walls before you approach any single work (though one painting does greet you at the door). That’s a great stage for a real show. Stand in any corner and you can work out  playful relationships between individual works. The lucky artist in the current exhibition is Ruben Nieto, and the combination of this space with his new paintings is an explosive but fortunate union. 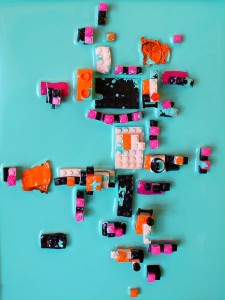 Full disclosure: Ruben is a pal from grad school days. My policy is not to blog about shows involving friends, but when I saw an image of just one of these paintings on a Facebook invitation, I had to go, I had to blog, and I had to have images of Ruben’s work from just three years ago. 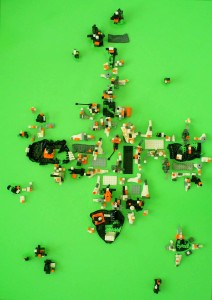 In 2008, Ruben was making large-format painting/sculpture hybrids by melting Legosonto canvases, then through some secret alchemy that he would not divulge, giving the whole piece a shiny patina that looked like patent leather. The works looked like funky topographical maps with Legos as buildings and while they were fun, I felt like Ruben was a little bit stuck — each critique day brought a different color but the same result. I brought this up once while standing in his campus studio space looking at art in various stages of being Rubenized, and he answered haughtily, “It’s a series.” Once he brought in an experiment – the same process done on baking pans. I loved them. The smaller size made the Legos look like they were jumping off the baking pan into freedom, but Ruben hated them and abandoned the format immediately. During that entire semester, he was the only person to show us his self-perceived failure. I remember him saying simply, “This, I don’t like it.” 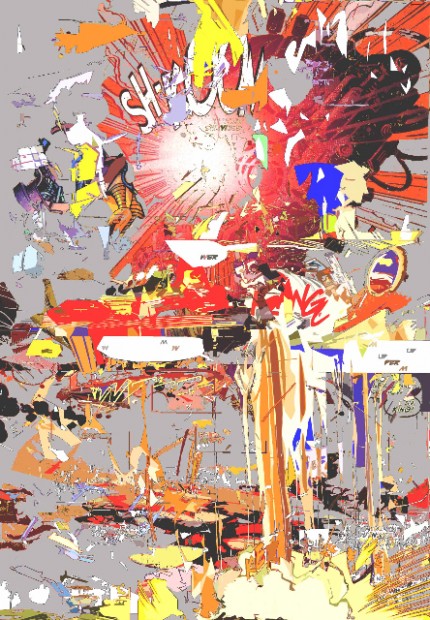 I'll get you, you scwewy Twombly!

With SHAZAM!, he gives each work a distinct personality while sticking to his belief in the series. Ruben terms their commonality “comic abstraction,” but there is a shared violence among them, too. Think of shredded pages from action hero comics turning to glass shards on impact then hurtling straight for your head. But one painting goes larger on size than its siblings while using a blander background, causing a bigger, louder contrast with detail (that’s my favorite); another has a lot of negative space at the top, sectioned off by a yellow line under which a cloud emerges – a landscape typology denying about 20 percent of its available canvas space. Weird. Another has the phrase “I AM KING!” left intact and I laughed out loud. 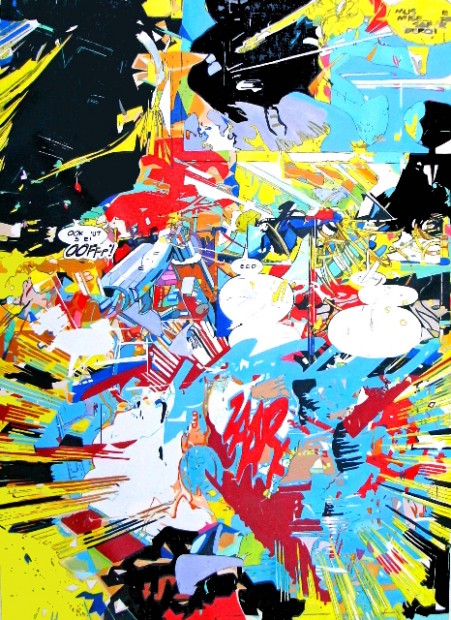 The sculptural element is gone, and so is my onlooker boredom.

Ruben has had a bunch of group shows and one solo exhibition in the past three years, but being a bad friend, I did not see them. Instead I got to say bon voyage at the departure of a creative pilgrimage, then welcome home an artist transformed.

Betsy Lewis is a writer who lives in Dallas and got an A in John Pomara‘s studio art class in the spring of 2008.