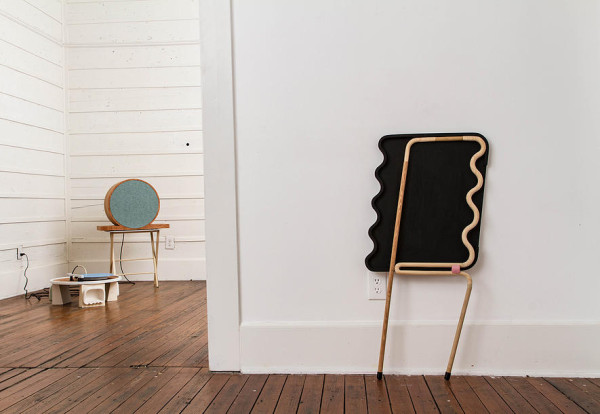 Brad Tucker identifies oyster shells as the main source for the formal motif of the sculptures in Decent Recent Pieces, his show at RE Gallery in Dallas—specifically a shell-shaped soap dish set into the shower in his house in Austin. Besides agreeing conceptually with water, the shell form is functional in a shower: the fluting channels excess water away from the soap so it can last longer. Tucker’s sculptural move is to invert the negative space of the shower wall cavity (his word) and produce a series of positive shapes like loosely interpreted Rachel Whitereads. A hole becomes a solid, or at least, determines the contours of the solid. 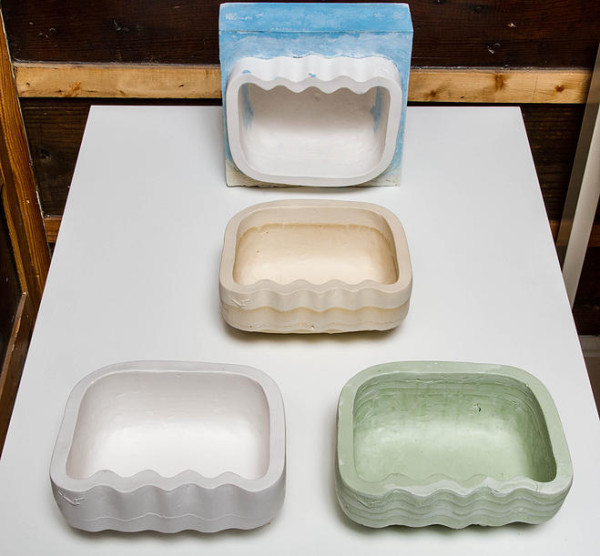 I first saw Tucker’s work at Angstrom Gallery some years back. There was this small shaped painting-like object in the form of a cartoon cloud, white with a band of black at the edge. It was loopy, post-minimal, and endearing. It was a Bob Ross joke that knew all about the Chinati Foundation. It was mysteriously complete in itself. 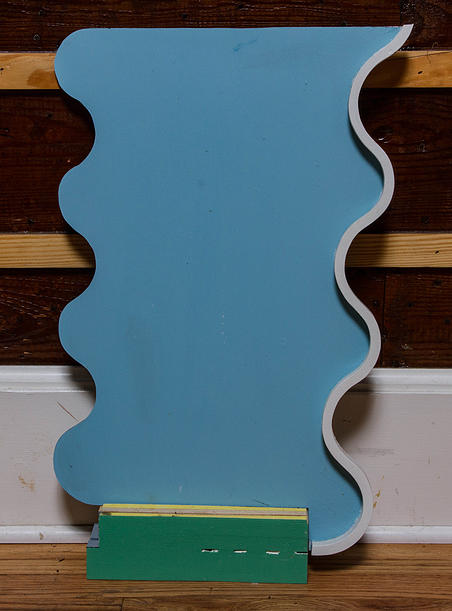 I saw an early Donald Judd painting once while touring one of his Marfa studios. It was a crazy little thing: he’d framed the edges of a piece of chicken-wire-reinforced glass with a wide band of the sort of muddy red I used to inadvertently mix before I knew how to paint. With its unpainted center, wired and transparent, the work loosely resembled a football field and track. Tucker’s cloud at Angstrom was its cousin, and so are the sculptures in the current show. Their post-minimal forms echo Judd’s pre-minimal piece. (Whether or not this implies a time warp, I can’t say.) 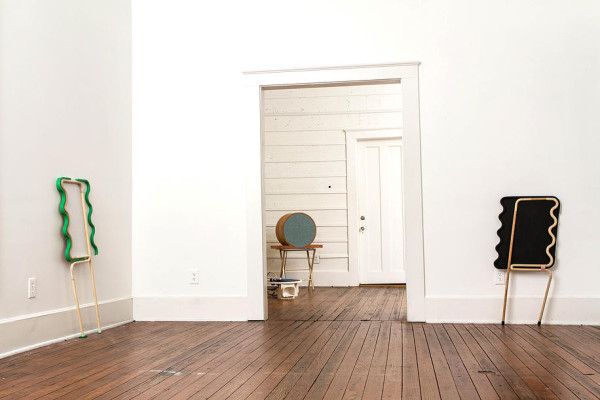 Smooth Jazz (all works are from 2015) is something of a malformed TV tray with a pair of wavy bands of wood painted green on either side of, and defining, a white panel. It leans against the wall uncertainly, one of its mismatched legs propped up with a bit of plastic. A passage of the cylindrical wood Tucker pieced together for the sculpture’s legs nestles into the undulating green band on the left side, while the leg opposite descends without incident. Both legs are capped with rubber feet.

Tucker melds shell-derived curves with failed TV tray designs in other sculpture in the show. The rubber feet, the casual domestic vernacular, the sad little plastic shims all invite a reconsideration of the functionality of his original form. They don’t work, but they might with a little jiggering, a bit of bricolage. 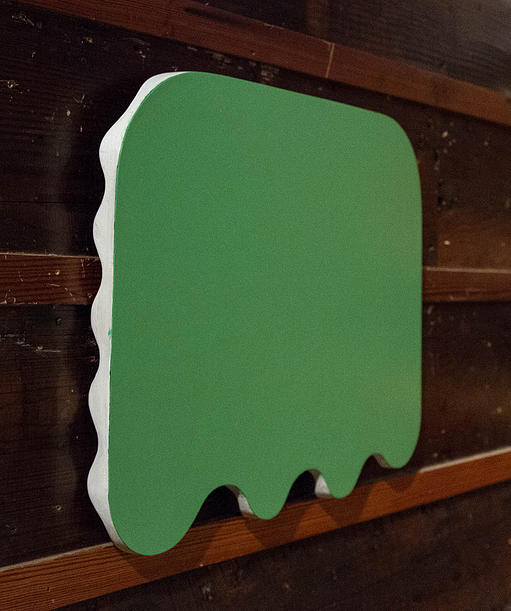 It’s likely a matter of taste or a personal fondness for Jean Arp’s shallow wooden relief sculptures, but I prefer Tucker’s wall-mounted reliefs like Green Ghost, an elegant little piece that complicates the title’s reference to Pac-Man villains by echoing the undulations on the sculpture’s bottom across its backside—a smart assertion of the material three-dimensionality of what at first glance seems to be a flat plane. Footer, another relief, bears a green squiggle on top while a pale wave form in casually brushed white paint and another wave hidden on the back visually rhyme with it. 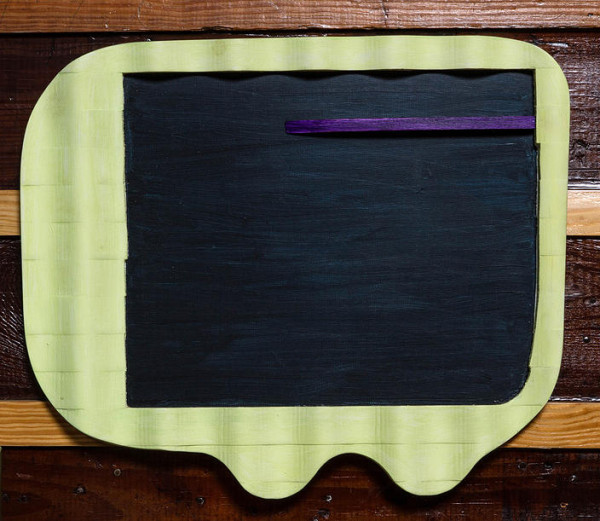 The easy-going, somewhat brushy paint assumes a physical form in 3D TV where Tucker cobbled a number of bits of wood into a wavy green frame around a flat black “screen” which sports a purple band. The piece would look right at home on the set of Pee-wee’s Playhouse. Once again the curvy shell motif moves in three dimensions, but this time the sculpture has been built of laminations that are slightly off register. 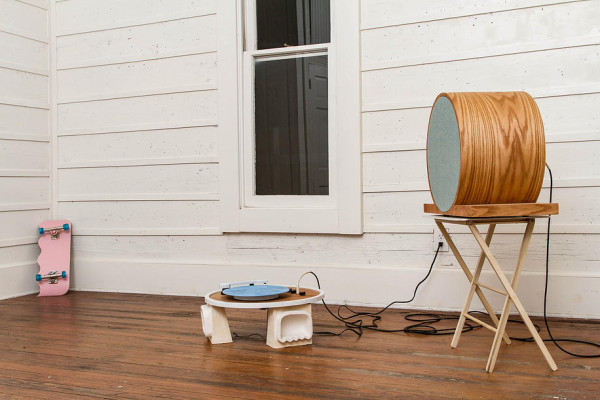 Propped in a corner, Curves gives the shell treatment to a pink skateboard. Made of wood, pewter, and plastic, it sports wheels of cast soap. Reportedly Tucker’s family used the soap for a time before he attached the wheels to the piece, which means it both represents a functional object and contains parts which were useful in his house before they became sculptural. More utilitarian still, Spare Changes, a handmade working record player, squats nearby atop a trio of cast soap dishes. Here his craftsmanship ratchets up a ways. The woodwork is clean and shows great skill, but the record it plays (also titled Spare Changes) is quite a wobbly affair. It was cast from a rubber mold of a 12-inch vinyl disk, and the imperfections of the process make the tone arm hop as it plays. But it does indeed play. 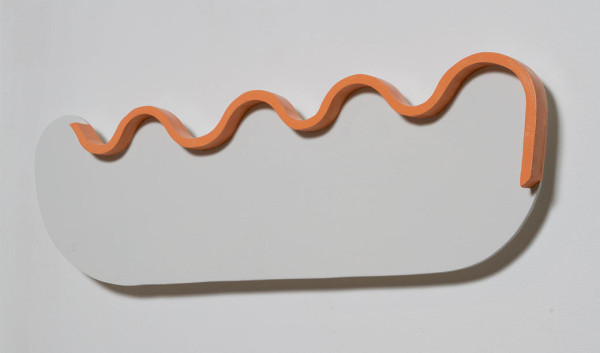 I have resisted until now the word ‘scallop’ in describing these sculptures because the artist makes specific reference to oysters. But most varieties of oyster shell do not have the shape Tucker riffs on in this show. Some clams do, but the common expression for the shapes he uses is scallop. This brings up some interesting iconographic connotations. The scallop shell is a traditional sign of pilgrimage. It appears on the vest of St. Cleopas in Caravaggio’s Supper at Emmaus. I’ve read that pilgrims on the road to the cathedral of Santiago de Compostela in Spain once carried scallop shells as a sign of their pilgrimage and to be used when begging alms along the way. They were permitted only as much as fit in their shells from each donor.

I do not ascribe any religious intention to Tucker or his sculptures, of course. The iconography is there, all the same. And since I once taught art at Saint Mary-of-the-Woods College and since there is a 19th century chapel on that campus devoted to Saint Anne which is filled with shells, I had to mention it.

Perhaps a more appropriate reference would be to 18th century French Rococo artists and designers who made frequent use of shells as they reacted against the rigors of Baroque art and manners. In Tucker’s casual informality and (I believe) good cheer, there may be something of a parallel to the spirit of, say, Watteau’s L’Indifférent, the indifferent one. It is possible to make good art and remain relaxed while doing it.

Brad Tucker is on view at RE Gallery in Dallas through Nov. 14. Images courtesy of the gallery.

I thought, “Odom left out Botticelli’s Birth of Venus!” but I checked and she’s standing on something more mollusk than scallop, and definitely suggestive of the female (emphasis on the birth) rather than pilgrimage. Those lusty Rococo artists were probably on Botticelli’s level too.

I can hear Brad Tucker shaking his head…

Not at all Rainey. I very much like the associations with Rococo frivolity that Michael Odom makes. I’ve thought similar things myself, but this is the first time I’ve seen anyone make that connection in writing.

<sound of scales falling from my eyes>

Love this work. And I felt someone needed to make the formal connection between these works and the works of Stuart Davis, one of the most influential American artists of the first half of the 20th century. I’d be surprised if Tucker didn’t intend the formal reference. Stuart Davis made a number of pieces that abstracted the form of an egg beater for both formal experimentation and as a way to ponder the philosophical metaphors an egg beater implies.