Baggage: “Shoppers” for a Conversational Feast at RE Gallery

Baggage: Works by Michael Corris + Kelly Kroener w/participation by Travis LaMothe at RE gallery + studio in Dallas is a richly suggestive as well as visually appealing show. As you walk into the gallery, you’re presented with a tasteful installation of colorful, “shopper”-shaped vinyl bags, mostly hung on the walls from specially-made wooden brackets, together with drawings, small “charms,” and two framed texts. The bags are hung relatively high, so their bottoms can be viewed. Two are hung in vitrines with mirrored floors; texts on the bag bottoms are reversed so as to be legible in the mirror. 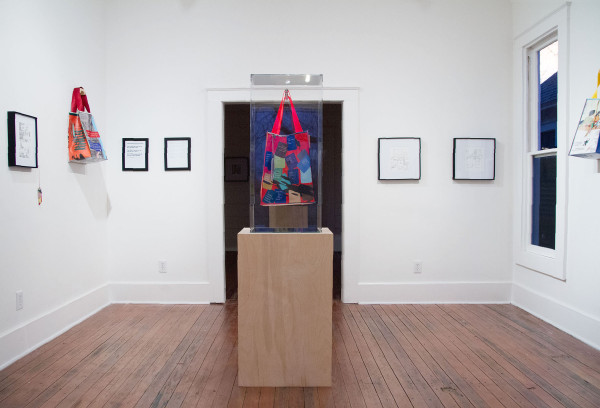 The show grows out of a project Corris created for the Texas Biennial at Ballroom Marfa in 2012, titled Open Studio: Every Person is a Special Kind of Artist, with Baggage, in which he invited Southern Methodist University students Southern Methodist University students, Willie Binnie, Travis LaMothe, and Melissa Tran, together with two other artists, Kelly Kroener and Michael A. Morris to join in creating an “art system” comprised of a limited edition of 50 bags and a video of “student interviews and candid scenes of the creation of the work.” In the prior show, the images printed on the vinyl used for the bags were designed by the students; in this exhibition, the images were designed by Corris. 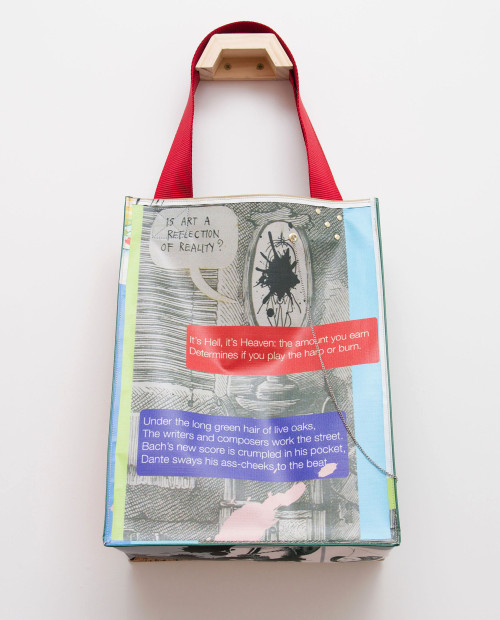 Kroener sewed the bags and created “charms” from scraps of the same vinyl, miscellaneous jewelry chains, and other odds and ends. Most or all of the bags incorporated a charm attached in one way or another, and some but not all of the drawings also had associated charms hung near them. Carrying forward a grocery shopper/food-for-the-soul theme, Kroener refers to the charms as “fashion snacks,” quoting a vogue for similar charms on women’s handbags, where they’re usually useless but add visual interest and sometimes involve a talismanic or cuteness factor.

The resemblance of the bags to “shoppers” raises questions such as who’s shopping, for what, what’s being shopped? I was also reminded of the bags sometimes handed out to VIPs at art fairs. Both the charms and the bags seem to serve multiple purposes, including making visible the ways of commerce and fashion (while both appreciating and getting an amiable poke in at them) and, perhaps, our basic human impulse to decorate ourselves and our world. 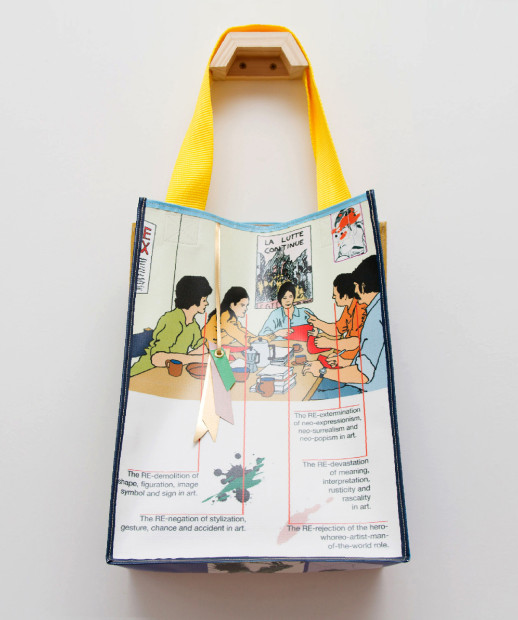 Travis LaMothe created the wooden brackets from which most of the bags were hung. The brackets, the bags, and everything else in the show are thoughtfully designed and beautifully fabricated.

The bags are empty, inviting us to fill them or consider what they might carry. But the images used on the vinyl offer content of their own: imagery from Corris’ research archive and his own past works, including logos from Corris’ Free Museum of Dallas project, references to Art & Language (the conceptual art group of which Corris was a member), laconic references to economic and/or political concerns, and images of groups of people conversing and/or working collectively (in one case under a sign reading, “la lutte continue,” French for “the fight continues” —the good fight?).

Some bags enumerate “NO” edicts, previously seen in Corris’ 2011 show at The Reading Room: “NO INFORMATION”; “NO HANDPAINTING”; “NO WRISTBANDS”; “NO CROSSING CULTURAL BOUNDARIES”; and one that worried me personally when I first read it in 2011, “NO HIGH PRODUCTION VALUES IN VIDEO.” Corris’ own works break many of these rules; I now suspect he hopes we’ll consider their futility as well as their utility.

Other bags incorporate “RE-” negations of various visual strategies in art, e.g., among others, “the RE-dissolution of line and edge, color and contrast . . . ”; “the RE-annihilation of scumble, spray and smear . . .”; “the RE-destruction of the vertical stripe and horizontal band . . . in art.”   (The “RE-s” may also reference the name of the gallery, which, I understand, refers to an interest of the owner, artist Wanda Dye, in ideas relating to recycling, repurposing and the like. Perhaps Corris is recognizing the utility both of rejecting various strategies in art, and of recycling or repurposing them, and of recycling/repurposing their rejection.)

Some of the drawings in the show echo images on the vinyl, but the drawings are black outlines on off-white paper, while the images on the bags are filled with color. Crucially, in the drawings, significant portions of the outlines are missing. The “incompleteness” of the drawings suggests ideas about the viewer’s role in completing a work of art through her/his acts of perception, interpretation, etc. 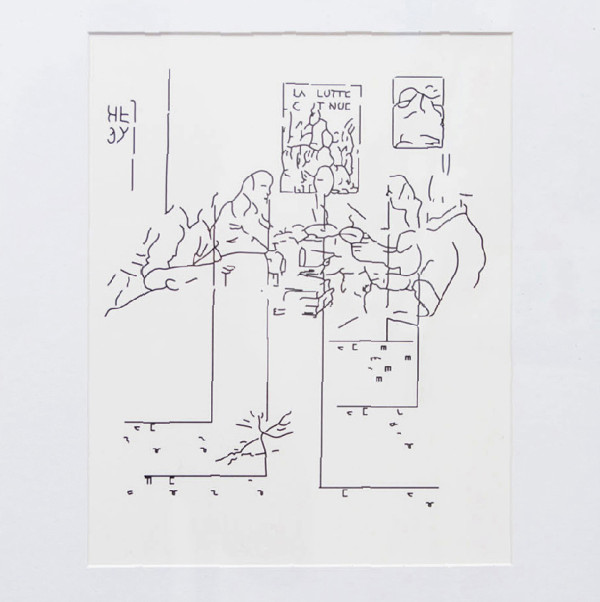 Two framed texts frame the show. The first, a revision by Corris of writings by George Orr, the “mad potter of Biloxi” reads:

“Real head-heart-hand-and-soul bags. When I found the bags, I felt it all over like a wild duck in water. These bags are here and I am the artist who was –– 2013. Get a RE Gallery souvenir before the artists die or get a reputation.”

The second framed text is identical except that it reads as artists speaking in the plural. Corris’ recycling of Orr’s words inducts the potter into a new collaboration; the repetition of the text in the plural suggests a movement from the individual toward the collective.

The show presents a continuum of collaboration in both form and content. Corris’ first wall text speaks in the singular and some drawings lack associated charms; other drawings have charms but are not physically incorporated; and, finally, some of the bags are fully collaborative—they bear Corris’s images, incorporate Kroener’s charms, and they’re hung from LaMothe’s hooks.

This show carries forward the generosity and community spirit of the earlier project for the Texas Biennial. Not only does the whole seem greater than the sum of its parts, but the continuum it presents seems to unpack things further for us—that the more collaborative and fully-integrated the works are, the more they can, literally, carry. 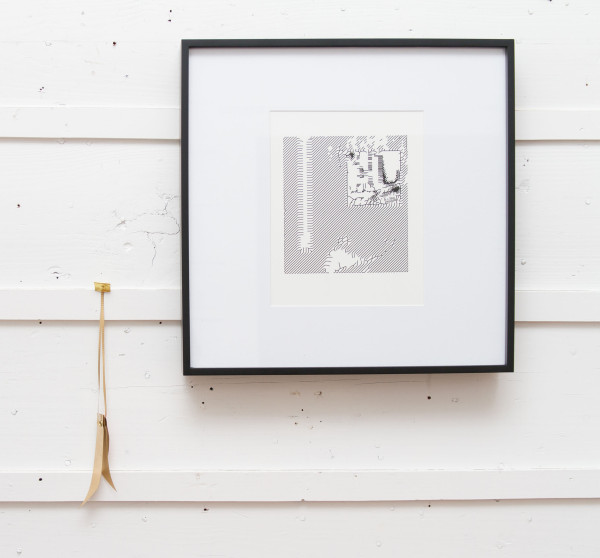 Hurry! Baggage: Works by Michael Corris + Kelly Kroener w/participation by Travis LaMothe will be on view at RE gallery + studio through January 4, with a closing reception on January 3, when a new book by Corris will be available for sale that contains all of his drawings used in the exhibition plus 19 more.