Walker refers to the tightly constructed, low-tech Minimalist-painting hybrids in untitled [new paintings by Eli Walker] at RE Gallery and Studio in Dallas as sentient, possibly even knowing. They are vital things on par in substance and importance with humans.

This human-thing parity is an instance of “object-oriented ontology,” the latest philosophical craze in academic circles. Refusing the hierarchy of man’s existence over all other living and non-living matter, it is a philosophy that displaces the consciousness of humans as central, and engenders the possibility of life, thinking, and consciousness in unexpected places and things. That beanbag you just scrunched down into is part of a living continuum that includes you as well as the art in your midst. The inanimate is truly animate.

To the accusation of “object-oriented ontology,” Walker responds just like his paintings, demurely. For the artist they are simply well constructed things that happen to be paintings as well. And, as much as you feel their presence, they might feel yours. 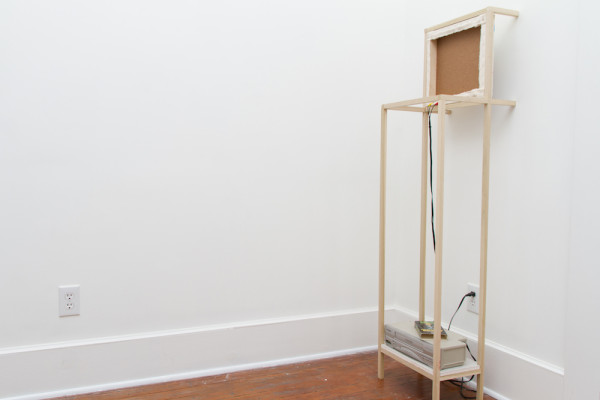 Mammalian characteristics of introversion and extroversion connect in Walker’s untitled [vhs], a wooden structure with a VCR playing David Bowie’s Ziggy Stardust and the Spiders from Mars (1973). Rather than a TV, the VCR is plugged into the frame of a painting mounted in the structure above. The energy of the film whirring below channels life into the backside of the small painting shyly facing the wall. Crain your neck around and you will see at an oblique angle layers of paint: striations, colored lines, and other informal flourishes.

The pieces at RE Gallery and Studio are not about words but sincerity and the physical experience of encounter. Giving language to his work after cajoling, Walker calls untitled [kentucky lake 1] and untitled [kentucky lake 2] “landscapes.” Bent surfaces with tape-lined and gestural marks in 1980s colors (mauve, blue, and silver), they are somewhere between de-wheeled longboards and weathered planks. The two pieces suggest landscapes only in their bowed curvature. They seem to incarnate Greenbergian abstraction and flatness. Carefully constructed curved canvases, with wide tops and narrow edges, as bearers of  “objecthood” they are part of a formal enterprise that includes the painted objects of Ellsworth Kelly and the early works of Frank Stella.

A member of the S.C.A.B. artists collective, Walker admits his allegiance with New Casualism and New Provisionalism, after some coaxing. The self-deprecation, self-abnegation, and intuitiveness of his peekaboo paintings place him squarely within these trends. Walker’s work bears what writer/curator Sharon L. Butler calls a “calculated tentativeness.” The pieces seem like “open propositions,” to quote Butler again. 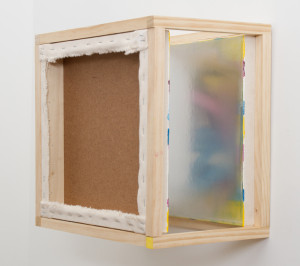 Walker’s aversion to language is a marked turn away from the intellectual hullaballoo of conceptualism—decades of Wittgenstein, Structuralism, Post-Structuralism, and Deconstruction that arose on the heels of a collectively deemed “anti-intellectual” generation of Abstract Expressionism.

The work of casualists and provisionalists, like Walker’s, is not what critic Jerry Saltz has called “Neo-Mannerism.” These artists are, if anything, neo-modernist. This crop of new, young work in Dallas is a throwback to Giacometti, Guston, and Rothko. Dallasites were first introduced to this revisionist modernism with the painting and collages of Being and Nothingness (2009) at the now defunct Light and Sie Gallery and the large-scale sculpture of Statuesque (2011) at the Nasher Sculpture Center. In Walker’s new work we see glimmers of other modernists: Jackson Pollock’s intuition without his machismo; Agnes Martin’s tight form, without the evanescence; and the constructedness of Blinky Palermo sans hidden ambitions.

The artists of this generation, the casualists and provisionalists like Walker and his compatriots in S.C.A.B., are not interested in how or what you call them. They are not interested in what I say. They just want to make art, and I don’t blame them. We are actors in an art world where 150 is the fulcrum: National Endowment for the Arts funding is just under $150 million as is the record-breaking auction price for a single Francis Bacon triptych. It is almost impossible to be an artist in the American economic context, so I do not want to simply say hats off to Walker and the emerging generation of artists but bravo! Make art. Make things. Bollocks to linguistics and the like!

Hurry! untitled [new paintings by Eli Walker] will be on view at RE Gallery through November 30. 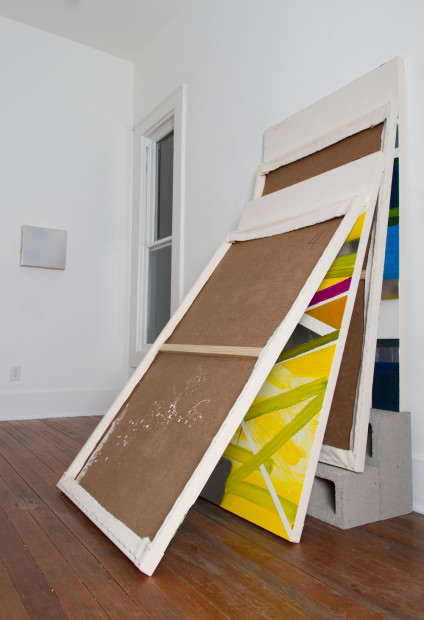 What are the similarities between Giacometti, Guston and Rothko that these artists share?

“Bollocks to linguistics and the like!”??? Surely, there is some way to say that without recourse to, er, language??? Hmm, a paradox? Well, aside from that snarky sting in the tail, I find Ms. Terranova’s review perfectly pitched to embrace Walker’s work.

Yawn. I have a hard time understanding why this review was written or any praise given.

This is some of the most boring art I’ve ever seen and one of the art-babbliest reviews I’ve ever read.

“Walker refers to the tightly constructed, low-tech Minimalist-painting hybrids in untitled [new paintings by Eli Walker] at RE Gallery and Studio in Dallas as sentient, possibly even knowing. They are vital things on par in substance and importance with humans”

What a load of pretentious delusional crap.

I must disagree with the anonymous commentator, “What a load”. This rather lowbrow seems more a personal attack than one driven by an intellectual, or even an anti-intellectual argument. It is somewhat catty, while not achieving a sufficient level of cleverness to satisfy even the average, vapid name dropper who frequents many of our local art openings. In my mind, Charissa Terranova’s article gives the reader a better understanding of both the artist and the work on view. It is also easy to understand. I learned a few things from reading it, myself.
She is far more polite and open minded than I ever could be. Myself, I would have dismissed both the work, and its intended audience as mindless formalists, and left it at that. My readers would have gained nothing but a laugh, or maybe an aneurysm. Her writing on this topic enriches even her disclaimers.

Animism is the new black

@7 wow I read that. He writes “Arts organizations and gallerists have created a good business model to traffic low-risk art work. But without risk we end up with uninteresting art”, and then he goes on to make a bunch of boring, low-risk, uninteresting art.

He was touted in another publication as being the “new edgy young artist who isn’t going to take it from the Dallas art establishment”, and then he goes on to make this boring, low-risk, uninteresting art.

“I take the bold step upon myself to be a critic. And I will break hearts… evenly. Democratically. I’ve been inspired by the Occupy protests and I’m here to voice my .001 decimal opinion.”
– That naivete and egotistical nature of that paragraph almost made me barf.

You’re not nearly as edgy or interesting as you like to think, Eli. I’m not just referring to your art either.

“Her writing on this topic enriches even her disclaimers.”
Good one! LOL

@You’re not nearly as edgy as you think

You’re not nearly as edgy as you think.

I’m not edgy at all, thanks for noticing.

With Mr. Bise, I do not recognize any confederacy between the artists Giacometti, Rothko, and Guston. Much less any similarities in those artists work with the art of Eli Walker.
I did not see this show and am very unaware of Mr. Walker’s concerns, yet it seems more fitting to refer to the essay David Joselit’s “Painting beside Itself”. From the images in this article, it appears to be more about a triumph of support fasteners than the concerns of Modernists like Giacometti and Rothko.

Thank you for moving the post by my impostor. You might check to see if someone hacked your server. I looked at comments on December 3, and the impostor’s post dated dec. 2nd was not there at the time. Cordially, S

Just to clarify: we do not assign authorship to commenters — they leave names and emails, and given the volume of comments we receive and our current commitment to allow people to post anonymously, there is no way for us to confirm posters’ emails. On the rare occasion when someone falsely uses a real name, we remove the comment and block that user.

Thanks for reading and posting.
Rainey Knudson

Thank you, Rainey.
I would now like to apologize to Eli Walker for my rude, asinine comments. I have never met him, nor have I seen his work. It is a bad feeling to realize that you have said something that hurts someone who is just trying to pursue their dreams and give something to the world that makes it a better place. Next, I would like to apologize to those people who I know and like for much the same reasons. I’m not perfect. I’ll do better, from now on.

And let’s just nip all of this in the bud. A collector saw beyond all of your petty cliques and self congratulatory society bs. And loved the work before this was written. This work or should I say works are now in the company of many many fine texas and beyond artists. Linguistic academic critiques? Thank God we have finally moved beyond that. That is only for academics that actually escape in text because they can’t make art. Let’s just leave it at that.

And Dave Hickey must be on pay roll

http://www.regallerystudio.com/#!slideshow/cmk1
A fine show I might add for dallas for texas for anywhere. Period.