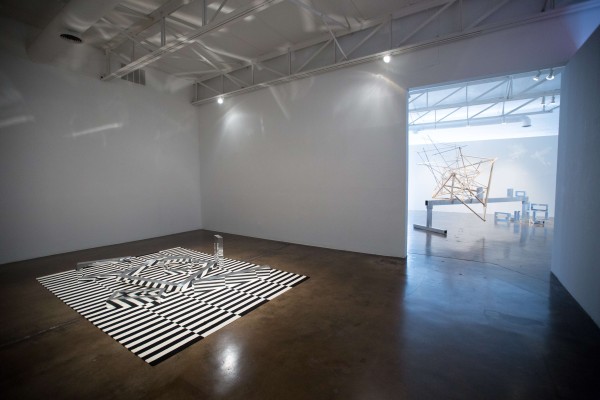 Walkin’ the tightrope, every day and every night

Walkin’ the tightrope, bring it all around

Walkin’ the tightrope from the lost to found…

For nearly four decades, Tom Orr has brought an unending curiosity, commitment, and conviction to making art that speaks to its necessity. He has garnered attention for his grand site-specific public art installations in Japan and in his hometown of Dallas—with his wife, artist Frances Bagley, Wildlife Water Theater (White Rock Lake); International Terminal D (DFW Airport); and Intersected Passages (Love Field Airport Terminal Entrance). Orr brings the same virtuous handling of materials and sensitive response to the context and physical characteristics of the space to his indoor installations, such as Floating Mountain (University of Texas, Arlington); and with Bagley, the sets and costume design for the Nabucco (an opera by Verdi presented during Dallas Opera’s 50th Anniversary) and Performance/Art (a group exhibition at the Dallas Museum of Art in 2009). No doubt, Orr can build anything.

When making his work—sculptures, installations and prints—Orr has always walked a tightrope, trying to find the balance, the right tension, between painting and sculpture; image and object; and abstraction and illusion. Another balance (and perhaps a more difficult one, because of Orr’s technical prowess), is the right balance between execution and conceptual ideas. Being off balance could lead to the perilous precipice of preciousness, which is an endgame.

But with Tightrope, Orr’s thoughtfully edited and installed second solo show of recent work at Barry Whistler Gallery (extended through October 24, 2015), Orr has found his balance, the right tension. If there ever was a precipice, it seems far behind him. 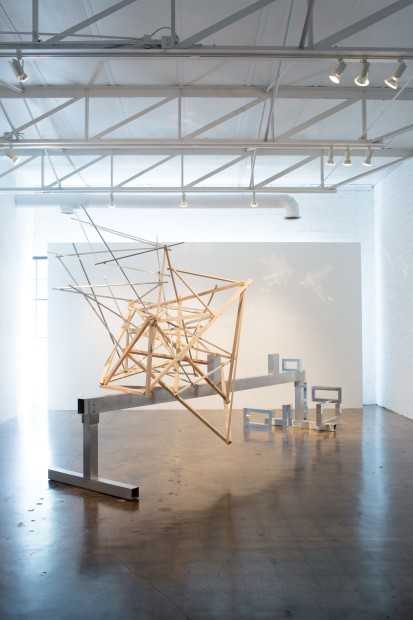 Installed in the first gallery is the large-scale installation Mr. Lucky. Precariously perched on a long I-beam of aluminum tubing is a large form of rough-hewn sticks of wood attached in a loose, crisscrossed manner and held in place by its own weight. Its outer edges are seemingly boundless and continuous; the process of its making is temporarily halted. At the other end of the I-beam, six mirrored, open-center rectangular forms are placed on the floor, on top of each other and on the I-beam. Reflected and refracted light casts delicate, graceful shadows and patterns on the floor, upper reaches of the walls, and ceiling. The “artist’s hand” and process are revealed in the smudges, thick solder and clunky bolts and plates. As you walk around the room, your perception subtly shifts, heightening your awareness of being in your body. Although Mr. Lucky is more visually akin to Anthony Caro’s important 1960s horizontally-oriented sculptures of brightly painted and welded steel I-beams, girders and other found elements, it speaks to Caro’s idea of “sculptitecture” expressed in his work of the 1980s, as well as the Minimalist concept of a work of art as a space in which the viewer’s body, the work, and the environment intertwine. 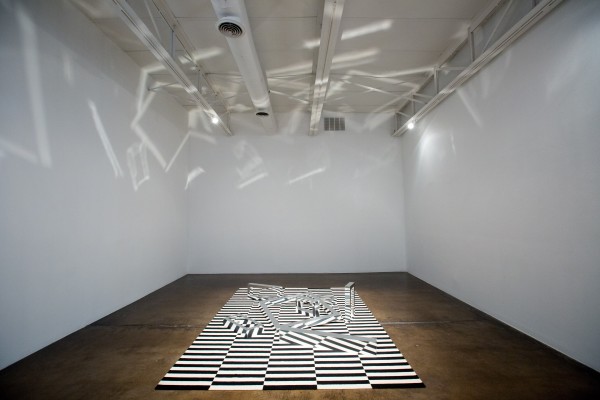 In the second gallery, a second large-scale installation, Paladin, is comprised of seven mirrored, open-center rectangles placed at different angles on a commercially-made carpet with a Modernist pattern of alternating black and white rectangles. Like with Mr. Lucky, light reflected and refracted off the mirrored surfaces create delicate shapes, lines and patterns on the walls and ceilings. Depending on your viewpoint, the mirrored surfaces are both physically present or dissolving. You look at the mirrors, and then through them, and at continually moving and zigzagging lines. Reminiscent of the 1960s black and white Op Art paintings of Bridget Riley, the sensation of movement of these stripes creates an event that is psychological, mind-altering and physical. Along with light, Orr has again enlisted our experience and our awareness of being in our body—or proprioception—as an effective and powerful media. 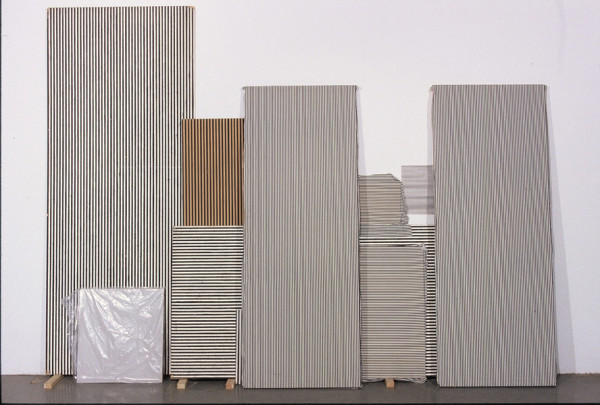 Also in the show, six small wall-based works recall, in their formal astuteness, Bauhaus Modernist explorations of good design (minus the intended goal of functionality). Each has a different arrangement of laminated inkjet prints with black and white striped patterns or colors: mid-century green and coral as well as white, black and gray. (The colors are recycled from Orr’s monumental Love Field Terminal Entrance commission, which was inspired by the original 1958 “Piet Mondrian-like” airport entrance sign on Mockingbird Lane.) A thin wire that looks like an intuitively drawn contour line hangs precariously out from each work, adding an organic feel.   Conceptually, these small wall pieces relate to the artist’s much larger floor installations in his studio. With these floor installations, Orr intuitively props, layers and leans mirrors, fragments or leftovers of other works, as well as clear materials such as plastic and Plexiglas—“shapes, colors, shadow and light”—to work out things dimensionally. “To look for that moment,” Orr has said, “when thought leaves the image and concentrates on idea.” 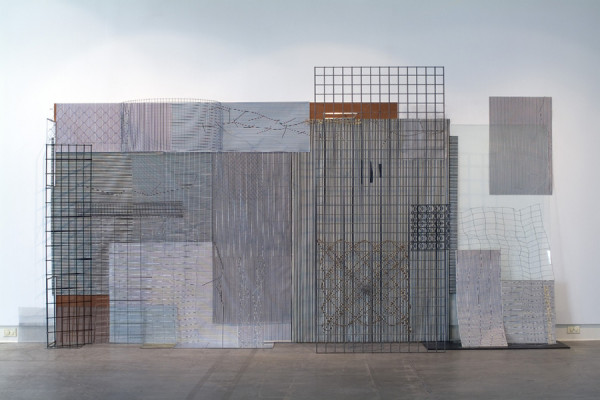 Decades ago, Orr learned what it takes to be an artist in a practical, hands-on kind of way. In the early 1970s, before going on to study sculpture at Rhode Island School of Design, he was an assistant in the Dallas gallery of the legendary dealer Janie C. Lee and worked with major artists such Robert Irwin, Alan Saret, and Alan Shields. (After Dallas, Lee had a Houston gallery, and then became a curator of drawings at the Whitney). With the work in Tightrope—intuitive, organic and process-oriented—Orr is pushing the materials and ideas he’s been exploring for years. He’s moved out of his comfort zone. This tightrope is taut: it’s longer and raised higher. Given this, I like to think that his best work is ahead of him (think Alex Katz and Joan Jonas), way past the blinkered talk of professionalism, careerism, and the art market.

Tom Orr is on view at Barry Whistler Gallery through October 24.