When the community newspaper White Rock Lake Weekly published an article nine days ago entitled “Art? Or an eyesore? City set to decide,” it prompted some serious folks in the Dallas art community to speak up. 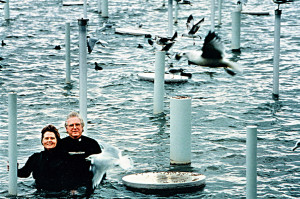 The article chronicled a meeting of the Public Art Committee of the Dallas Office of Cultural Affairs (OCA) that took place a couple weeks ago to consider “deaccession” of a piece of public art. The work in question is Wildlife Water Theater (2001) by Tom Orr and Frances Bagley, originally commissioned by the City of Dallas Public Art Program. Both artists’ websites include a short description of the site-specific work: “By day, the birds of White Rock Lake perch and fish off the poles and disks while people on land learn about them from the educational charts. By night, 20 of the poles softly glow with solar power from the previous day’s sun.”

At the sparsely attended meeting, some community members spoke about the work’s deterioration over the years, and recommended that it “should either be repaired or removed,” adding that “repair appears all but impossible.” According to the article, the Public Art Committee reached the decision to recommend deaccession of the piece at the OCA’s meeting on January 16.

Kay Kallos, OCA’s public art program manager, then began receiving the emails. Charissa N. Terranova, freelance curator and critic and assistant professor of aesthetic studies at the University of Texas at Dallas, warned of “a miscarriage of justice,” writing: “Before you can properly—judiciously and with proper scientific knowledge—answer the question of whether this piece is a work of art or an eyesore, you must open your public dialogue to experts.” Jeremy Strick, Director of the Nasher Sculpture Center, also stated,”[G]iven the significance of the work of art in question, I agree that it makes sense now to take a step back before any decisive action is taken. A broader discussion might yet yield viable alternative solutions, resulting in a more positive outcome.” Noah Simblist, writer, curator, artist and associate professor of art at Southern Methodist University, sent Kallos the following politely stern email:

I am writing to echo the sentiments of my esteemed colleagues. Public art is by definition, art for a public and should be treated as such rather than as a commodity that can easily be de-accessioned or destroyed. There should be a forum to openly discuss and debate the complex issues within such a decision that includes at its core an informed set of experts from the local art community. Secondly, there should be a clear articulation of the artists’ intentions.

While I have no doubt that you have the best of intentions in this decision and are under extraordinary fiscal pressure, I sincerely hope that you will slow this process down to allow for a truly public deliberation.

Apparently, the discussion must have been tabled on the meeting on the 16th, because Kallos sent out an email on the 17th stating that the matter would be discussed at its next meeting (the date of which has not been confirmed, but “probably next Thursday”). She added, “All comments from citizens on this issue have been and will be forwarded to the Commission for its deliberation.” Good to know! Comments may be sent to: [email protected].