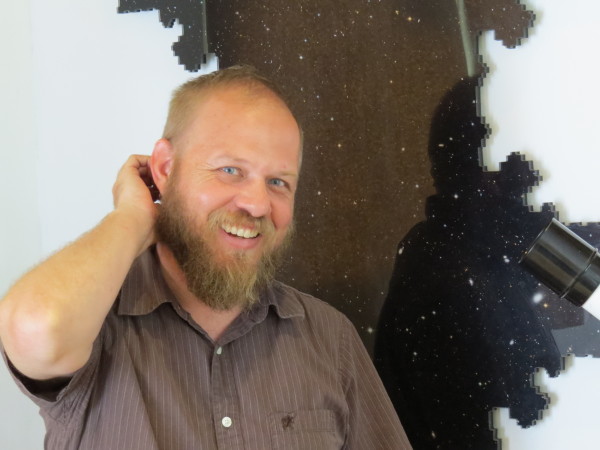 San Antonio artist Chris Sauter is something of a contemporary scholastic: a philosopher-seeker. He’s been exhibiting for fifteen years now, and navigating his website is almost like perusing a university syllabus, with the subject list that includes fields like agriculture, architecture, astronomy, biology, geology, and industry, along with a pop-culture topic: rodeo. Interested in cultural spaces and practices relating to these ideas, Sauter undertakes the majority of his explorations using installation formats; it allows him to present his discourses with a physical immediacy on a very human scale. This approach is significant for Sauter, in particular, because he believes that the primary tool for understanding the world is the human body.

Born in San Antonio and raised on a ranch in Boerne, Texas, Sauter earned a BA in 1993 from the University of the Incarnate Word and an MFA in 1996 at the University of Texas, San Antonio, which is known for its strong curriculum in conceptual art. Soon after graduating, Sauter’s gift for translating sharp ideas into striking and unexpected visual form was already evident in his installation, Graft, which he created as a resident artist at Artpace in 1999. With this work, Sauter introduced a process that he has since employed on numerous occasions: he cuts various shapes out of an exhibition space’s walls and uses the cut-out pieces of drywall as building blocks for sculpture. In this instance, the construction took the form of a typical dining-room table and chairs. The viewer, upon entering the space, had to go through a cognitive somersault of grasping the relationship between the wall that resembles an oversized stencil and the theatrically staged dining ensemble. Sauter’s personal take on the idea of a dining room is that it’s a ubiquitous social arena for family rituals; here the biologically related perform cultural functions according to accepted norms. But its strong conceptual bent had to do with the viewer’s experience while wandering through the installation as thoughts of other topics emerged: the function of architecture, the distinctions between sculpture and furniture, and the relationship between positive and negative space.

Growing up on a ranch, Sauter was introduced at an early age to the sport of bull riding. Invited in 2003 to create a new work for an exhibition at the Dallas Museum of Art featuring emerging Texas artists, Sauter constructed a complex environment resembling that of a rodeo, but used materials and images that, taken together, pose questions about gender identity.  Among the components of the installation Engaging the Minotaur is a video diptych, with one screen following the movements of the bull-riding cowboy, which Sauter considers to be a cultural construct, and the other showcasing the journey of the bull, which he considers to be a biological entity. As we watch the two move in unison on separate screens, we become witness to an interaction between culture (the cowboy) and nature (the bull), which Sauter views as analogous to the tug-of-war between cultural pressures and genetic pre-dispositions that occurs in the process of identity development. To personalize his analysis of gender, Sauter adorned the installation’s walls with illustrations of his family tree in both cultural and biological terms, with occupations charted as embroidered patches on a cowboy vest and genders branded on a bull hide.

As Sauter’s reputation grew, he became affiliated with San Antonio’s Finesilver Gallery. For his 2006 exhibition there, Sauter proved that art for sale can be presented in a meaningful installation format, where individual works relate and interact to form a collective experience. Although positioned at opposite ends of the gallery space, two installation-scale sculptures effectively examined the role of agriculture in the development of Texas industry and wealth. In Divide and Conquer (Guenther Family Tree), Sauter returned to a family-tree format to represent the dynastic power of the Guenther family, which founded the Pioneer Flour Mills, one of the oldest family owned businesses in the United States. To illustrate the family’s growth as an industrial force, the artist constructed their family tree as a scatter-style floor installation, with a replica of the landmark Pioneer building at the helm and family members represented as grain silos. When viewed from above, the installation brings to mind colonies of enterprising ants or bees. As a complement to this study in the expansion of family commerce, Sauter examined the role of farming in America in Plow Flag, which he created by transforming an American flag into a plow and field. With the hand plow constructed from cut-out strips of the flag’s star field and placed over the stripes, the red and white bands become the furrows of a plowed field. It reminds us that America encompasses vast expanses of farmland, but the installation’s flag symbolism calls attention to the right-wing approach to patriotism that tends to flourish in those areas. Many of the people who live in those regions would be the first to denounce the installation, calling it “flag desecration.”

Of all the subjects that have interested Sauter, one that’s generated some of his most profound bodies of work centers around our relationship to the cosmos, from the microscopic to the infinite. In 2005, Sauter returned to his process of cutting into walls and constructed a telescope from the circular cut-outs. In the installation Mind and Body, first exhibited at Sixteen: One Gallery in Santa Monica, the telescope is directed towards the wall, which by implication transforms the holes in the wall into constellations. While literally representing a setting for stargazing, the installation also spurs dialogue about how we obtain visual information—be it science or art—since a telescope is a tool for observation. For an installation at Blue Star Contemporary Art Museum in 2007, Sauter developed the concept further and moved from outer space to an intimate interior domain. For The Known Universe (Childhood Bedroom), the artist once again personalized his investigation and built a replica of his childhood bedroom, cutting holes in the walls and positioning the telescope inside the bedroom filled with furniture and memorabilia. Within the context of a child’s private space, the telescope here assumes the role of implement of curiosity, enchantment, and awe. 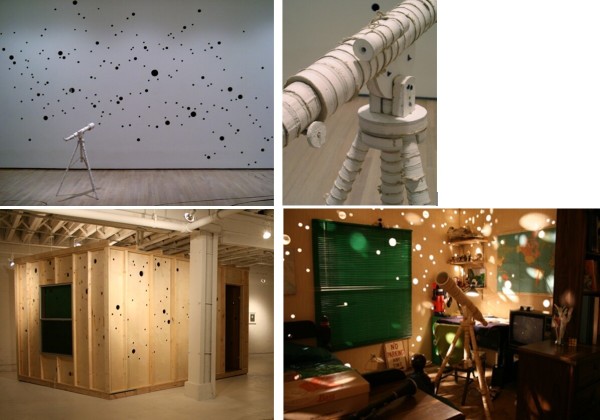 In a subsequent incarnation of the concept, created in 2010 for Fort Worth Contemporary Arts, Sauter achieved a union of the micro- and macroscopic. Cutting into the opposite sides of a freestanding gallery wall, he constructed a telescope pointed at galaxies on one side, and a microscope placed before a simulated projection of a circle of amoebic and cellular forms on the other. With its clean, formal simplicity, The Whole World communicates much with an economy of means as well as with aesthetic elegance. In short, it’s a complete and balanced conceptualization of the universe, accounting for both the most minute and the most distant conceivable elements.

In 2014, Sauter presented his most ambitious project to date: a series of related installations that occurred simultaneously at four locations. With the idea of breaking down what he considers to be the commonly accepted “false dichotomy” between science and religion, Sauter imagined the journey from one exhibition to the next as a contemporary pilgrimage. To reinforce this concept, he provided a brochure with a map to the different venues stating that the pilgrimage was to be led by St. Apophenia, a fictitious figure that Sauter created as “the patron saint of Patternmakers, Fortunetellers, Coincidence, the Mentally Ill, and Artists.” Apophenia is the experience of perceiving patterns or connections in random or meaningless data. 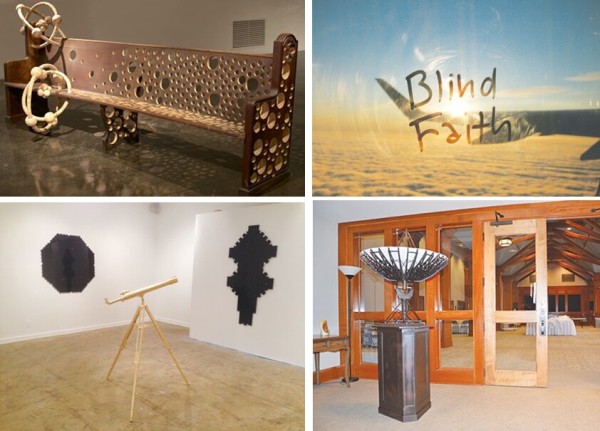 Of the four installations, Doubt, at the Southwest School of Art, was essentially the project’s textbook. Featuring numerous works in a wide range of media, the exhibition contained an enthralling mash-up of scientific and religious references, many of which were ironic. “God of the Gaps,” for example, was the title given to an altered church pew that appears to have sprouted two atomic models made from cut-outs from the pew itself. For Faith and Reason, held at Blue Star Contemporary Art Museum, Sauter exhibited photographs with words scrawled onto airplane windows while in flight. In one example called “Blind Faith,” the merging of the sun’s rays with the familiar cliché about wishful thinking is particularly effective in reminding us how one might suddenly become more devout while flying through turbulence. At St. Mark’s Episcopal Church, Sauter installed a pseudo-altar that he designed to resemble a radio telescope, but with ornamentation based on the Gothic style of the church’s architecture and furniture. And at Fl!ght gallery’s former space in the Lone Star Arts District, he exhibited Shape of the Universe, a stunning installation with a classical sensibility that seemed perfectly suited to the subject at hand: At the center of the square-shaped gallery, Sauter installed an actual telescope to which he had meticulously applied gold leaf, thereby giving religious significance to a scientific object. On each of the four walls, he mounted a large photograph, taken by the Hubble Space Telescope, of a galactic field, with each photo cut in the shape of an historic building associated with a different religion. Through this provocative marriage of two fields that are constantly in opposition, Sauter eloquently reminded us that science and religion are essentially alternative systems for explaining the same phenomena.