Which Texans are Big-Time Collectors? 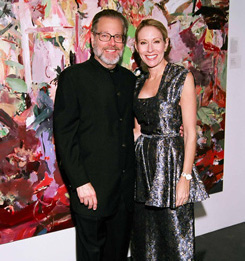 Howard and Cindy Rachofsky. Photo Credit: Courtesy of the Dallas Museum of Art.

Want to know which Texans are buying art? The editors at ARTnews magazine have just released their 25th anniversary edition of the “200 Top Collectors” and seven Texans made the list:

Fayez Sarofim has been on the list every year since 1990, when ARTnews first began putting the list together. The Arnolds are the newest to the list, although they have been on it for the past five years. The rest of the names have made the list for at least ten years, which suggests a stability of committed collectors in the state. This year’s “200 Top Collectors” includes 23 who are brand new to the list (including Leonardo DiCaprio).

There are a number of collectors who insist on remaining anonymous, so there are some who should be on the list but aren’t. But there’s a whole lot of money flying around the art market, as ARTnews reports, “starting bidding at $100 million is no longer a hurdle.”

New Arts Building at Rice University to be...