During the Museum of Fine Arts, Houston (MFAH) Grand Gala Ball fundraiser this past Friday, director Gary Tinterow announced that 125 masterworks from Fayez Sarofim’s private collection will go on long-term loan to the museum, beginning early next year. According to the Houston Chronicle, the works will be on loan and on view “indefinitely.”

Mr. Sarofim, who died earlier this year at the age of 93, was an Egyptian-born Houston-based businessman and philanthropist who supported the Houston Ballet, Rice University, MD Anderson hospital, and numerous  other organizations. In addition to his regular support of the MFAH, he played a major role in the museum’s $476-million capital campaign, which culminated in the opening of the Kinder Building. Mr. Sarofim donated $70 million to help kick off to the campaign, and the museum’s campus was named the Susan and Fayez S. Sarofim Campus in recognition of his contribution.

A noted collector, Mr. Sarofim spent 60 years assembling a significant private collection of 19th to 21st century American and European art, as well as Ancient Egyptian, Coptic, and Southwest Native American art. More than two hundred works from his collection were presented in the exhibition Three Centuries of American Art, which was on view in the MFAH’s Law building in 2021.

When Mr. Sarofim died, he had not left guidelines for the management of his collection. His eldest son, Christopher, worked with MFAH chief development officer Amy Purvis to arrive at a long-term loan agreement, which includes works from across the world. As early as January 2023, the pieces will begin to be installed in the museum’s collection galleries, integrating with the museum’s current holdings. Among many others, the collection includes works by John Singer Sargent, Mary Cassatt, George Bellows, Edward Hopper. 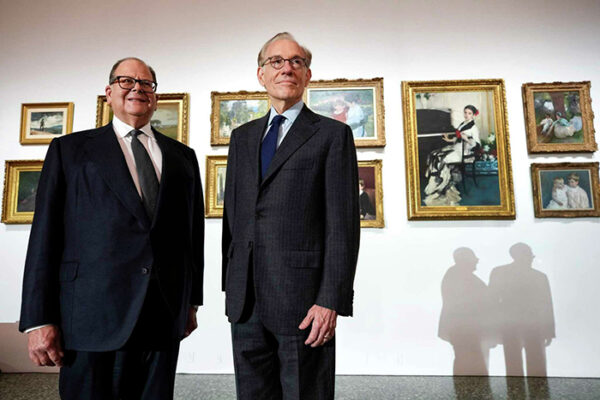 Christopher Sarofim, left, and Gary Tinterow, Director of the Museum of Fine Arts, Houston, pose for a portrait with some of the art Sarofim’s family is loaning to MFAH on Thursday, November 17, 2022 in Houston. Photo: Houston Chronicle, by photographer Brett Coomer.

At the gala, which honored and celebrated Mr. Sarofim’s contributions to the museum,  attendees got a glimpse at what’s to come: works from Mr. Sarofim’s collection were hung salon-style for the event in the museum’s immense Cullinan Hall exhibition space. Mr. Tinterow spoke to the significant undertaking of incorporating the over one-hundred pieces into the museum, saying it will require a “complete reinstallation of [the] late 19th and early 20th century art galleries.”