Beware of enterprises that require new clothes. Unless artists make them.

Why do artists make clothes?

I first started noticing Houston artists making clothes when Dennis Nance showed me his shirts. The shirts are always the same cut and construction, and differ only in their printed fabrics. Dennis works at Lawndale Art Center, and you always see him there wearing his shirts.

Dennis is not alone: there are a lot of artists are making clothes these days. Artists have always made clothes, of course, but now they seem to be making them less as sculptural costumes (or just sculpture), than as regular clothes.

Is this art? Is that a stupid question?

While artists making clothes for ceremonial purposes goes back probably as far as humans go back, there’s a more recent tradition in the past century or so of artists seriously considering the social implications of clothes, creating manifestos about them, and making them simply as sculpture.

In the early 20th century, the Futurists’s desire to overturn all that which was traditional or nostalgic in favor of the forward-looking and mechanistic included various manifestos on the subject of clothing. They designed unisex everyday wear: 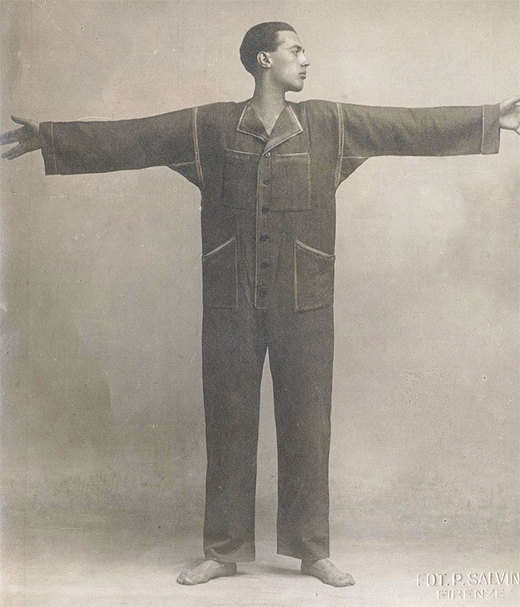 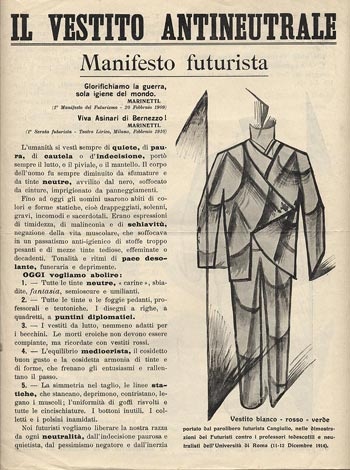 In addition, both the Futurists and the Dadaists designed elaborate costumes for their performances. Hugo Ball, author of the 1916 Dada Manifesto, organized readings of his nonsensical poetry: 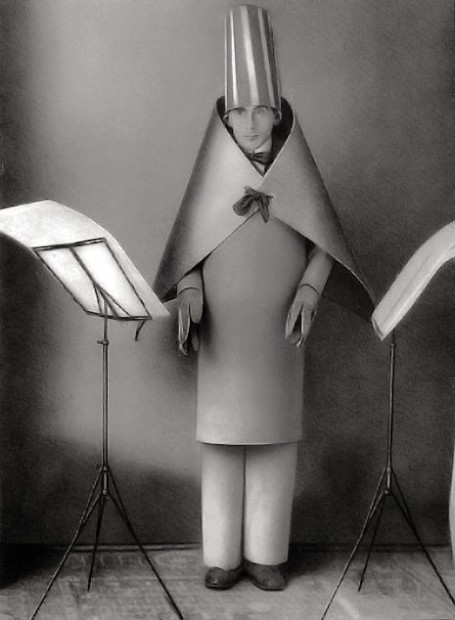 Hugo Ball in his “cubist costume” reciting a poem at the Cabaret Voltaire, 1916 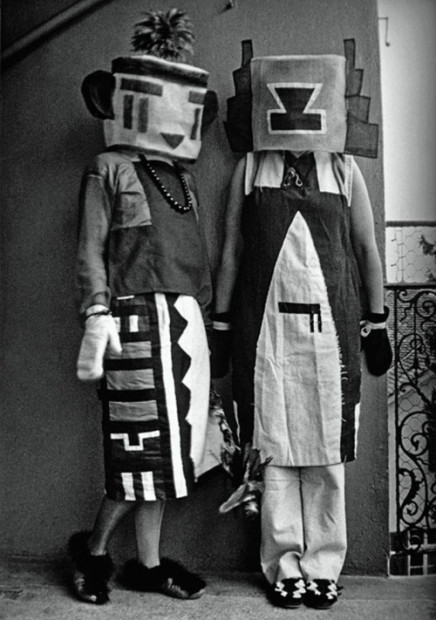 The Swiss artist Sophie Taeuber-Arp and another woman dressed in kachina-inspired costumes designed by Taeuber-Arp for a Hugo Ball reading, 1916

Later in the century, male artists made clothes as a critique of the depersonalized uniform of the professional man: 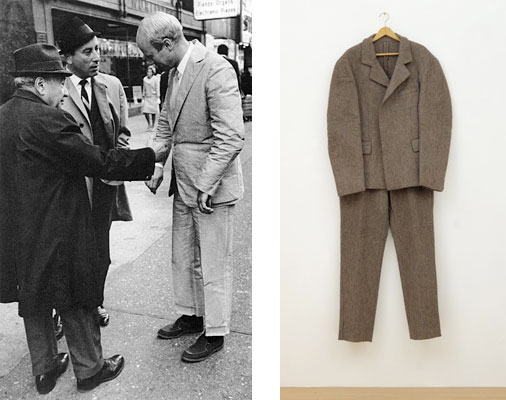 Of course, artist-designed costumes for performance never went away completely. Recent examples include Nick Cave and Laurie Anderson’s suits, which have a sound component, and the former Houston artist Gene Pool, whose suits were a regular fixture in early Art Car parades.

And the proto-rave club fashions of Leigh Bowery in the 1980s strongly evoke those earlier Futurist and Dadaist performances. What goes around comes around:

I would be remiss if I didn’t mention The Art Guys’ suit project from 1998, in which they sold advertising on bespoke suits designed by Todd Oldham and wore them publicly for a year in a sculptural performance*: 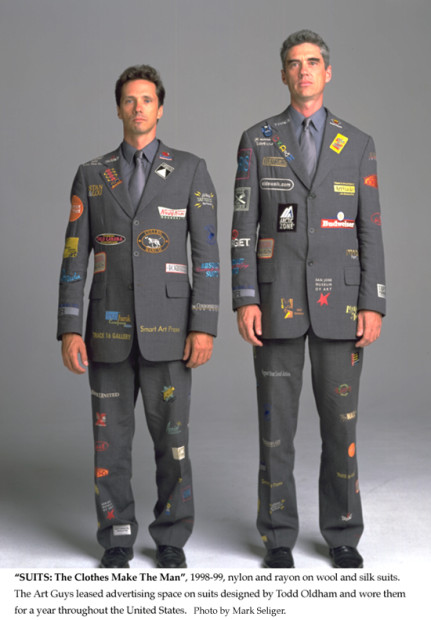 Now it seems artists are making clothes to be worn every day, mostly just for themselves but sometimes for other people. I spoke to some artists who make clothes, and they gave me a variety of reasons:

1. They dislike fast fashion** for the poor quality.
2. They dislike fast fashion for the social and political implications about self-sufficiency, inequality and our consumer society.
3. It’s an activity that takes a discrete amount of time and results in a satisfying, concrete outcome.
4. They want control of the way they look.
5. They want to save money.
6. It’s fun.
7. All of the above.

Whether all this adds up to art making or just another manifestation of the current fad for handicraft is debatable. I think clothes made to be worn every day, regardless of who makes them, aren’t art. They’re clothes. But some of the following makers disagree with me.

So here are some interesting people I ran across in my hunt for artists with the sewing bug: 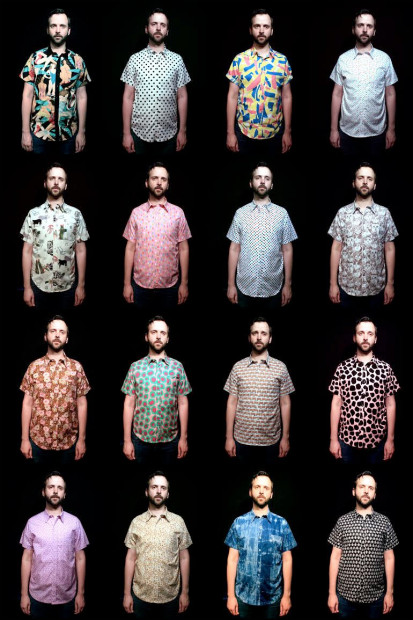 “A pair of jeans and one of my shirts is now my uniform. It keeps life really simple. I found something I like and I’m sticking to it.” – Dennis Nance 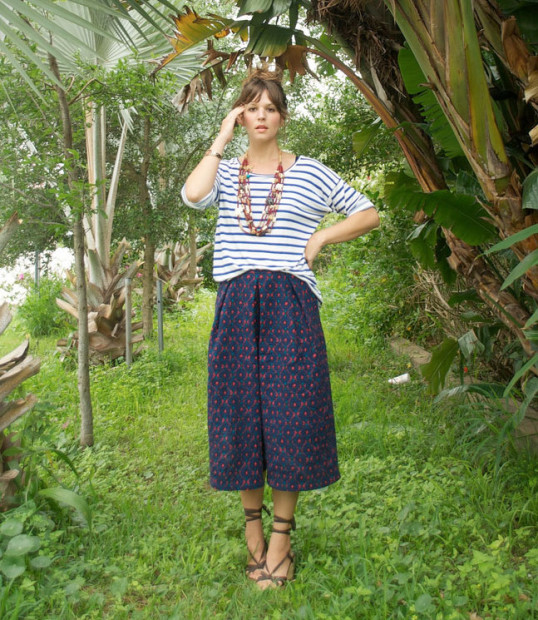 “The practice and energy I used to put into painting, I now put into making clothes. People who knew me try to talk about artists who make clothes as sculpture or as social practice, but that’s not really what I’m doing. I just make clothes.” – Sallie Barbee 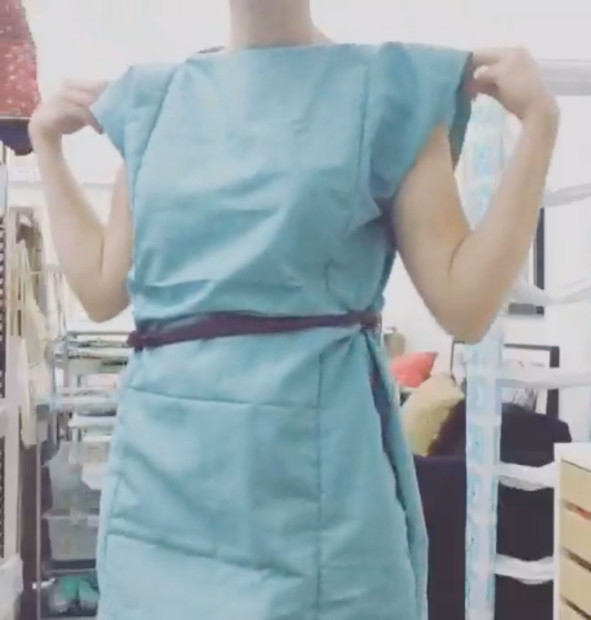 I like the useful aspect of it, and that you can be out and show your work without having to have an exhibition. I like thie idea that I would make the dress for people to wear, and it would be part of my practice. People would wear the art. – Ariane Roesch

Finally, two artists originally from Fort Worth, Travis Boyer and K8 Hardy, are busy in NYC with practices that are at least in part informed by clothing and fashion. Boyer makes work involving indigo dyeing and also facilitates collaborative “ponathons” where participants make pon-pons that are wearable: 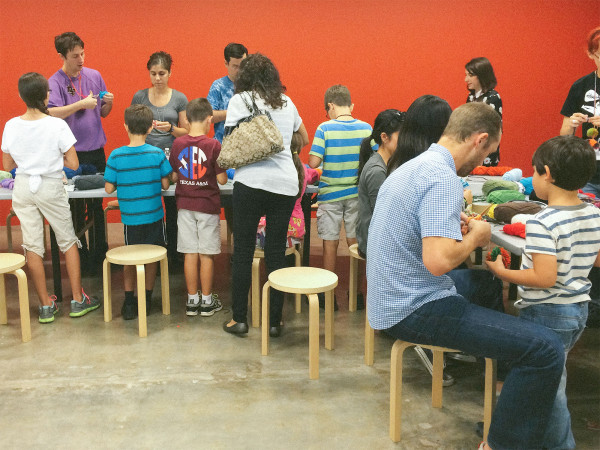 Travis Boyer (purple shirt on the left) conducts a pon-a-thon at the Contemporary Arts Museum, Houston in 2014 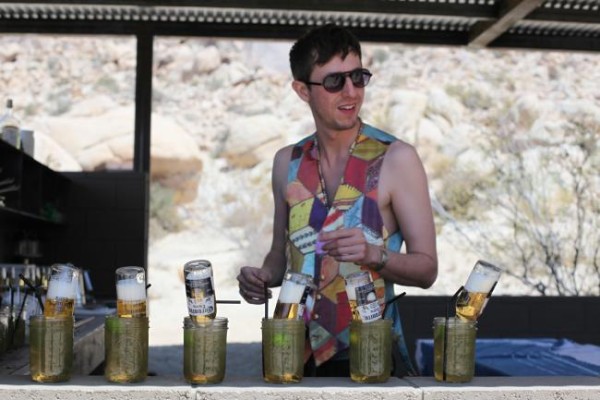 K8 Hardy has a rockin’ Instagram feed, she presented a runway show as part of the 2012 Whitney Biennial, and she just recently finished a film called Outfitumentary that documents more than 8 years worth of daily looks. 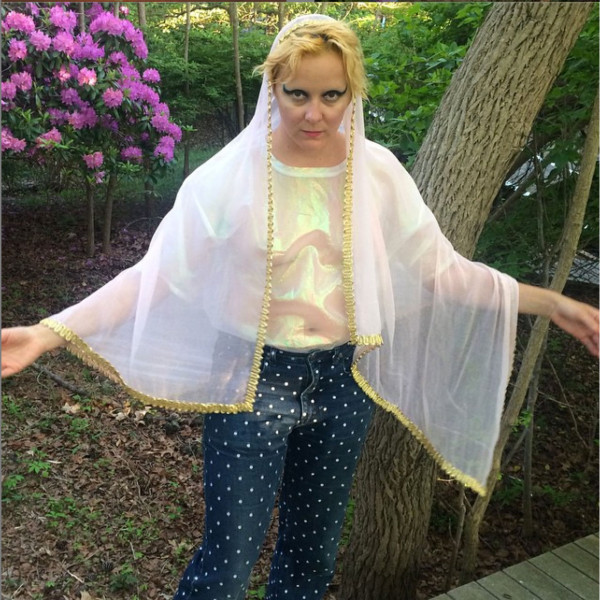 “I think of my basic gesture as the American middle finger flying in the air of defiance.” – K8 Hardy

* Full disclosure: I am married to one of the Art Guys.
** Fast fashion = cheap, poor-quality clothing that copies runway designs, sold mostly at big box retailers.