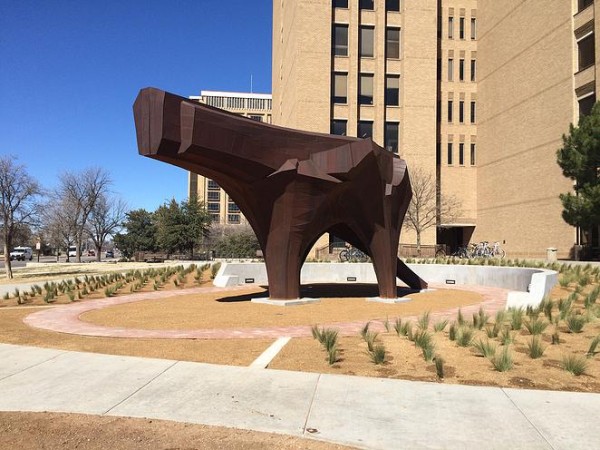 The newest addition to Texas Tech’s public art collection in Lubbock isn’t a recent commission (most big artworks on college campuses are new when acquired); in an uncommon move the university has purchased a large untitled 1974 piece by former TTU architecture professor/artist Robert Bruno. The piece had been living in a cotton field belonging to the late Bruno’s friends just outside Lubbock until it was relocated in January to its new post outside of TTU’s renovated College of Architecture. The sculpture and its new surrounding plaza will be dedicated on April 20. The story behind the piece, Bruno, and the university’s decision to add it to its collection is a good one. 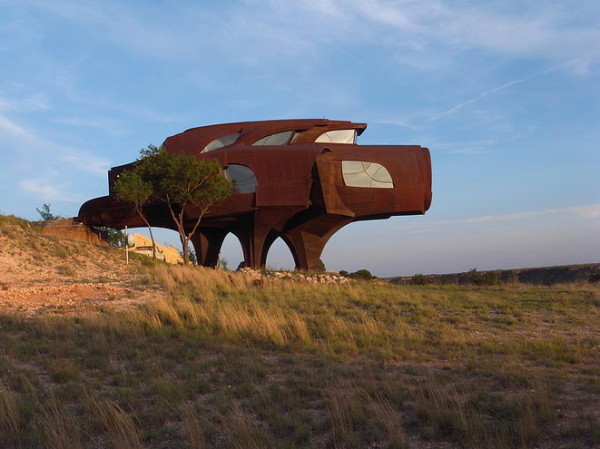 The giant steel abstract zoomorphic sculpture is one of the only remaining works by the enigmatic Bruno, who died in 2008 and is perhaps best known for his Steel House, an extraordinary sci-fi-ish sculptural dwelling which after 30 years in the making now sits unattended 15 miles east of Lubbock. (Word is that the 1974 sculpture acquired by TTU directly inspired Steel House.) Bruno, who worked on the house near-solo and piecemeal, died before it was completed. Here’s an excellent recent essay on the house and Bruno by the DMN’s Mark Lamster.

Mark Lamster received a lot of his information from Emily Wilkinson of TTU’s UPAC. Perhaps the Dallas Morning News should have clarified…