How the Light Gets In: Recent Work by Former Core Fellows

It isn’t uncommon for Core Fellows to be accused of being heady, overly conceptual, inscrutable. The second to last show at the Museum of Fine Arts’ Glassell School building, How the Light Gets In: Recent Work by Former Core Fellows verges on that inscrutability.

After spending time with the work, commonalities quickly start surfacing. Perhaps Leclère and Cox-Richard didn’t consciously organize the show with a specific theme in mind, but it seems as though all the work in the show somehow links to identity and its relationship to the body.

At the entrance I was immediately confronted with Mequitta Ahuja’s Yellow I (2013). A fairly large vertical painting, it is dominated by a beautiful, young black woman’s hair. Bulbous and voluminous, the hair snakes back and forth down the picture plane. Ahuja populates the innards of the hair with dark, aggressively applied circles. A yellow ribbon thrashes around and across it, giving it the energy of a buzzing beehive. The hair stands resolute and luscious, as if it is its own autonomous body. The woman’s neck is truncated. Her actual body is cut out of the top of the painting: it looks as though she is ascending or drowning. 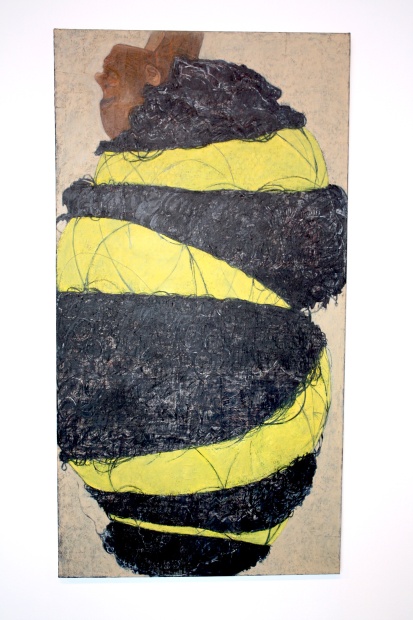 Tucked away to the right in its own gallery is a dual channel installation entitled A Bestiary (2013) by Fraser Stables. Normally a dual channel video is two videos playing side-by-side on the wall, or projected diagonally onto a corner, but Stables has built two small screens in the middle of the space. Both show videos of animal tattoos on someone’s shoulder or torso that shift back and forth amidst minimal lighting. The videos feel dismissive and heavy-handedly grainy, like cheesy anti-drug commercials from the ‘90s, made ominous and intimate by the delightfully heavy and confusing sound , like recordings of industrial labor, or sex, or maybe someone just rummaging around their own home. Glowing lines of light on the walls, created by the projectors’ light overlapping the screens feel scary yet comfortably domestic—like light peeking through a cracked door. 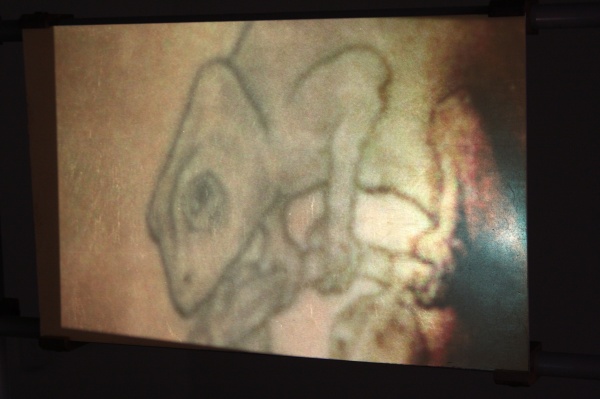 Out of everything in the exhibition, Karyn Olivier’s Still Life Series (Matinicus) (2014) seems the most divorced from the body. Olivier has arranged straightforward, innocuous materials like foam, mirrors, and colored paper in modestly sized photographs. Dirty foam rises like bread as colorful lines slash harshly, horizontally across the picture plane. The materials, however, are photographed with such precision that they become transformed: gelatinous paint coats the foam, glistening like icing even as the foam itself looks soft and porous, imploring us to squeeze it. These simple documentations nevertheless command our engagement, jumping out into our hands and mouths. I felt like I could spend hours with this work, as if I wanted to reach through the photographs and eat everything in it. 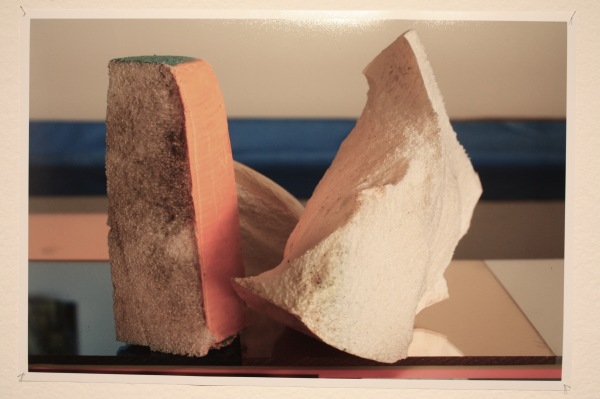 But not everyone feels the same way about Still Life Series as I do. I was discussing the work with an acquaintance, and just as the words, “I’m completely in love with them” were about to tumble out of my mouth, he uttered, “I think they look really flat.” Neither one of us is wrong. Paired with the materiality of Jeff Williams’ mammoth concrete sculpture Tension and Compression Table, Olivier’s work can come off as flat and vapid. It’s a faulty combination. Perhaps they should swap places with Nick Barbee’s CATO (2012). His frail, intricate wooden sculptures would be a better counterpoint for Tension and Compression Table’s (2014) monumentality. 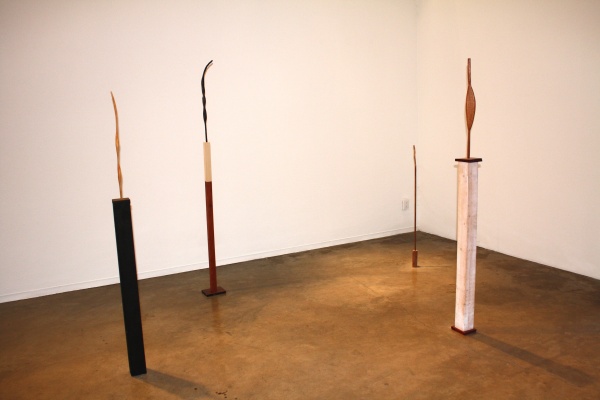 On its own, Tension and Compression Table is a straightforward study of the properties of concrete and tension. Four blocks of concrete are stacked one atop the other, the top layer bending and cracking. But Steffani Jemison’s Same Time (2013) playing in the background—a stuttering, hymnal, repetitive harmony reminiscent of early Gertrude Stein—makes Tension and Compression Table feels more funereal, more ceremonious. Concrete blocks lie like slain bodies, the gallery lighting descending upon their arching backs. A circle of black metal rods thrust upwards, surrounding the concrete blocks and looking down on them, lifting them up and crushing them. 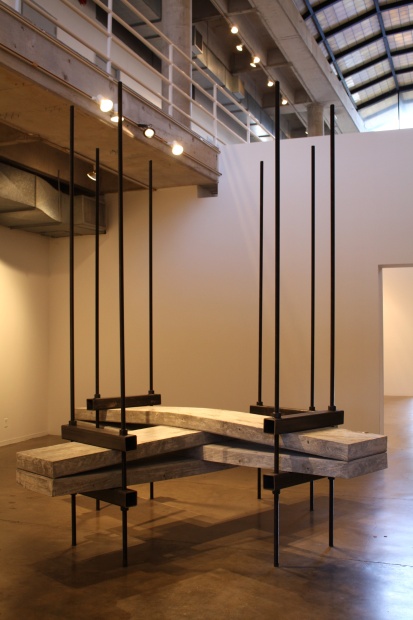 How the Light Gets In could have used recent work by hundreds of former Core Fellows, but the recent work of these seven artists—Mequitta Ahuja, Vasco Araújo, Nick Barbee, Steffani Jemison, Karyn Olivier, Fraser Stables, and Jeff Williams—pulses with bodily tension. It will be interesting to see how this exhibition of former Core Fellows will compare to those of current Fellows at their upcoming exhibition in March.

How the Light Gets In: Recent Work by Seven Former Core Fellows is on view until January 11, 2015 at The Glassell School of Art, Houston