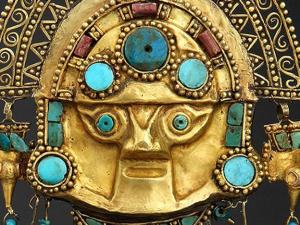 After a five-month stint at the National Geographic Museum in Washington D.C., an impressive show of Peruvian, Pre-Inca artifacts has traveled to the Irving Arts Center, which will be its only other Stateside appearance. “Peruvian Gold: Ancient Treasures Unearthed” was organized by the National Geographic Museum and opened in Irving last weekend. It showcases “ancient gold and silver artifacts excavated from Peru’s legendary royal tombs…” in the form of “ceremonial and funerary masks, textiles, ceremonial ornaments,” as well as ceramics, pottery and other jewelry from the era.

The key piece in the show, called El Tocado, sounds spectacular: it is the biggest and “most ornate pre-Columbian headdress ever discovered.” It dates from around 1000 A.D, and this is its first appearance in the U.S. since it was discovered 20+ years ago. In fact, none of these works have traveled much and are on loan from three Peruvian institutions: Sican National Museum, Larco Museum and Museum of the Central Reserve Bank of Peru. The show runs through December 31. For more information, please go here.