There’s a New New-Media Gallery in Dallas; Opens With a Show by Thor Johnson 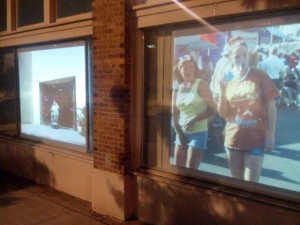 A new gallery called Midway is opening in the re-igniting Fair Park neighborhood of Dallas. The space, owned by Denton transplants Lily Taylor and Sean Miller, both musicians and artists, will be dedicated to showing video and new media; the live-work, street-level loft “features video projections in… large storefront windows that directly engage viewers on the street, sidewalk, and passing DART trains. Windows are illuminated nightly, unless other wise posted. [sic]”

The inaugural show, opening tomorrow night (Friday, Sept. 19) is photography and video by Richardson-based (and longtime Dallas art-scene fixture) Thor Johnson. “Fair Game” will feature covertly snapped photographs Johnson took of people at the State Fair between 2004 and 2008 (a precursor to People of Walmart), as well as the completely insane cartoon shorts he made around the same time. How the unprepared passing public reacts to these images remains to be seen (and I wonder if the display will include sound?).

The opening will, according to Midway “take place at 8:30pm (Friday) followed by a brief Q&A with the artist, moderated by THRWD Magazine co-founder/editor and culture creator, Lee Escobedo.”

Midway Gallery, 3809 Parry Ave #107, Dallas, 75226. A note from Midway about entry: “Please use the gated door on the side of the building closest to the rail road tracks. Street parking available. DART is highly encouraged.”

Did you ever work at the Unocal Research Center in Brea, CA? If so there is a group on Facebook: Unocal Research Years, you may want to join. Photos and pics from 80’s – 90’s.
Susan (ex-mail girl)