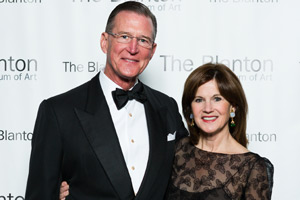 Houston residents Charles and Judy Tate have donated their private collection of 120 modern and contemporary Latin American artworks, valued at nearly $10 million, to the Blanton Museum of Art at the University of Texas. In an extra fit of generosity and smart thinking, they also donated more than $1 million to an endowment that supports a Latin American curatorship.

As Houstonians, the Tates could have donated the collection to the Museum of Fine Arts, Houston’s impressive Latin American collection. They are also MFAH supporters, but as UT alumni, the couple says they always intended that the collection go to the Blanton. “As a teaching institution, the Blanton has other missions. It relies on alumni for support,” Tate said.

Texas art lovers tend to take their Latin American art for granted, but the Blanton and the MFAH were huge pioneers in the now-popular field. For more on the players and history of Latin American art at the two institutions, as well as the Tates’ gift, read Molly Gletzner’s in-depth article in the Houston Chronicle.