Christina Rees:  I was thinking about art crawls in Houston and Austin. We have big open gallery walk days in Dallas, and studio tours in East Dallas and the Cedars. The Cedars Open Studios is this weekend, too; it’s been happening for about a dozen years.

But the concentration of studios in East Austin is pretty intense. I’ve never been to E.A.S.T.

BD:  Yes. I think anyone can be included on the tour, if they’re willing to put a big numbered sign in front of their place.

CR:  Do you think higher-profile artists skip out on this event?

BD:  Depends on where their studios are. Austin’s a pretty community-minded place. I think it would be hard not to participate if your neighbors were. Also, galleries participate, of course, and represent some of the more prominent artists. 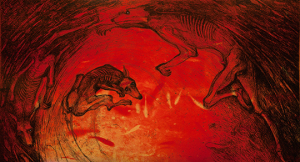 Flatbed Press is on the East Austin Studio Tour

CR:  I wonder if there’s a kind of star system of amateur artists who really clean up during E.A.S.T. Like, they’re the go-to for newbies looking to buy a little art for their living rooms.

BD:  I certainly saw a lot of salable work at E.A.S.T., everything from little paintings to custom biker clothing and handmade soap.

CR:  That sounds like First Monday in Canton or a motorcycle rally.

CR:  Context gets all blurry in this case. The best stuff can get lost in the mess, the bad stuff can get some elevation through the good nature of the event. 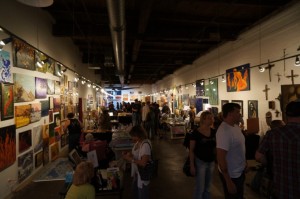 BD:  I don’t know if it’s a worse context to see work than most art fairs.

CR:  It’s odd to find an artist who is doing ALMOST everything right, so that with just one more left turn, or maybe really a few zigzags, the work could look at home in David Zwirner’s gallery. But then that would be about some sort of false editing. Sort of ignoring the artist’s actual mind and decisions.

BD:  Certainly an art crawl is a better context for portable, autonomous, traditional art objects than for slow subtlety.

CR:  Or there’s so much of it–just stacks and stacks of it–and if it was really edited down the work could look more mysterious or impressive?

BD:  We need an example here: What would look good in David Zwirner’s gallery?

CR:  Well, I was in a little neighborhood gallery in Highgate in London earlier this week; it was a community space for hire (I think; I was just out strolling) in an old church or school. Some of the big paintings on the wall were almost there in a way, and the artist was standing there, talking to visitors, and on the floor were stacks of works on paper, just mountains of it, and the sheer volume was undermining to the rest. I wish I had taken a pic. So he’s only a few miles north of Mayfair [where the big legit galleries are] but still a weird million miles away from “The Art World.”

They reminded me a little of Armen Eloyan’s stuff, or a touch of Joyce Pensato mixed with Jess. But I can’t tell him how to end up at Zwirner or Marian Goodman. No one can, really. 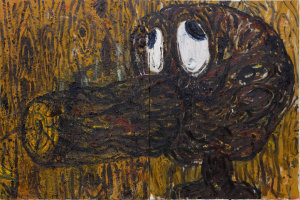 BD:  In his piece we published yesterday, David Rubin talks about Albert Alvarez’s one-painting show at Sala Diaz in 2012 . Showing one painting is extreme, and chancy; can be a cheap shot at making it more mysterious and impressive, or it can be a natural way to focus attention on something that needs it. Anytime you show more than one work at a time, one is going to be better than the others. A lot of fine works get put into the shade through the misfortune of being shown alongside even better ones.

CR:  So true. Volume is hot right now! But in group shows, artists have to be aware that being shown alongside weak stuff doesn’t do your work any favors.

CR: Do you buy things at art crawls? I would! I can get ridiculously sentimental very quickly. Especially while chatting with the artist.

BD:  I’ve never bought anything. I’m a terrible art patron. I’ve gone to Artcrawl in Houston many times, always hoping to find something great, but I hardly ever do. I don’t want to believe that artists who clump together into warehouses are always bad; I know for a fact that they aren’t, but the art that comes out of those places is less likely to be interesting than average.

CR:  You have a lot of art at your house, however.

BD:  Traded, scrounged from the trash, made it myself.

CR:  I have so many smaller things in my house. And I love video, but that doesn’t count here.

CR:  I give Amazon a lot of money to watch content.

BD:  Artists (at least up until now) are too protective of their elite collectors. There’s a lot of video and film work that is not available anywhere, when it could be easily streamed. It’s like somebody writing a book, and making five copies of the manuscript.

CR:  Like Christian Marclay. I find it astonishing in this age that I can’t watch The Clock. You would think by now the pirates would have put it out there somehow. I suppose they have and I don’t know where to look. There’s no way to keep video exclusive in the long term. Not anymore.

But if he works on one video for an entire year and then it just streams for free, he dies of starvation.

BD:  I think you’re right. Marclay’s The Clock is a good example. Sounds like a great piece, zillions of people saw it, but I never saw it, but for this bit, and now I can’t. It’s frustrating. I’d pay $1.99 to watch 20 minutes of it this afternoon. Marclay would be rich(er)!

CR:  Maybe people really are getting used to the idea of paying for content. Instead of going the other way, which is what everyone has been terrified of, if they’re creative.

CR: I love going into other peoples’ spaces. It’s so telling. It’s like a psych profile.

BD: The Houston Artcrawl used to really be a crawl through some very dirty ad-hoc spaces. It’s also at night, and is more of a party. Bad storms scheduled for Saturday night here, though. Maybe we’ll get the Lake Effect! 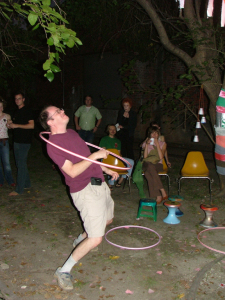 CR: Take some pictures this year. Take a pic of your favorite thing. Then buy that thing and put it in the Glasstire office. A reminder: “Here is something from another layer of Houston’s art community.”

BD:  I think it would be more inspiring if, after the art crawl, everyone took all their work and made a grand bonfire of it. We could start afresh next year.

BD:  Anything good up in Dallas?

CR:  Well, you know about the group show Sundowner at Circuit 12, and Peter Ligon at RE Gallery. Those are the ones I’m looking forward to right now.

CR:  I sometimes have a hard time understanding why Ligon doesn’t have the traction of, I don’t know, David Bates. That’s not really fair, I understand; Bates is incredibly ambitious. But with the prices and accessibility, why isn’t a little Ligon in every local collector’s house? And I happen to like the cute ones.

BD:  He’s a little like Bates. But he doesn’t hook into that Texas mythology thing. He needs to paint fishin’ shacks ‘n’ armadillos.

CR:  I love his drawings too but I don’t think this is a drawing show. Let’s put a pic in here of your more favored Ligon, so people can see the difference between his cute and not-cute.

Texans I guess don’t want to look at New England. But he’s done a lot of Dallas pics. 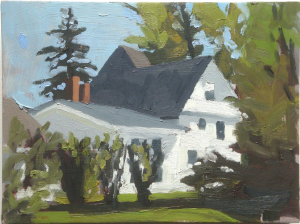 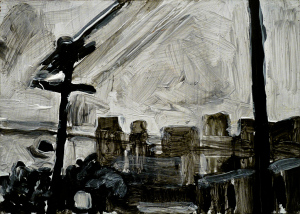 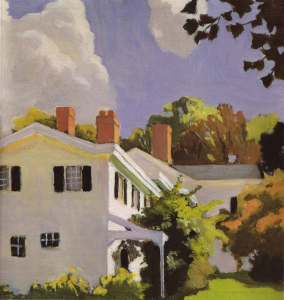 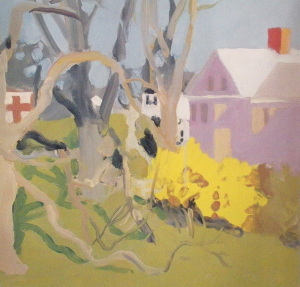 BD:  I much prefer Ligon’s Dallasscapes© (persons wishing to use my new word must pay a modest licensing fee)

CR:  He really does drive around, stop his car, and draw and paint. Parking lots and old abandoned restaurants 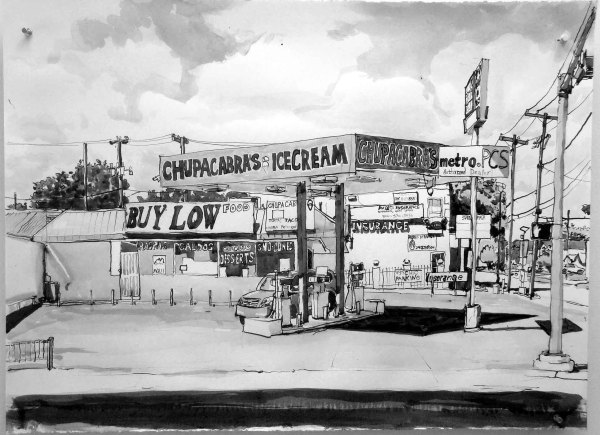 BD:  That’s way cool. Any excuse to practice art outdoors. Gimmicky as it was, I loved the guy who painted banks on fire in front of actual bank buildings. Alex Shaefer. He was arrested a few times for freaking people out. I think he was inspired by Ruscha’s LACMA on fire.

Very similar painting style to Ligon’s, too. He sold his art on Ebay, as well as through galleries; this was only last year. He’s probably still at it.

CR:  I will look for a pic: Oh wow! There’s some Ludwig Schwarz in those, too. 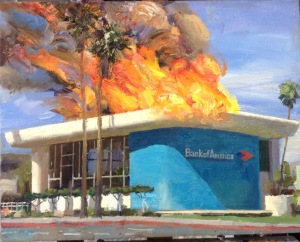 Even if Christian Marclay wanted to sell Clock on Netflix, he couldn’t. He would have to track down and buy permission from every single one of the rights holders of the films–probably an impossible task and prohibitively expensive to boot. That’s why it has to be limited to an edition of 6 (with 2 artists proofs)–that allows the appropriation to be considered “fair use”.

That doesn’t explain why other video artists can sell editions, although usually there is some hardware involved (multiple TV screens for multi-channel works, for instance).

I should have known.

Thanks BD and CR for the mention in your Sopa de Albondingas.