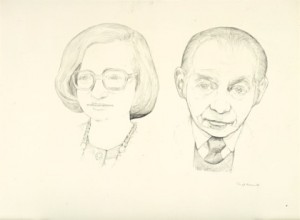 Postal worker Herbert Vogel who, along with his wife Dorothy, a reference librarian, amassed a monumental collection of apartment sized works by a who’s-who of modern artists, has died. The Vogels, immortalized in the 2008 movie “Herb and Dorothy”, stand as an example of how (in the 60’s) big money wasn’t a prerequisite for serious art collecting. The Vogels stopped collecting in 2009.

50 works from the Herb and Dorothy Vogel Collection are currently on display at the Blanton Museum in Austin. They represent the Texas segment of the Vogel’s extraordinary 50/50 program, which distributed fifty works from the couples enormous collection of modestly-sized modern art to a selected institution in each of the fifty states, leaving more than half of the 4,750 works at the National Gallery of Art in Washington D.C.

Free museum days just around the corner; some...

I don’t think “big money” is a prerequisite for art collecting even now if you collect the way the Vogels did–buying directly from the artists when possible, buying drawings and other works on paper mostly, and being assiduous in your collecting.

Furthermore, when you think about it, the Vogels actually spent a LOT of money. The story is that his salary was used for art and hers was used for them to live on (which was doable in part because they had no children and lived in a rent controlled apartment). They started collecting in the “early 60s” according to what I’ve read. So let’s say it was 1963. And let’s assume Herb’s inflation-adjusted salary was a constant $40,000 a year (that would have been about $5000 or $6000 in 1963). Let’s say $30,000 after taxes. That means they spent $1,380,000 (in 2012 dollars) over the course of Herb’s lifetime. Admittedly against some auction results, that’s small potatoes, but for most people–even most serious art collectors–that’s a substantial amount of money.

In my opinion, there are two interesting things about the Vogels. First is that they had unusually good eyes–they were among the first collectors to buy works by many of the artists they collected, and a surprising number of the artists ended up becoming quite well known. The second was that they devote half of their after-tax income for 40-odd years to buying art. I can’t imagine doing that.

But anyone can be a collector. There are opportunities to buy art for reasonable prices all the time, if you seek them out. Achieving a Vogel-level collection is as out of reach to most of us as is buying a Giacometti at auction–but I contend anyone with a half-way decent income can have a perfectly satisfactory art collection if they try.