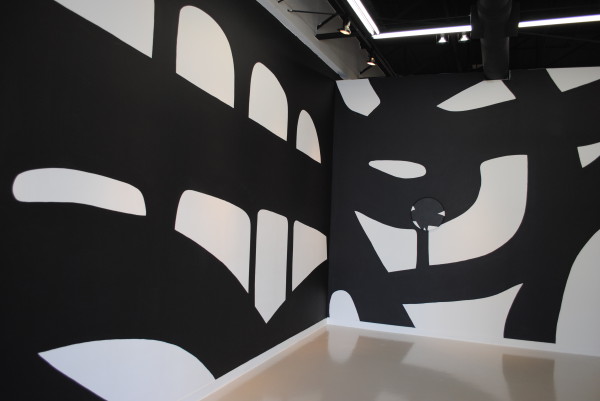 James M. Rizzi’s Linescapes is visually striking. Floor-to-ceiling black swashes of paint tattoo the otherwise pristine white walls of Circuit 12 gallery in Dallas. These enormous murals are punctuated by individual tondos that protrude from the wall featuring similar designs, as well as a cluster of smaller framed works on paper done using Krink markers. The overall effect is nothing short of sexy, and in fact, the gallery has started monitoring camera use due to an influx of selfies taken in front of the mural, which seems to be the new gold standard for clocking artistic spectacle. But from a critical standpoint, this show makes for a less than stellar experience. 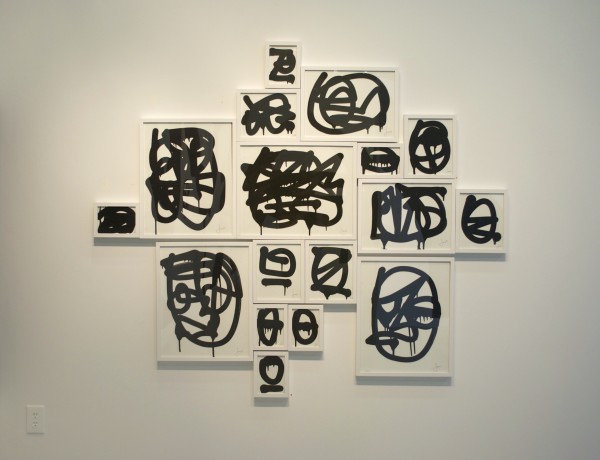 It’s too easy to read: graffiti meets Abstract Expressionism, but cleaned up and lacking the hurried rawness or energy of either genre. Instead, the lines are crisp and graphic, traced out ahead of time, eliminating signs of the artist’s hand. Even the “drips” of the mural are calculated beforehand, an aesthetic allusion to the trademarked drip-style that Krink creator Craig Costello markets with his art supply company.  The mural is visually arresting, but what you see is what you get. 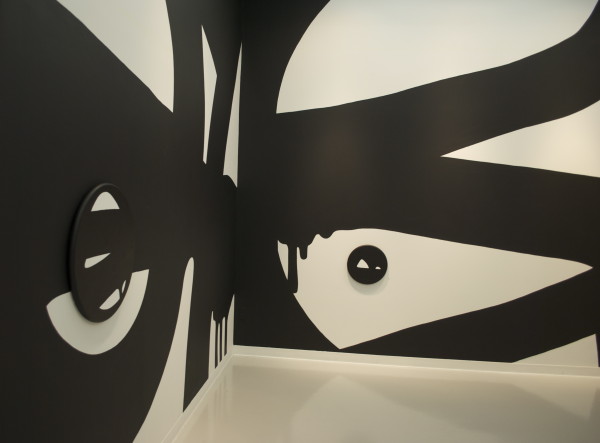 I realize there isn’t a rulebook on how this type of work has to be executed, but when an artist merges two styles together the takeaway from that act should be more rewarding than exclusively aesthetic parallels. Where Rizzi falters is that he takes Abstract Expressionism’s language of mark making, which is usually swollen with complexity, and reduces it to wallpaper— a pretty way to cover wall space without doing much else. Graffiti lines and Expressionist marks share visual characteristics, but that idea should be a starting point for a project, not the end destination. 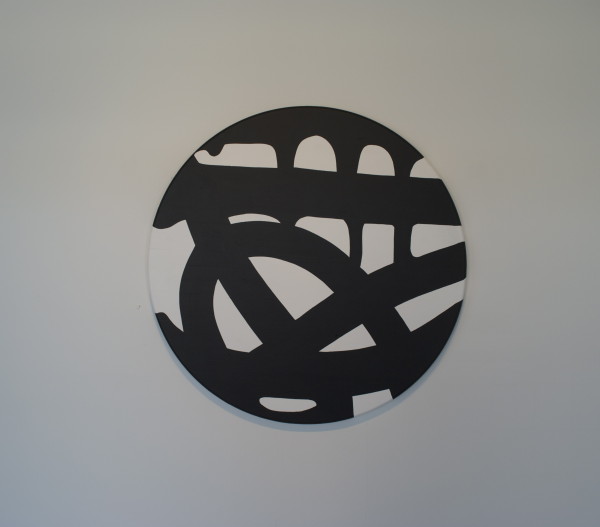 In the quick blurb about the show on the gallery’s website, Linescapes is referred to as a fusion of Abstract Expressionism and graffiti which “explores the appropriation of urban imagery in topographic terms.” This description, along with the show’s title, is the most conceptually interesting part of this show. If topographic maps are flattened versions of landscapes drawn in line, then it would make sense to think of “linescapes” as a flattened version of graffiti tags. This would explain the flat graphic style and it makes for a clever connection to Clement Greenberg’s essays on the flatness of painting.

All this would make for a fascinating association if Rizzi had found a way to execute the concept, but website blurbs are not art works, and looking exclusively at the actual work in the gallery, I think a viewer would be hard pressed to draw such conclusions. Topographic maps flatten with abstraction with the purpose of offering clarity. Linescapes flattens to the point of abstraction without much else.

To be frank, this show is eye candy. If it attempts to measure up to the really good graffiti-inspired DFW shows in recent years like Barry McGee at the Fort Worth Modern or even JR at the Dallas Contemporary (who embraced the selfie), then Linescapes stumbles conceptually, delivering not much more than an Instagram backdrop.

All too calculated for Alejo Benedetti. So is the review. Seems many people appreciated the installation. Must not be popular? This review sucks.

I couldn’t disagree with this review more. HJ Bott said it pretty well though I must say. The “Instagram backdrop” reference is not only inaccurate, but insulting. I thought this was a beautifully executed show that everyone at Circuit 12 as well as James Rizzi put a hell of a lot of work into. This article is not only hyper critical, its as if Lindsay Lohan from Mean Girls wrote it. I usually side with you guys more often than not- the quality of writing Glasstire is impressive and informative to say the least; but this “review” is a real let down. I go to almost every opening at Circuit 12, and let me say one thing- They never cease to impress. We are talking a gallery curated, run, and operated by 2 incredibly dedicated people here guys. Give a little credit where credit is due.