One of the better shows currently on view in Dallas, Amy Myers‘ Atomic Cosmologies at Talley Dunn Gallery presents large drawings that marry curved with rigid and finished with unfinished. This string of binaries permeates the works, resulting in a depth and complexity that emanates from the grandest arcs to the smallest scribbled footnote. 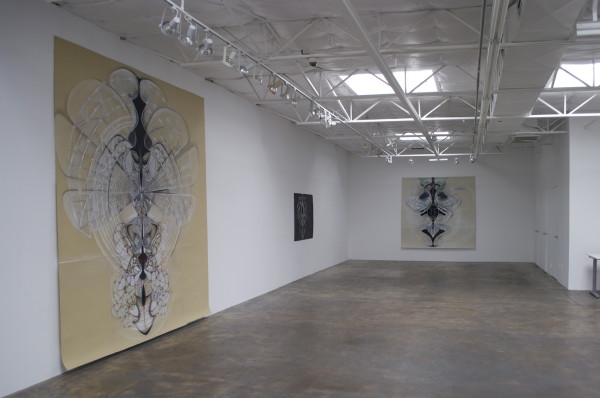 Myers’ curves and straight lines create designs that are technically complex and visually satisfying. The contrast of these lines is echoed in the use of muted grays and browns with occasional punctuations of day-glow color. Some works are comfortably sized, while others are floor-to-ceiling behemoths, pairing heavily worked sections of the multimedia drawing with passages of frail graphite lines.

The images are symmetrical, but without scientific precision, like the work of a well-practiced, but human, hand. The semi-symmetrical forms are placed slightly off-center. While this may aggravate perfectionists, the slight shift in placement saves these works from a sterilizing equilibrium. 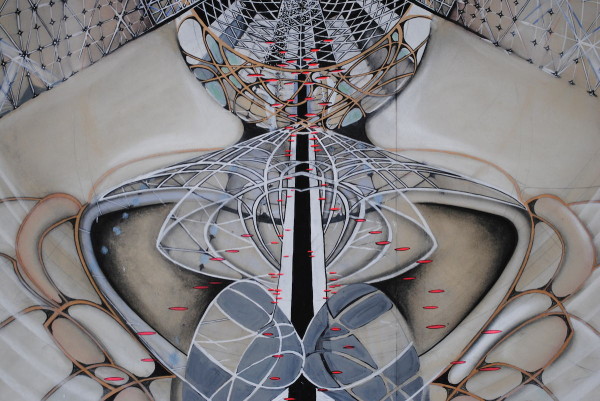 Myers’ work is inspired by atomic structures and scientific theories. Math and science have been mainstays of art for years, populating the work of artists as varied in style and notoriety as Hiroshi Sugimoto and Mars-1, but whether Myers’ works recreate specific atoms is of little importance. Her complicated and ordered structures carry an aura of mathematic roots, if for no other reason than their resemblance to Spirograph drawings. 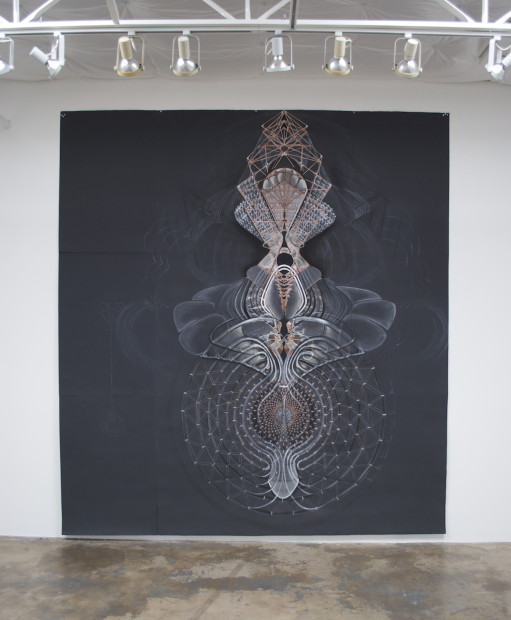 Myers carves out her own place in this flooded field by removing the front to reveal the unapologetic elbow grease that goes into her pieces. Myers’ works are like the turtle-necked physics professors behind Apple’s well-polished façade. Look at the presentation decisions: creating the work on a grid of separate sheets of paper reinforces the scientific connection, and the occasional unevenness of the grid and the unfinished edges of the paper add an inexactness and patina. Each work’s primary image, the atomic structure, is finished and heavily worked, but is surrounded by penciled-in preliminary lines and scrawled notes similar to those found on a schematic drawing or sketch. Even the finished forms contain noticeable holes; they mark the center points from whence the designs radiate, a nod to the physicality of the their creation, and reiterate the importance of Myers’ process. 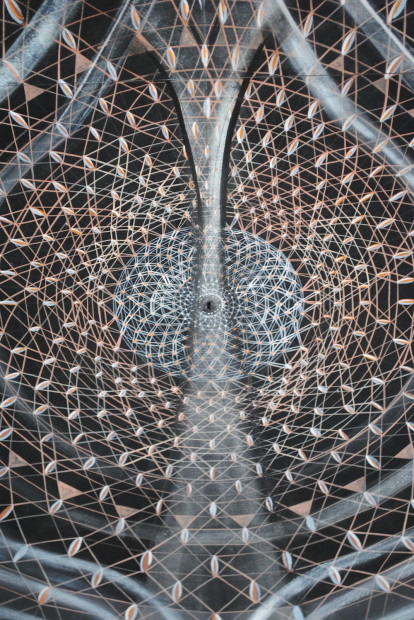 What seals the reading of these works as a play between refined and unrefined is the way they are hung: with pushpins. Under normal conditions the only reason that I would bring this up is to berate a gallery for using a hanging method that is so (pardon the pun) tacky. In this case, however, the work is actually improved: the pushpins are clustered in uneven groups, amid puncture marks from previous hangings, as if they came directly from the artist’s studio, reminding viewers of the interplay between final product in a high-end gallery and work in progress. 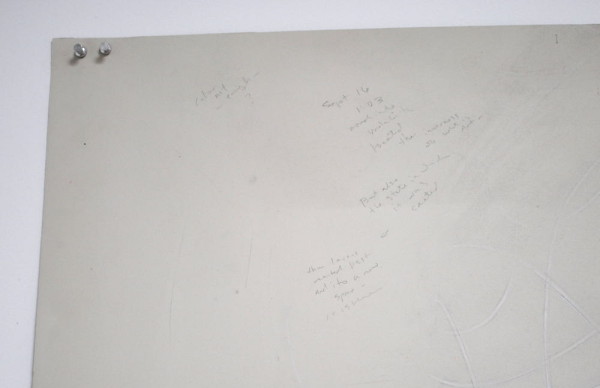 Amy Myers: Atomic Cosmologies will be on view at Talley Dunn Gallery from June 7- July 12, 2014.

Talley Dunn Gallery Introduces Its “Equity in the...