by Alejo Benedetti May 29, 2014
FacebookTwitterEmail

Banal, low, cast-off: these are all words that could accurately describe the San Francisco-based Sandra Ono’s material list for low tide. While sandwich bags and shoe inserts are not particularly spectacular in everyday life, in the hands of this artist, moments of virtuosity punctuate the plain and ordinary with twinges of comedic clarity.

The show at Dallas’ Conduit Gallery is sparse and understated. Though the works are assembled collections of junk, the space is anything but a hoarder’s trove of keepsakes. Instead, banal materials have been assembled into two strains of works: lurching masses and ethereal constructions. 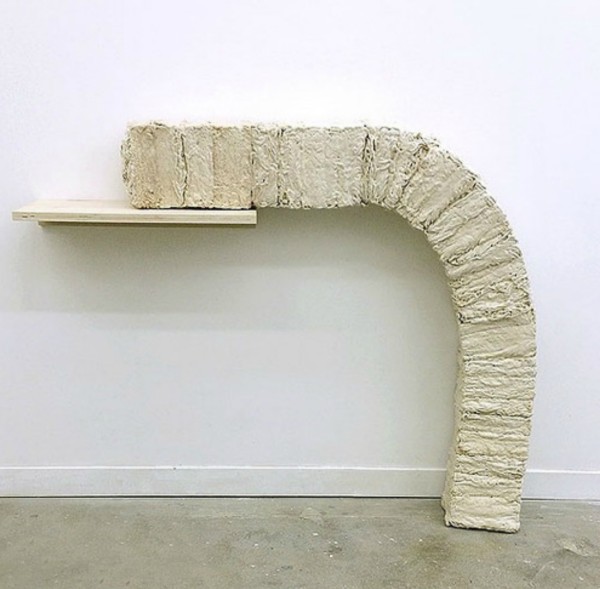 The more substantial and hulking pieces include everyday objects like mop heads and shoe inserts, which are stacked and fused together. These two works exude an air of sturdiness and quasi-monumentality, but they are far from the sincere attempts by minimal artists to create reductive monolithic objects. Ono’s works hearken back to her West Coast predecessors like Mike Kelley and Ed Kienholz with castoff materials and self-effacing humor, but with greater restraint and reductive tendencies. Substantial yet farcical, the mop head work bends and rests its bulk on a wooden ledge. Similarly, the collection of fused shoe soles leans against the wall, unable to stand on its own, a possible subtle and lowbrow nod to the West Coast minimal artist John McCracken’s planks. Both works, given status and presence through their assemblage, have a newfound vulnerability in their awkward mass. 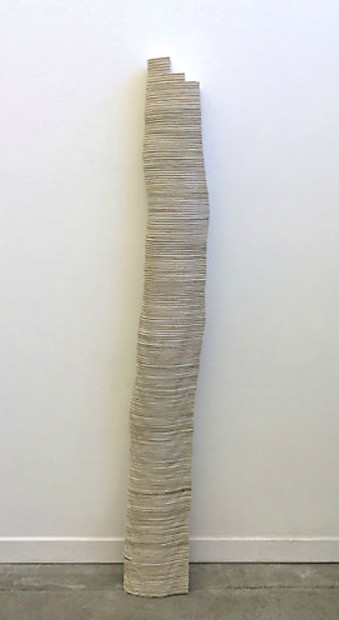 That sense of vulnerability mixed with comedy continues with the other strand of Ono’s work. In the sandwich and trash bag pieces she manipulates her materials in different ways.

With the untitled black-and-white “spiny” works, the artist creates a playful dichotomy. Had they been done in a more menacing material than plastic bags, the pointed protrusions might have been threatening. At present, they prompt connections to sea creatures and Yayoi Kusama’s appendage works. Unlike Kusama’s sturdy bluntness though, these works seem breakable and delicate. Even when sagging under their own weight as they hang off the wall, the protrusions glisten under the gallery lights and add preciousness to the sense of “the everyday” even while retaining their comedic obscurity. 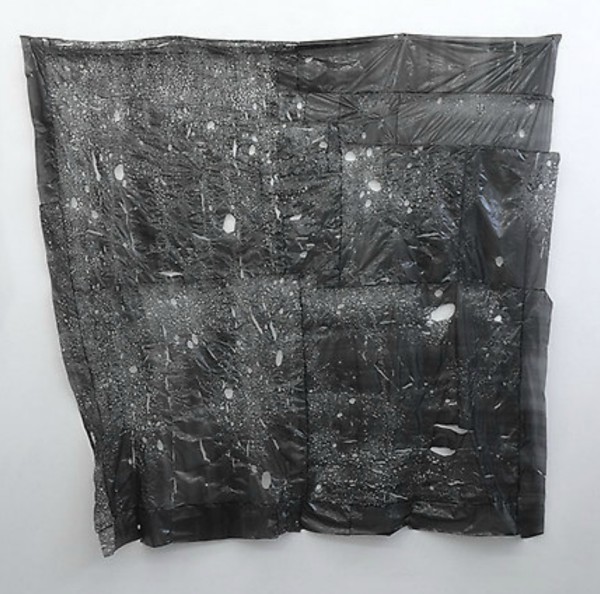 The other untitled trash bag work operates similarly. Carefully pieced together from independent rectangles, the work alludes to patchwork quilts even as it subverts this tradition. The sections of plastic have been heated and weathered, creating holes and puckering that make the bags brittle and fragile. The now-flimsy wisps of trash bags gently sway back and forth every time the air conditioner turns on in the gallery, reinforcing their weightless insubstantiality. Along the upper edge of the piece, Ono’s delicate creation is pierced and unceremoniously nailed to the wall, a reminder of the interplay between the gentle and severe, a theme that runs throughout the show. 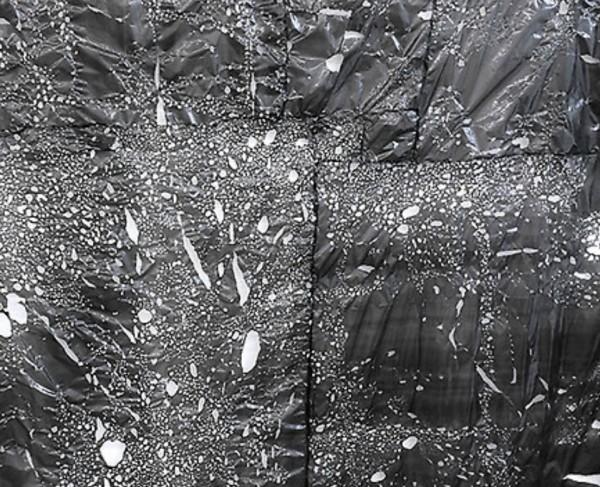 low tide is a balancing act. The materials are rough, but seen through Ono’s lens they become refined and delicate without ever truly abandoning their origins. While many found-object artists attempt to aggrandize the ordinary, Ono recognizes her materials for what they are. The works are beautiful, delicate, and have a commanding presence, but they are also in on the joke.

This and That: John McCracken and IKEA