by Kristen Cochran May 25, 2014
FacebookTwitterEmail

The 4th round of the Deep Ellum Windows projects, organized by Jeff Gibbons and Justin Ginsberg, presented four interactive and performative works in repurposed Dallas storefronts. Of these four shows, I was unfortunately only able to see three. They included a romp, a stomp and some monster trucks. 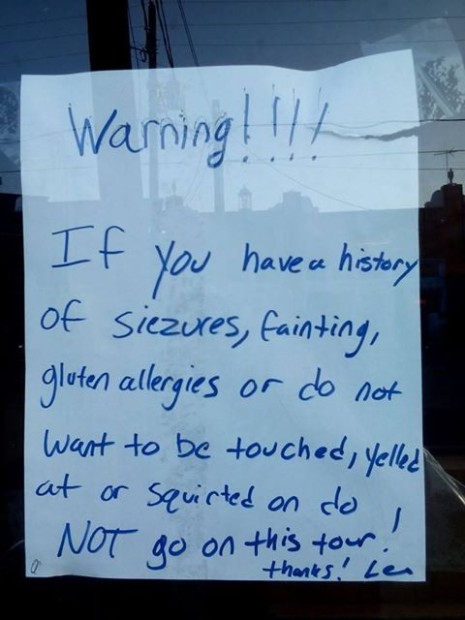 I arrived at 2810 Main Street as the last of the hourly tours of Lee Escobedo‘s nightmarish performance, It’s Living That’s Cursed, scuttled off into dingy debauchery. To be frank, I was relieved I was late as my unpunctuality saved me from something sinister—a group of ghouls masquerading as artists: I dodged Satan’s seed, avoided seizure-inducing strobes, and evaded some sort of gold-faced Grim Reaper. It’s Living That’s Cursed forced participants through a one-way narrative maze that they were obligated to finish once they entered. As they weaved through tight spaces and dimly lit corridors, costumed performers acted out what seemed to be a variety of curses upon them. Some used objects as props; others used video clips to enhance their narratives and add to the sensory overload. Whatever strategies they used, the artist-performers did their best to mess with and terrify passersby by sneering and slithering, spewing and squealing. 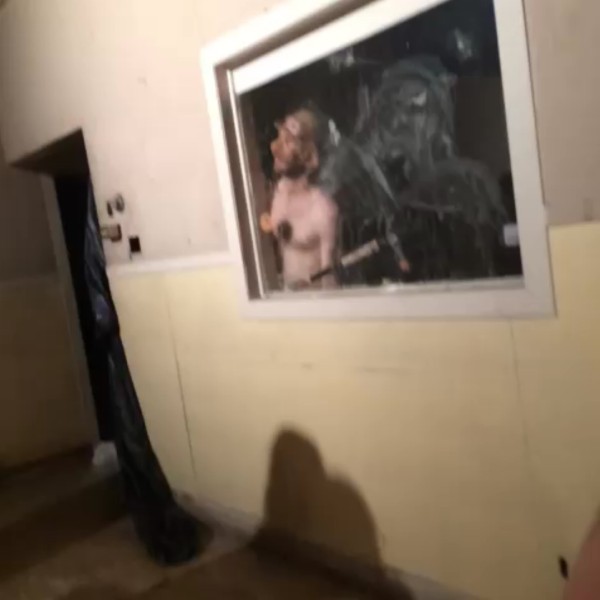 My brief encounter with this grit and gruel left me disturbed and curious. What was up with this hokey artgeist? Embedded within its freaky Paul McCarthy-esque form and effervescing beyond the smell of fake blood, body odor and petroleum-based prosthetics were some seriously dark themes.

It turns out that Escobedo’s haunted happening was riffing on a fundamentalist Christian scare-tactic from the 1980s and 90s. Generally referred to as Hell Houses, these controversial, conversion-aimed performances utilized traditional haunted house strategies to shock the living Beelzebub out of believers and non-believers alike. Destabilized and disoriented, tour goers were caught up in questions about eternal life, death and, oftentimes, terrified into “conversion.” So then, what was the counter-weight to the Hell House that Escobedo’s performance was pushing? Or was this carnivalesque romp all just fun and games?

At the conclusion of the hot and sweaty, almost hour-long tour, participants were invited to ‘drink the cup’—some sort of sugary juice alluding to the religious sacrament of holy communion and, according to the work’s title, a quote from cult leader Jim Jones, to the cyanide-laced Kool-Aid concocted by Jones for the Jonestown massacre. With both references in play, how was one to know whether the juice would bring life or ensure death? Through the roles of the performers in their controlled, cartoonish pilgrimage invited existential questions about the nature of belief, challenged the charisma of art cults and their leaders, and aimed to slice wide-open the politics of religion in a predominantly churched region.

Like its antecedent—the real life Hell Houses of the evangelical South—the show’s potency depends upon terrifying (or annoying the hell out of) tour goers: a stupid reminder that they are alive. Reimagining the Hell House phenomena seems to be an effort to undo it: Instead of foretelling one’s fiery death, the irreligious romp crudely affirms life by theatrically mocking damnation or cursed states.

With dumb antics, ridiculous caricatures, and claustrophobic practicalities, It’s Living That’s Cursed offered a stark alternative to the cool intellectual formalism that is a regional artistic trend. In Escobedo’s romp, flesh-ruled spirit and sweaty bodies overcame academic apparitions and theoretical holy ghosts. Although I’d prefer to be reminded of the blood coursing through my veins in another way, this work held unexpected potency. 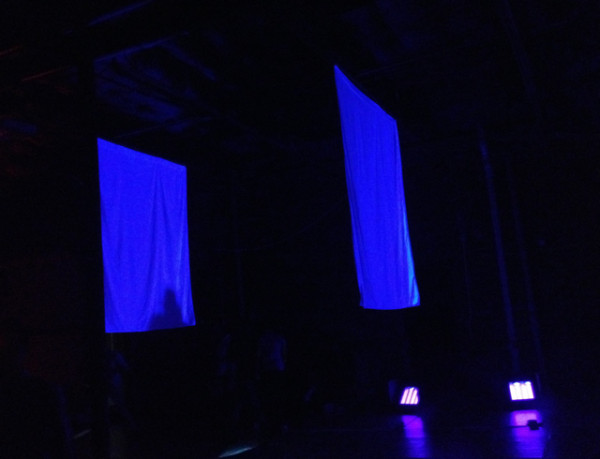 Sheets in the wind at Art Peña’s Nothing Lasts

Further down Main street, Art Peña’s  Nothing Lasts at the former Ruby Room elicited impromptu jigs and stiff-legged marches—both goofy means to activate his floor-situated, sonic sculpture. Peña tiled the warehouse floor with silver insulation board that seemed to be remnants of a former work. Digging heels or toes into the board liberated the pop, snap and crackle embedded in the porous polystyrene. Repurposed and situated underfoot, this simple material gesture celebrated interactivity and sensory experience over authorship and marketplace—refreshingly simple without being too cool or clever, self-conscious or smart, it offered a generous space for play. But what about the bed sheets? Like apparitions, three thin white sheets—ever so slightly tattered—hung from ceiling rafters overhead, serving as receptive surfaces for the activities below. These ghosts of paintings past suggested surrender. For Peña, is painting is dead? Doubtful. I expect to see those sheets, stains and all, in his next body of work. 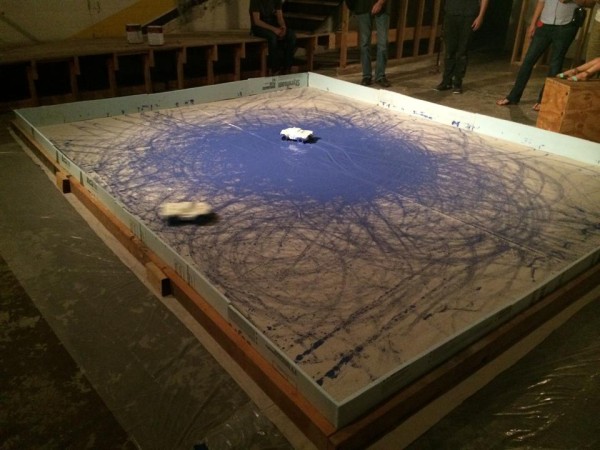 Across Main Street, two darkened rooms set the stage for a remix of Yves Klein’s anthropometry paintings wherein the artist slathered models in his signature blue paint and let them drag each other over canvas, making a painting. In this version, an interactive event called Sheer Speed, Dallas-based collective Art Beef subverted Klein’s controversial original by replacing boobs with bumpers, machismo with anonymity, and old school expressionist gesture with remote controlled, authorless automatism.

In the first room, a large luminous rectangle was projected onto the floor, surrounded by a handful of folks—some observing the virtual action and others directing it. Two small plinths supported remote controllers guiding mini-trucks in the next room. Mediated by architecture and remote control technology, the physical and virtual mini rallies, embodied vastly different energies. Those with controllers in hand, but cars out of sight, exhibited great gusto as they attempted to crash their virtual cars into each other or into the barriers that contained the action.

In the second room, the site of the physical rally, viewers also gathered around a ring—this time a 12×15 foot canvas situated on the floor and surrounded by a wooden frame. Unlike the first room, viewers had no control of what was taking place before them. They watched with anticipation as little white vehicles zipped around a paint-laden surface with some head-on collisions and many near misses. By the end of the night the canvas ring was covered in swirling circular marks—some of which revealed traces of tire tread. 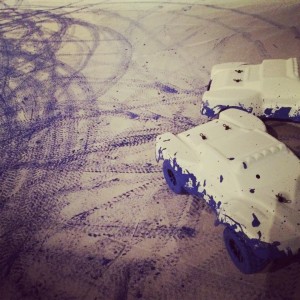 If you know about Yves Klein, International Klein Blue (IKB) and the original naked ladies, Sheer Speed was conceptually rich, multifaceted and just plain fun. If not, the products of the action were disappointing. ArtBeef’s specially-mixed, IKB was a bit dull, and the giant wheelie painting was a hairball of overlapping lines. Small cars splattered in blue paint and, although interesting to look at, were simply vehicles for something more: a slick version of Klein’s original, retrofitted for a Dallas warehouse.

Deep Ellum is Always On the Brink But...

You used my photo of the warning sign at “It’s Living That’s Cursed” without crediting me. Original found at my facebook page here:

Sorry about that Thor! We’ve credited you on the image. Thanks for bringing it to our attention.

Sorry about that Thor! Thanks for correcting Rainey.