by Lucia Simek May 2, 2014
FacebookTwitterEmail 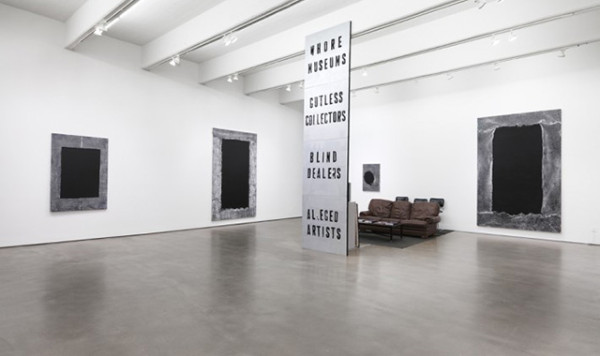 Ever the prankish knave of the art market, Houston artist Mark Flood will put on his art-star jester suit next week and stage a five day art fair in Chelsea, the navel of the art world, in what he has dubbed the Insider Art Fair. His fair will, ironically of course, come on the heels of the Outsider Art Fair–perhaps one of the most ironic and vampiric notions the art world ever had–in the same space. If any fact can be gleaned from Flood’s interview yesterday with Art in America, the fair will be a tongue-in-cheek. . . no, that’s too anodyne. . . start over: The fair will be a Duchampain-Broodthaers-Warholian lambast of the art fair model, leveled at all the “Whore Museums. Gutless Collectors. Blind Dealers. Alleged Artists.” Sort of.

“All the old art distinctions have broken down,” he told AiA. “Collectors are dealers. Consultants are curators. Galleries are museums and museums are auction houses. So I thought it would be interesting to see what would happen if an artist, such as myself, became an art fair.”

So yes, that is what it sounds like: “The Insider Art Fair is full of nothing but art by me, Mark Aurelius Flood; current work, future work, paintings, sculptures and certain wretched performances.”

Such wretched performances may include the participation of strippers and escorts that he has hired for the week, as well as the possible roping of one of his lusted-after lace paintings: “I thought it would be remarkable to drag one on a rope around and around the circular track of my fair, while groups of persons, representing collectors, crawl desperately after it on their hands and knees.”

The insider Art Fair, should you qualify for entry into it, runs May 13-18 at Chelsea’s 548 W. 22nd St., directly above Zach Feuer Gallery where Flood will concurrently have an exhibition called “Available NASDAQ Symbol” (May 9-June 14). That show will include text paintings as well as canvases that present manipulated corporate logos.

In the words of Andy Warhol: “Good Business is the best art.”