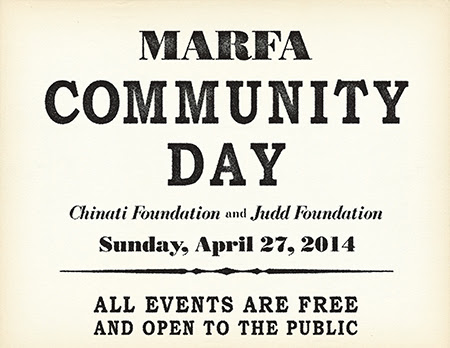 Few communities are close-knit enough to call to order an annual gathering and feast to celebrate each other and their space in the world, but Marfa, TX is one of those places. The West Texas outpost—part rancher wilderness, part artist enclave—is one of the few places in the US that can claim such a dicotomous identity and still seem to function peacably (at least on the surface).

The Chinati Foundation, the legacy of artist Donald Judd’s half-life spent there, hosts an annual party for the town every spring called Marfa Community Day—an all-are-welcome, look-at-art, and have-some-Mexican-food-and-beer fest. Chinati really throws its doors open to the public for this day, allowing self-guided tours of Judd’s home, the Mansana de Chinati/The Block, where much of his work is situated, as well as his studios. Visitors may also explore selections from Chinati’s permanent collection including the John Chamberlain building, Dan Flavin’s Untitled (Marfa Project), Donald Judd’s 100 works in mill aluminum and 15 works in concrete, Richard Long’s Sea Lava Circles, and Claus Oldenburg and Coosje von Bruggen’s Monument to the Last Horse, as well as participate in a number of other on-site activites.

Marfa Community Day is free and open to the whole wide world of anyone at all, from here, there or anywhere.