The Menil Collection unveiled plans for its new freestanding drawing institute on Wednesday and the reviews are starting to come in. One might think that Culturemap Houston’s hometown familiarity with the Menil aesthetic may have influenced its headline description of the building as a “modest stunner.” But Los Angeles Times Architecture Critic Christopher Hawthorne seconded the assessment, deeming the plans “deceptively simple.”

So it would seem that architects Sharon Johnston and Mark Lee, of the LA-based firm Johnston Marklee & Associates, might actually get the Menil thing. Hawthorne called the plans for the flat-roofed, pavilion-like building seemingly “self-effacing.” The Menil Drawing Institute will be modestly scaled: Hawthorne describes it as “bigger than a house but smaller than most museum buildings”; the Houston Chronicle points out that its16-foot height makes it no taller than the surrounding neighborhood bungalows. 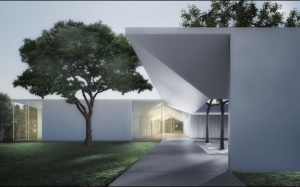 Hidden behind a group of large oak trees, half of its square footage will be underground storage. The ground level will contain a large, main gathering space called the “Living Room,” a private study space called the “Drawing Room” (get it?), an exhibition space, a library, rooms for seminars, courtyards and a conservation lab.

Hawthorne also points out that the design’s subtlety could make fundraising trickier than a campaign for a flashy building to be built by a flashy architect. But Menil Director Josef Helfenstein seems not to be worried about that at all. “We’re in good shape with the fund raising,” he stated. “We wouldn’t go public with the announcement if we weren’t.”

Construction is slated to break ground early next year and the building is set to open in 2017.