MoMA Bought Time to Come to the Same Conclusion: Folk Art Museum Must Be Demolished 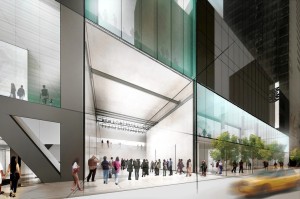 The Museum of Modern Art (MoMA) announced yesterday that its board has approved the initial details of its major building expansion project. In April, the MoMA made a similar announcement of expansion plans, which was to include razing the former American Folk Art Museum building, but was met with outrage and protests from preservationists, design critics and the general public. Within weeks, the MoMA backed down—or at least passed the buck. They hired the architectural design firm Diller Scofidio + Renfro to handle the expansion and to help determine whether to keep any of the existing structure. In yesterday’s announcement, Director Glenn D. Lowry wrote:

The plans approved today are the result of a recommendation from the architects after a diligent and thoughtful six-month study and design process that explored all options for the site. The analysis that we undertook was lengthy and rigorous, and ultimately led us to the determination that creating a new building on the site of the former American Folk Art Museum is the only way to achieve a fully integrated campus.

The idiosyncratic Folk Art building was met with love by many when it opened in 2001 and seen as a hopeful sign of recovery after September 11. But when it defaulted on its loan, the property was sold to the MoMA and the museum moved to Lincoln Square. The lingering love led to public outcry when last spring’s MoMA renovation plans included the building’s destruction. Even as the MoMA bought some time away from the critical spotlight, though, some involved in the planning told The New York Times that it was inevitable: “Everybody likes the building, but it’s hard to keep it—the floors don’t line up.”

The new plans look quite impressive and transparent (lots of glass!), adding a huge public access area and 40,000 additional square feet (for more details, read Lowry’s announcement of the project). But art critic Jerry Saltz—no fan of the original Folk Art building as an art venue—calls the new plans “pseudo-intellectual razzle-dazzle theatricality.” In last night’s column (in which he noted several times when he was tearing up), Saltz does not mourn the loss of the Folk Art building as much as that of the MoMA he once knew. “Good-bye, MoMA,” he ends his post. “I loved you.”