The saying goes that if you are a curator you educate yourself publicly. In other words, you are constantly in a process of learning and integrating that knowledge into exhibitions and public programs you produce. As a full-time student at Rice University, I have taken my education out of the public sphere for the most part. Still old habits die hard, so I thought it might be interesting to post on some recent discoveries.

Recently, I attended the College Art Association conference in Los Angeles, where professors, artists, students, publishers, and anyone affiliated with art or art history departments at colleges and universities gather to share ideas. The conference has changed quite a bit over the last few years. The field of art history is broadening, and their sessions more thoroughly consider artists and movements outside of the US and Western Europe and more ephemeral types of art such as performance and conceptual art. Consequently, I learned a lot about artists that I must admit I had never heard of before. Most are from Latin America, which only confirmed for me the importance of The ICAA Documents of 20th-century Latin American and Latino Art digital archive at the Museum of Fine Arts Houston.

Here they are– five artists/art collectives, who I think are great, that I learned about at CAA: 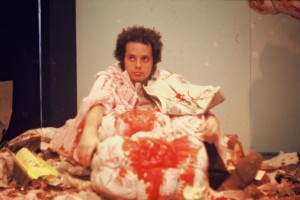 His “bloody packages” that he left in various locations around Rio de Janero in the 1970s were discussed in multiple papers at the conference. Barrio would wad up blood, nails, and other debris into small packets then leave them around the streets of the city to provoke reactions from passers-by. His project was politically charged because at the time Brazil was ruled by a military dictatorship, under which people would commonly “disappear,” their bodies never to be found. 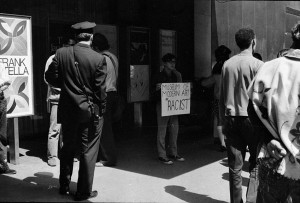 Caroline Wallace of the University of Melbourne presented her research on happenings as anti-institutional strategy and the Guerrilla Art Action Group, which staged unsanctioned protest actions in the Museum of Modern Art including an action where they removed Kazmir Malevich’s “White on White” from the wall and replaced it with their manifesto or a 1969 action in the MoMA lobby that protested the trustees’ connection to weapons manufacture during the Vietnam War by wrestling and smearing blood on themselves and the floor of the museum. 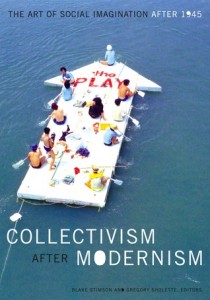 Reiko Tomii presented her research on The Play, an artist collective in 1960s Japan. Some of The Play’s most ambitious projects were to set out on voyages around Japan including a sea voyage on an arrow shaped raft and to build a mountain outside Kyoto.

Kate Palmer Albers mentioned Penelope Umbrico’s work in relationship to Gerhard Richter’s Atlas. Umbrico searches for “sunset” on Flickr then crops the thousands of images she finds down to just the suns then prints the results as wall-sized installations. 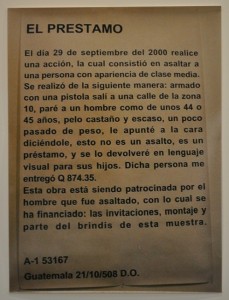 For “El Prestamo” or “The Loan,” Lopez, who sometimes goes by his Guatemalan ID card number A-1 53167, robbed a man at gunpoint and used the money he stole to fund his exhibition, which featured a poster explaining how the artist got the funds for the exhibition and reception. The visitors who came to see the exhibition, none of which condemned Lopez’s actions or reported him, thus became complicit in the crime.

Thanks for reporting from CAA Rachel. FWIW, Penelope Umbrico exhibited the Suns installation in Houston at Fotofest for 2009’s “POKE!” exhibition. The photos ran down the long hallway and was quite a sight. (Robert Boyd has a good pic of it: http://thegreatgodpanisdead.blogspot.com/2009/09/poke-and-topiary-text-lead.html) Interesting work, indeed.

That’s funny. I had totally forgotten until you mentioned it. Umbrico’s project must have been floating in my subconscious, which is why it stood out in a different context