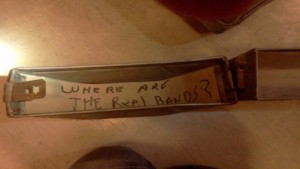 The American Genre Film Archive (AGFA) was formed a few years ago to archive 35mm film prints, focusing on the exploitation era of independent cinema—the 1960s through the 1980s (think B movies that usually involve some combination of vengeance, nudity, monsters, bikers, or women in prison). AGFA has over 3,200 prints, many of which they have never viewed, so they occasionally host a Reel One Party, watching the first 15-20 minutes of each reel.

Once in a while, one of these exploitation films becomes a cult classic. If you would like to be a part of that discovery process, you can sit with the AGFA folks tonight and decide the answers to such questions as “Is this so incredibly awful that it’s brilliant?” and “What in the world were these people thinking?” The Alamo Drafthouse-Ritz is hosting AGFA’s Reel One Party tonight (December 29) at 11 pm.