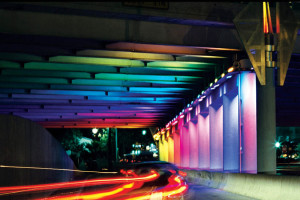 Bill FitzGibbons recently completed LightRails, a $200,000 public art light installation for an underpass in downtown Birmingham, Alabama. Originally, there were plans for three more like it, reports the San Antonio Express-News, but after REV Birmingham, the economic development organization that commissioned him, asked FitzGibbons for specs on the piece, they cut him out of future projects. It seems REV wanted to hand it off to Mayer Electric, a company that an REV board member just happened to lead.

FitzGibbons is well known for his large-scale light installations, including Light Channels (2008) in San Antonio (pictured above right). When the city of McAllen installed a similar piece recreated from design instructions found online, the artist threatened to sue. The city ultimately acknowledged FitzGibbons as inspiration and they came to an agreement.

It seems that the development organization is going to have a difficult time wriggling out of this since the tactic used by FitzGibbons and his attorney is the one-two punch of a stern lawsuit wrapped in guilt-inducing politeness. “I’ve got to tell you, it’s an ethical issue,” stated the artist’s lawyer. “What city wants to be accused of stealing some artist’s work?” And FitzGibbons graciously added:

“This is not the kind of publicity REV Birmingham wants nor deserves as far as I’m concerned. They have an outstanding mission. I’m a big supporter of the return to urban centers and enhancing urban centers with quality-of-life projects such as public art and parks. So it’s my hope that this will allow them to see a contractual issue that they maybe didn’t foresee, and we’ll come together and correct it, and go forward.”